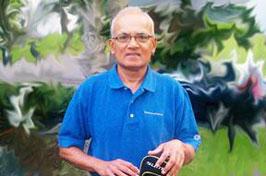 Manoj R. Shah, an electrical engineer at GE Global Research, has been awarded the prestigious IEEE Nikola Tesla Award for 2012. Manoj, who has worked at the center since 1999, is the fourth GE engineer to win the award since 1978.

The Nikola Tesla Award is the highest award by the IEEE in Electric Power Engineering. It is given to a team or to an individual “that has made an outstanding contribution to the generation or utilization of electric power.” Manoj was cited “for advancements in electromagnetic design and analysis of electrical machines.”

The Award was established in 1975 and is named in honor of Nikola Tesla, an electrical engineer, a distinguished Yugoslav-American inventor, and a pioneer in many fields, who is most renowned for the development of the coil that bears his name and the AC induction motor. Criteria include impact on technology, inventive value, breadth of use, leadership, and quality of the nomination.