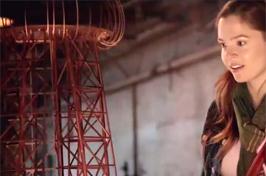 Joe Kinney, Senior Project Engineer of the New Yorker Hotel, contacted me recently to inform me of a new short film featuring Nikola Tesla. The film was produced by Ridley Scott Associates and was commissioned by AT&T to promote their mobile technology.

The plot of the story revolves around the main character's attempt to unravel the mysterious death of his father who was on the verge of discovering the secrets of Tesla's wireless power transmission. The film is action-packed and very interesting. It features a hidden Tesla laboratory (who knew Tesla had spun aluminum toroids?) and, according to Mr. Kinney, reveals secrets Tesla left behind at the New Yorker Hotel. Mr. Kinney tells me that the production team recreated the entire New Yorker Hotel's rooftop and sign on a sound stage in Los Angeles.

The film is divided into five parts, each around 10-15 minutes long, and the first three can be watched now. Parts four and five will be available within the next two weeks.

It's really nice to see the recent peak of interest in Tesla. Maybe soon his name won't be so foreign to the average person as it is now.