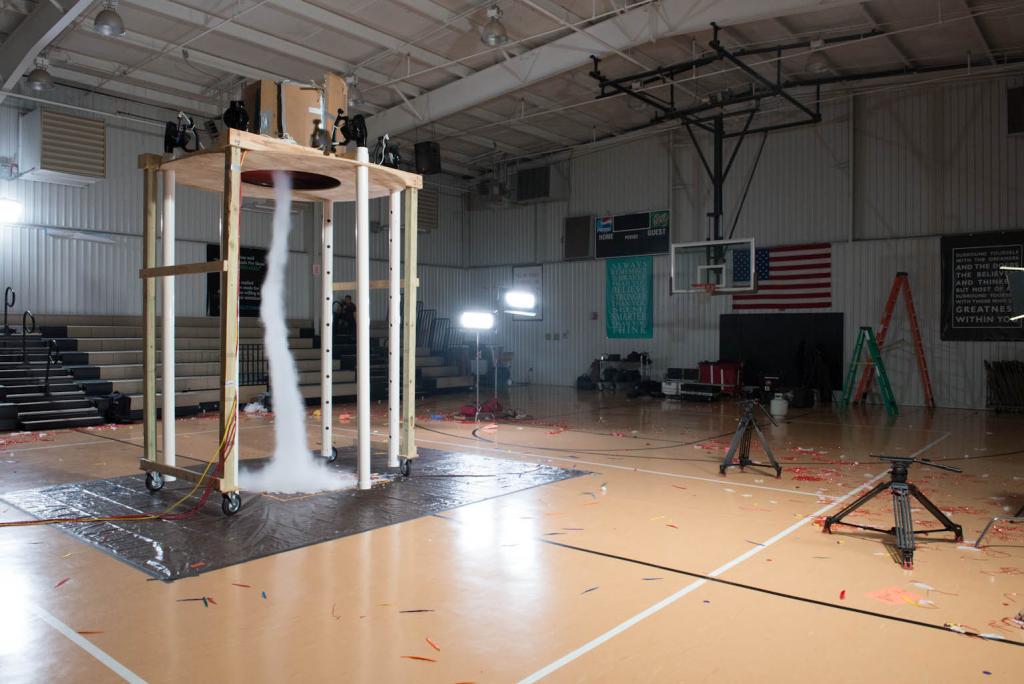 It's only a few days until the premiere of “Three Scientists Walk into a Bar” on The Weather Channel. One of the episodes that will be airing next Sunday night (barring any last-minute schedule changes) features the model tornado I mentioned in the previous post. It was one of the coolest things I did while helping with the show and I wanted to share a few details about it.

I had built a small model tornado when I was about 11 years old and already understood the basics of what was needed. But Travis wanted something big, like gymnasium-sized BIG, so we had our work cut out for us. We studied models built by others and set up the test rig you see in the photo to the left. One of the goals for the build was maximum visibility of the funnel, so we started out trying fans on the floor. A few times, a funnel would start to form, but it just wouldn't stay together. The circular airflow wasn't consistent enough to maintain it.

We decided on a design using 6 PVC pipes which would hang from an upper platform. The pipes would be capped on the lower end and would hold electric leaf blowers on the upper end. Yes, 6 electric leaf blowers! Holes along one side of each up pipe would direct the airflow horizontally and we could rotate each pipe to align the airflow with the other pipes.

The upper platform is made up of two halves to form an 8-foot diameter disc. We had to get the platform suspended in order to mount the legs, which were made up of 10-foot long 4x4 posts with large casters. The Harbor Freight Gantry Crane made this possible, but just barely.

In the center of the platform is the large fan which provides our updraft. We started out with a standard shop fan and soon found that it just wasn't strong enough to pull an updraft at the height we needed. We lucked out by finding a used 1.5HP industrial fan and things started coming together.

The funnel was still very inconsistent. It would appear for a few seconds, then randomly breakup for no apparent reason. What was happening was air being pulled up through the main fan was just circling back around the platform and being pulled right back into the fan. In other words, our baffle wasn't large enough. We solved this by adding a chimney of sorts around the main fan. This increased the negative pressure provided by the main fan and the more powerful updraft helped maintain the funnel.

It was a difficult build because so much of it was trial and error and it was stressful because of our tight schedule. But to see this thing in action is pretty awesome. I'm really proud of what we did and think it's going to make a great episode.

I hope you'll watch the show this coming Sunday night on The Weather Channel.