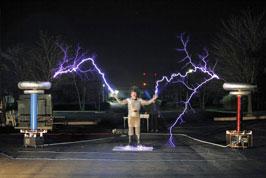 Our friends and fellow TU members Terry Blake, Jeff Larson and Steve Ward make up a group they call “Masters of Lightning.” The group was featured in an impressive and well-written Chicago Tribune article yesterday. Here's an excerpt along with a link to the full article:

The three use advanced industrial transistors to produce what is essentially 1.6 million volts of lightning to play music from Bach's Toccata and Fugue to the 8-bit theme from Super Mario Brothers. It works by precisely controlling the firing rate of the sparks, using them like a speaker to make music so ear-splittingly loud that last summer people living a half-mile away from the warehouse complained.

“When I first started making sparks, most people I know just thought that was insane,” says Blake, laughing. “ 'Why are you messing with lightning bolts in your backyard?' When I started putting on the suit and playing around with (the sparks), they were speechless. That was beyond crazy.”