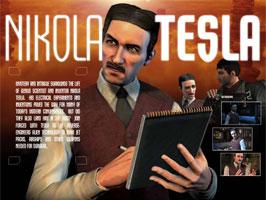 There have been many video games over the past several years that reference Nikola Tesla but the new “Dark Void” title from Capcom, which is scheduled for release in January, is the first to actually include Tesla as a prominent character.

The plot of the game centers around a pilot that crashes in the Bermuda Triangle and teleports to a parallel universe where he and other survivors must battle against aliens intent on conquering Earth. Tesla's role in the game is somewhat comparable to James Bond's Q. He reverse-engineers the alien technology so that it can be used against them.

Initial reviews of the game are very positive and many critics compliment Capcom for honoring Tesla. There are also reports that a production company owned by Brad Pitt has purchased rights for a film adaptation of the game.

Tesla Motors has teamed with Capcom to give away a new Tesla Roadster in a sweepstakes celebrating the release of the game. You can register for the promotion for your chance to win.

You can also visit the official Dark Void game site for more information.