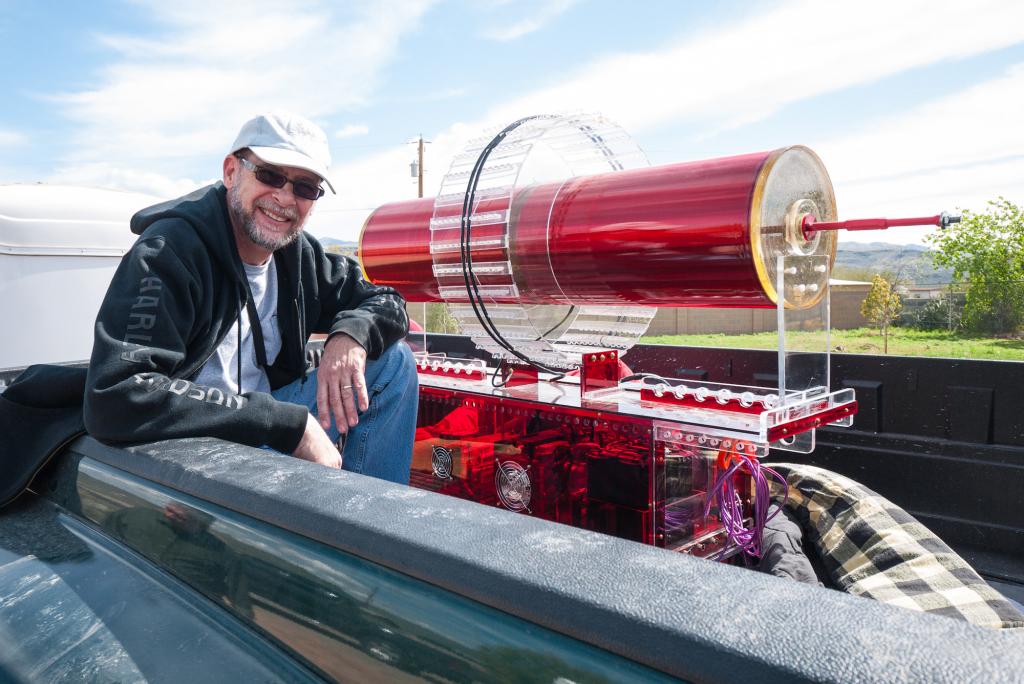 The 2010 Winter Western Teslathon was a great success and one the largest Teslathons I've ever attended, but it wasn't just a Teslathon. Christopher Hooper and Henry Hurrass of the Arizona Tesla Coil Builders made arrangements with the local elementary school to host the event in the gymnasium and provide a demonstration for the students the day before. New photos from Fred Gimeno have been added to the slideshow and you can tell from the children's expressions that the demonstration was a big hit.

While adding the photos from Fred Gimeno and John Forcina, Phillip Slawinski and I cleaned up and reorganized all the photos. We removed a lot of similar photos and a lot that just really weren't that good. What remains is the best of the best and I encourage you to take a look at the 2010 W.W.T. Photo Gallery again if interested. In addition to the photos, some additional videos were added to the Tesla Universe YouTube channel. We have a few more videos to add and possibly more photos. Please consider subscribing to the YouTube channel if you'd like to be notified when those are added.

At the end of the event, while packing up, Christopher was approached by a local official who congratulated him on the success of the event and spoke to him about next year. I won't steal Christopher's thunder by going into details, but let's just say that next year is already shaping up to be even bigger and better.

We certainly appreciate the efforts of Chris and Henry and their hospitality. Everyone had a great time, everyone acted safely and responsibly and all the equipment worked flawlessly. This is not something that can be said of most Teslathons and is a testament to hard work put into the event by Chris, Henry and the volunteers who helped them. Thank you guys and we look forward to seeing you again next year.

Well, we're wrapping things up and packing it in. It's been another great year for the W.W.T. I'll post the remaining photos and a summary report tomorrow, but here's a video for you to check out until then.

The 'thon is now well underway and the band has just started. Jeff Parisse took the first set as the drummer playing along with the “Stroker II” coil. There is a really impressive turnout of locals to participate in the event. Have a look at the additional photos. We'll wrap this up with a final post later tonight or in the morning.

We arrived at the school here in Black Canyon City, Arizona and everyone is setting up their coils and displays now.

Phillip, John, Steve, Terry and I took a little hike up to the top of this hill to take some nice panoramic shots. Take a look at the new photos. We'll check in later with an additional update.

Today is the 2010 W.W.T (Winter Western Teslathon) in Phoenix, AZ and we'll be heading over to help with set up shortly. I'll update this entry a little later with some additional details. For now, please enjoy the photos Phillip and I took of the pre-show get together and testing from last night. Without a doubt, Steve Ward's new Q.C.W. coil was very impressive. Also, please join me in congratulating Phillip for several runs of his D.R.S.S.T.C. with no explosion or leaked smoke. More later...