It’s a high-voltage apparatus that has earned a place in history. Now it’s your turn to get in on the fun! 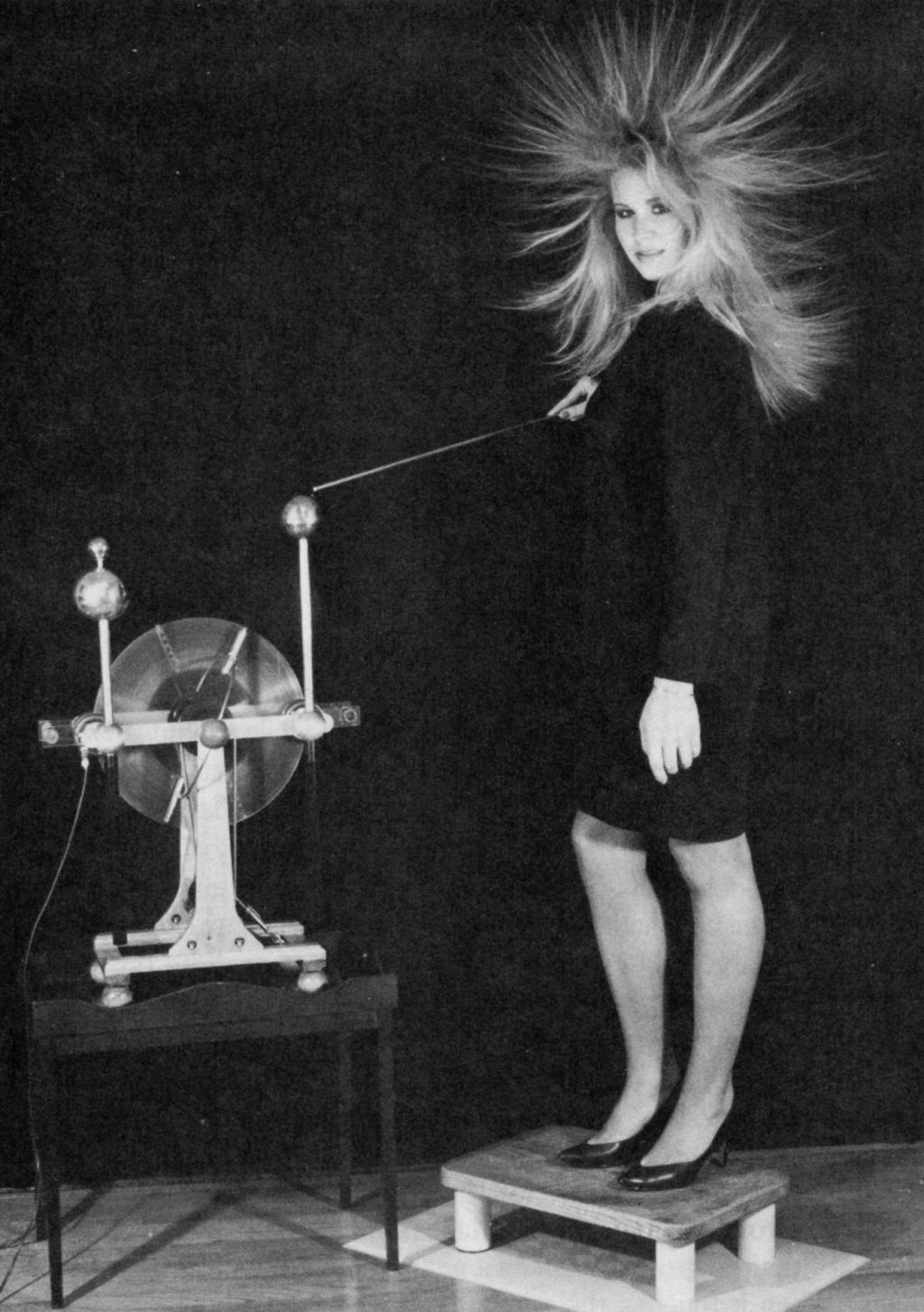 “Wimshurst machine? So that’s what it’s called!” my neighbor said, his eyes as wide as half dollars. I often heard that comment.

I took the Wimshurst machine off the shelf in my den and placed it on the desk before him. I turned the handcrank, the black plastic plates spun, and sparks jumped between the metal globes. “It will create 75,000 volts,” I commented. He leaned away from the machine. As the plates spun, the machine hummed and sparks snapped between the globes. The smell of ozone soon filled the room.

I’m sure that you, too, have seen a Wimshurst machine although you may not have known it’s name. You probably know more about its cousin, the Van de Graaff generator. Both are electrostatic generators, but that is where the similarity ends. The Van de Graaff generator creates static charges by friction, while the Wimshurst device does it by induction. In the early days of electrostatics, the principle of induction was also known as “influence.” In fact, the machine is more correctly called a “Wimshurst influence machine.”

Electrostatics was first noticed sometime in 600 BC when the Greek philosopher Thales discovered that amber attracted light objects when rubbed. The phenomenon not only demonstrated a fundamental concept of electrostatics, but also gave us the word “elektron,” meaning amber in Greek.

When Italian physicist Alessandro Volta invented the “voltaic pile” (or battery) in 1800, the science of electrostatics changed forever. Volta’s new invention provided scientists with a stable, dependable source of moving charges (i.e., DC). This invention was a turning point in electricity because now scientists could study electrodynamics, whereas before they were limited to studying electrostatics.

It’s been a while since the days of Thales, but we all know a few modern ways to make electricity by rubbing. Shuffling our shoes across the carpet on a dry day causes a spark between our finger and a metal doorknob. Likewise, rubbing a glass rod with flannel and then pulling them apart causes the flannel to hang unnaturally towards the rod. The rubbing action causes the glass to develop an abundance of positive charges and the flannel an abundance of negative ones. Once pulled apart, the difference in charge of the two materials causes the attraction of the flannel to the glass.

The same happens when you rub paper against a plaster wall or wooden door. It sticks to the vertical surface because the rubbing creates opposite charges on the paper and the wall. Try it with a balloon and you’ll see the same effect. In each of these cases, rubbing creates segregated electric charges and static electricity is the result.

In high school, you probably saw a Van de Graaff generator. It made sparks fly, fluorescent tubes glow, and your hair stand on end when you touched its dome. The Van de Graaff generator works in a way that is similar to rubbing glass with flannel, except that the rubbing is made continuous by using a moving belt inside the generator (see Fig. 1). As an electric motor turns the belt, metal combs in the generator’s dome and base strip charges from the belt. As a result, the dome and base develop opposite charges. Small, classroom-sized Van de Graaff generators produce 200,000 volts. Larger ones, like those used for sub-atomic particle research, create several-million volts.

Glass rubbed with flannel, and paper, or balloons sticking to a wall, and the Van de Graaff generator are all examples of creating static electricity using friction. That is also known as triboelectric charging. As we mentioned, there is another way to create static electricity and that is by induction.

John Canton, in 1753, was the first to put forward the concept of induction of charge. He demonstrated that when a charged body is brought close to a neutral body, the neutral body develops a charge of equal magnitude but opposite polarity. One of the earliest devices to demonstrate induction was the “electrophorus.” The electrophorus is the simplest electrostatic generator.

Later in 1787, Abraham Bennet, the inventor of the gold-leaf electroscope, developed the first simple machine to induce electrostatic charges. The device was called a “doubler” because of its ability to progressively accumulate static charges. His doubler did not use friction, but used Canton’s induction concept to generate separate positive and negative charges.

New varieties of doublers, or “influence machines” as they were soon called, were developed by Nicholson in 1788, Belli in 1831, and Lord Kelvin in 1860. Also in 1860, Varley built the first successful high-voltage influence machine. Other induction devices were subsequently developed by August Toepler and Wilhelm Holtz. But it wasn’t until 1878 that British engineer James Wimshurst invented the first dependable device to inductively generate static electricity. The Wimshurst influence machine was born.

The plates can be any sturdy, nonconducting material, such as glass or plastic (see Fig. 2). The plates are mounted in pairs, separated by a quarter-inch gap, on a horizontal shaft. The closer the plates are mounted to each other, the better the machine will operate. The plates are turned by belts and pulleys from a common crankshaft, but they rotate in opposite directions. A difference in pulley diameters causes the plates to spin several times faster than the handcrank.

Metal-foil strips called “sectors” are evenly spaced along the outer surface of each plate. Those help extract excess charges from the non-conductive plates.

The charges that accumulate on the sectors are removed by pairs of collecting combs made of tinsel threads. Each pair of combs is mounted on a U-shaped bracket, with one brush touching the front plate and the other brush touching the rear plate. The two U-shaped brackets are mounted opposite one another. They carry the accumulated charges to the machine’s discharge balls.

There are two “neutralizing rods” that span the diameter of each plate and also have metal tinsel combs on each end. The front and rear rods are perpendicular to each other and are positioned at an angle of 45° to 60° from the machine’s base.

In addition to the three basic parts of a Wimshurst machine, they typically have two built-in Leyden jars, which are very simple glass and foil capacitors. Each Leyden jar can be electrically connected to a collecting comb by means of a hinged rod. If the Leyden jars are not connected to the collecting combs, then a continuous arc jumps between the discharge balls when the handcrank is turned. If the connecting rods are lifted to touch the collecting combs, then a sharp (and intense) snap of electricity jumps between the discharge balls every few seconds.

It is important to notice that all the metal parts of a Wimshurst machine are built with rounded edges. A fundamental rule of electrostatics is that charges find it much easier to “jump” from a pointed surface than from a rounded one. Any sharp points on the machine would allow the charges to dissipate quickly.

Remember that the Wimshurst machine is an induction device. It doesn’t depend on friction to make an electrostatic charge. As you’ll see, quadrants of negative and positive charge are created across the plates by induction between the front and rear plates. As the plates rotate, these positive and negative charges are syphoned off through the metal sectors by the collecting combs.

As you may recall, the principle of induction requires that an object be initially charged before you can use it to induce a charge in something else. That holds true for the plates on the Wimshurst machine. Even before you crank the handle the plates have some static charges on their surface. The charge is created from the incidental rubbing and handling of the machine, and the machine actually amplifies this initial imbalance of charge.

You can see the charge leakage by placing the device in the dark, setting the discharge balls a good distance apart, and looking at its corona discharge radiating from the edges of the plates. You’ll also see tiny, purple arcs around all combs.

Setting the gap between the discharge balls an inch or two apart, causes a continuous shower of sparks to jump between the spheres. Connecting the Leyden jars to the discharge spheres allows you to separate the balls by a larger distance to produce big crackling sparks.

Here are some demonstrations that you can try with a Wimshurst machine. For instance, with the Leyden jars disconnected, move the discharge balls far enough apart so that there is no spark when you turn the handcrank. Light a candle and hold it close to one ball and then the other. At the positive ball, the flame will be attracted toward it, and at the negative one, the flame will be repelled.

For a different effect, start by cutting some kind of shape out of a piece of aluminum foil. A good example is a letter, such as T or L. Paste the aluminum design to a piece of cardboard. Using a knife or razor blade, cut the design in several places to create discontinuities in the foil (don’t let the cuts exceed 1/32 inch wide). Connect each end of the shape to one of the discharge balls. Run the machine and watch the arcs as the charges jump the cuts in the foil.

You must respect the potential of any electrostatic generator. Under normal use, they are safe, but you should not let that lull you into a false sense of security. You must never attempt to condense, or store, the charge they produce without full knowledge of its dangers. Simply said, avoid connecting any capacitor to any electrostatic generator. 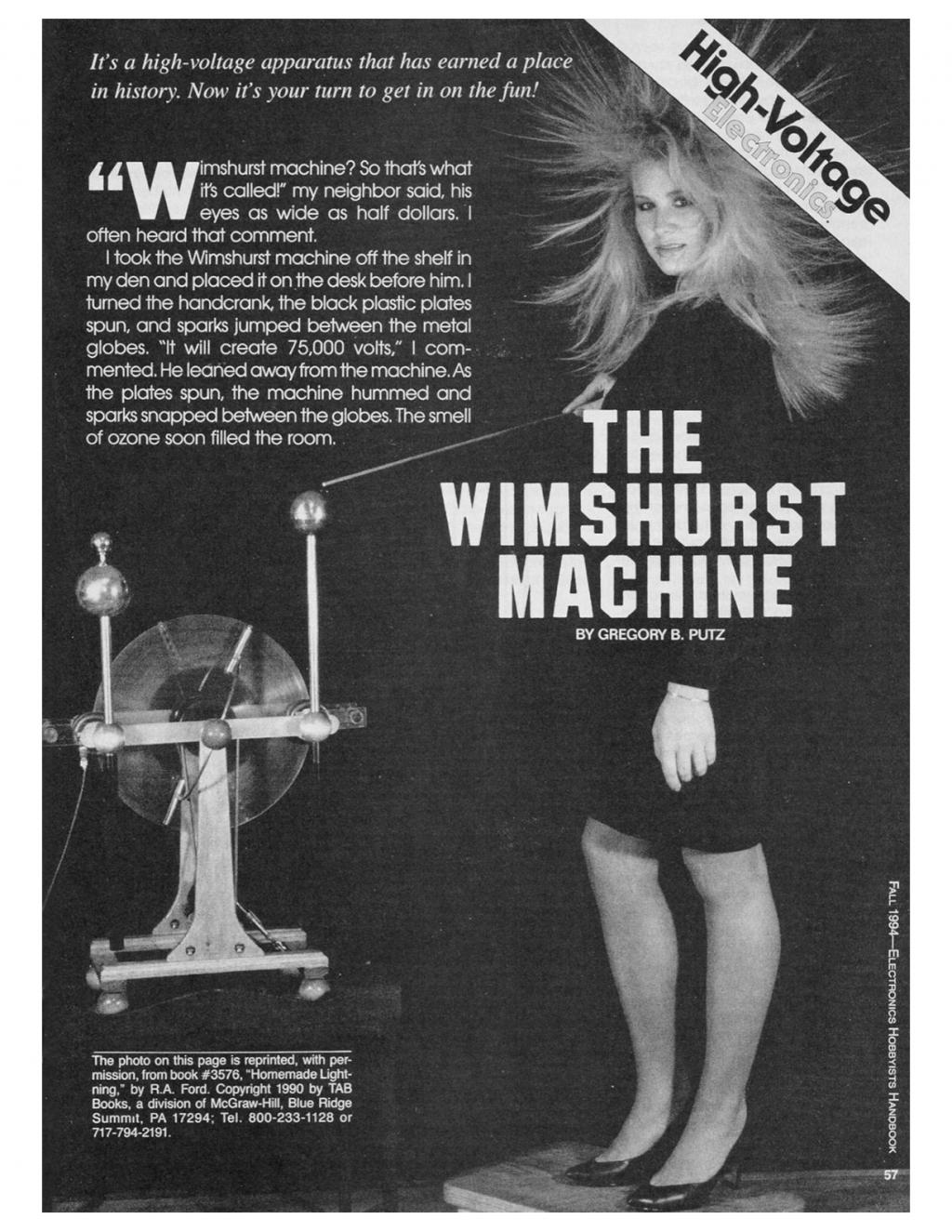