After Years of Neglect, Nikola Tesla is "in" in Croatia

Smiljan, Croatia - It’s one of the bitter ironies of this war-battered Balkan nation.

Croatia is feting the 150th birthday of its “greatest son” Nikola Tesla, one of the most eminent pioneers of electrical power. But hundreds of villages around his hometown have no electricity.

“Is this the 21th century? If Tesla rose from the dead, he wouldn’t believe it,” said Marija Batinic, 50, who lives in Podum, a hamlet just 25 kilometers (16 miles) from Smiljan, where Tesla was born at midnight during a lightning shower between July 9 and 10, 1856.

The villagers’ plight mirrors what happened to Tesla’s own reputation in the years after Croatia broke away from the former Yugoslavia. Some see a common root in the neglect: ethnic Serbian heritage.

Many Croats still harbor hatred for their ethnic Serb minority, whose rebellion against independence led to a catastrophic war that killed thousands and only ended in 1995.

The government has promised to restore electricity to some 300 villages as soon as it has the funds. But residents like Batinic believe they are being ignored simply because they are Serbs.

Tesla, who ranks with his rival Thomas Edison as one of the greatest inventors of the electrical age, became a forgotten figure in Croatia after independence.

His name was barely spoken, his inventions never honored, his house left to decay. His monument was blown up, and nobody cared. When Croatia switched to Croatian kuna from Yugoslav dinars, one of which featured Tesla, no one thought of putting him on the new banknotes.

But today, Tesla is suddenly “in” again, thanks to Croatia’s bid to join the European Union which has prodded it to make gestures of reconciliation.

Parliament recently declared 2006 his year and the government invested 56 million kuna (€7 million; US$8.75 million) to restore his birthplace.

Tesla was named Croatia’s “greatest son” in a recent poll. And his motto, “equally proud of my Serb origin and my Croatian homeland”, is ceaselessly repeated.

Tesla studied and worked across Europe, eventually settling in New York in 1885, where he became a naturalized U.S. citizen and lived until his death in 1943. He was awarded patents on every aspect of the modern system for generating and distributing electricity, including in radio and the modern concept of radar.

Those early 20th century breakthroughs play little role in Batinic’s life: her refrigerator serves as a closet, she warms the iron on a stove, and charges her cell phone on a tractor’s battery. A gas lamp hangs from the ceiling.

Some Croatians are not ready to forget the past. An artistic group from Croatia opened an exhibit to ridicule Croatia’s “new political correctness.” Among the exhibits: pieces of Tesla’s blown-up monument.

In Serbia, author Mirko Rapaic insisted on his Web site that Croatia has “no right” to lay claims on Tesla.

Even in his lifetime, Tesla was accustomed to enmity and neglect.

He fell out with Edison because the latter ignored his inventions in alternating current electricity. He sued Guglielmo Marconi to gain recognition for his inventions in radio. He died in a New York hotel poor, and all but forgotten.

Today, Tesla is honored as much in pop culture as in scientific circles.

He is a superhero in a Japanese comic strip and his Tesla electrical coil figures in the Lara of “Tomb Raider” series. Orson Welles produced a movie on Tesla in the 1980s. And he is portrayed by David Bowie in Christopher Nolan’s new movie “The Prestige.” 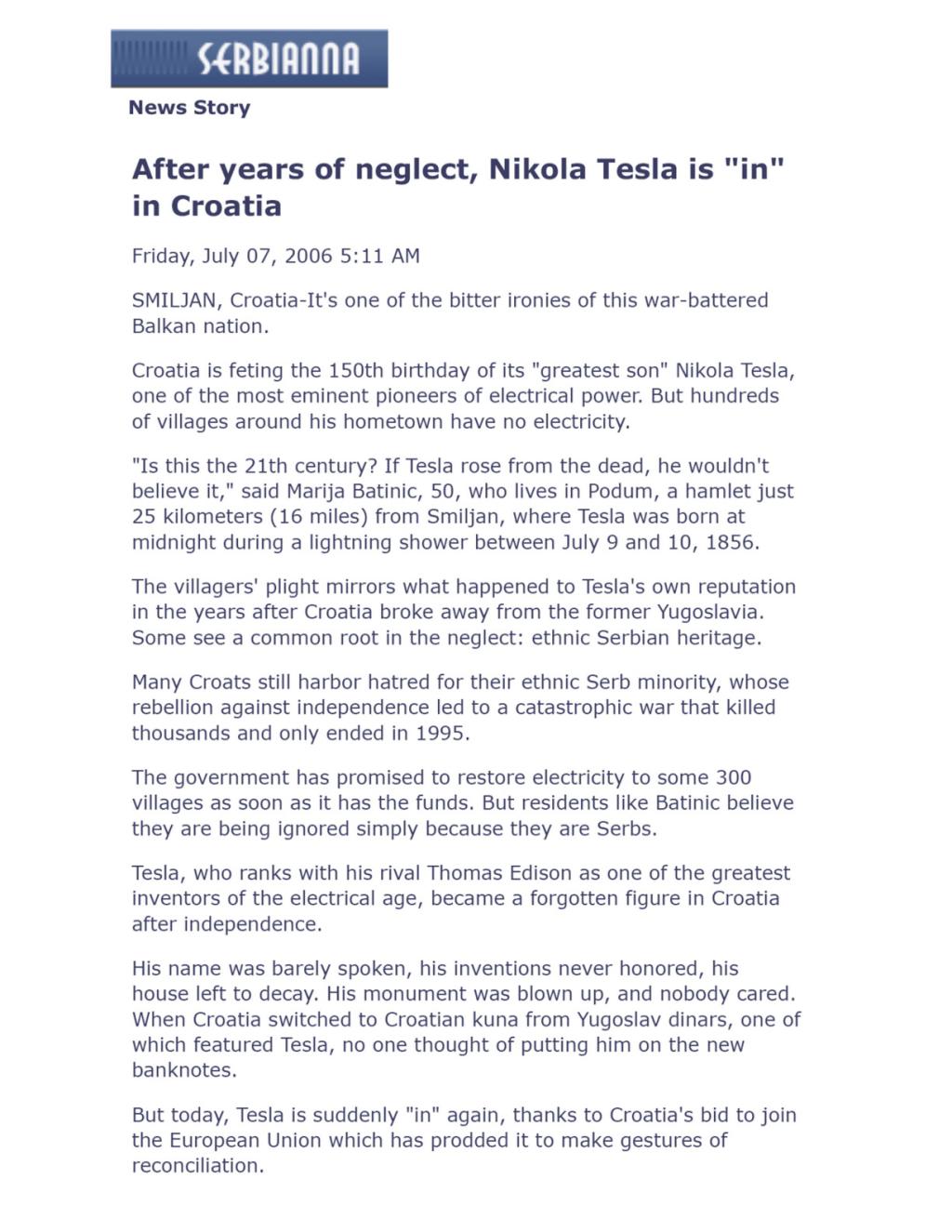