The Brilliant Experiments of Nikola Tesla, the Able and Progressive Young Inventor

One of the prominent features of the general meeting of the American Institute of Electrical Engineers, was the lecture by Mr. Nikola Tesla, on “Alternating Currents of High Frequency.” Wednesday evening of last week, Professor Dwights’ room at Columbia College, was filled to overflowing with an expectant audience eager to learn some of the results of Mr. Tesla’s patient labors in a field that he has made particularly his own.

Mr. Tesla began by pointing out that the highest aim of the human intellect is to discover the secrets of nature, and dwelt upon the fact that discoveries in the domain of pure science are invariably accompanied or rapidly followed by practical applications which redound to the benefit of mankind. Approaching the subject in hand he called attention to the fact that while the experiments and theories of such able investigators as Drs. Hertz and Lodge had greatly increased our knowledge of electric waves, their production, behavior and effects, yet these able physicists had devoted themselves more particularly to the study of electromagnetic waves, leaving on one side the static effects, which he, the lecturer, thought were of as great, if not even of greater importance.

With an alternating current of high potential and high frequency a very powerful electric field can be generated, capable of producing very startling effects, as Mr. Tesla proceeded to show. The machine for producing the current used in the experiments was an alternator, having 400 poles, and, although Mr. Tesla did not give the actual number of revolutions per minute, he stated that the periphery of the armature was traveling at about the speed of a bullet.

The frequency was stated to be about 18,000 to 20,000 complete alternations per second. By means of a large induction coil the tension of the current from this machine was raised to the extraordinary figure of 250,000 volts. Although the very sound of the words “a quarter of a million volts” raised a feeling of uneasiness in the minds of even the more experienced of Mr. Tesla’s hearers, the lecturer demonstrated the harmlessness of the high frequency current by grasping the two poles of the induction coil, one in either hand, and taking the full current of the secondary without apparently feeling the slightest ill effect.

One of Mr. Tesla’s strong points was the important part that condensers will play in the distribution of alternating currents of high frequency, and quite a number of his very beautiful experiments were designed to illustrate this effect. For instance, with the secondary circuit of the induction coil open, he showed that by grasping a metal sphere connected to one pole the discharge was greatly increased. This effect was due to the introduction of the extremely small capacity of the human body, which resulted in raising the potential of the secondary current, thereby producing the effect described. This action of a very small capacity was shown in a number of ways, and an extremely beautiful illustration was given by twisting a short length of cotton covered wire round one pole of the induction coil, bending the wire upward in the form of a twig. The lights being turned completely out, the discharge was seen to take place along the whole length of the piece of wire, and when the lecturer’s capacity was connected to the other pole of the coil the discharge was increased to a brilliant shower of sparks from the piece of wire.

To describe all of Mr. Tesla’s experiments, and all that he said could be done with alternating currents of high frequency, in the space we have at command, and writing as we do from memory only, would be manifestly impossible. He showed in many ways the effect of capacity on the current and thoroughly revelled in the electric field generated by his 400 pole alternator and powerful induction coil. Geissler tubes three feet long were converted into brilliant beams of light by being held near the coil or near a large sheet of tin-plate connected to one of its poles. The lecturer stated that had the time at his command permitted him to make the necessary arrangements, he could have produced an electric field capable of lighting up the whole room by means of similar tubes or lamps suspended at intervals from the ceiling.

With lamps, similar extraordinary experiments were shown. Here Mr. Tesla seemed to act the part of a veritable magician. It seemed to make little difference whether the lamps were lying on the table or whether they were connected by one terminal to one pole of the coil, or whether the lecturer took a lamp in each hand and held one to each pole of the coil, or whether he short-circuited them across a stout copper conductor (bent in the shape of a tall arch), which was being traversed by the current; in each and every case the filaments were brought to incandescence, to the supreme delight of the spectators.

Probably the interest of the various members of the audience varied according to their electrical knowledge or their thirst for it; to many of those present the experiments may have seemed somewhat in the line of a brilliant exhibition of fireworks. To others, who appreciated the true inwardness of what was being done and shown, and who followed the lecturer with rapt attention for three hours, it was evident that a distinct advance had been made in scientific research and that a vista of yet more wonderful results than those we have briefly alluded to above was opened up.

We understand, that even in the considerable time which Mr. Tesla devoted to our enlightenment, he was unable to show us all, or nearly all, that he was able to and had hoped to. In this case we trust that the Institute will prevail upon him to bring the subject again before its members, all of whom must assuredly be anxious to learn further what the results of his labors and investigations have been.

We take it for granted that Mr. Tesla has advanced his work on alternating currents of high frequency to within a measurable distance of elaborating practical applications for the production of light. Probably one of the most formidable difficulties will be found in the vexed problem of insulation. Mr. Tesla, for instance, showed that the discharge passed with the greatest ease through plates of hard rubber or glass and even through a thick book, considerable heat being developed in the operation, resulting sometimes in the welding together of the plates of hard rubber, if several were used.

It is questionable, however, whether the discharge in this case actually passes through the dielectric, piercing it. The more probable explanation of what takes place is that it is due to condenser effect, the discharge passing by reason of induction from plate to plate, or, from one side of the plate to the other, actual perforation of the plate only taking place when the dielectric is sufficiently heated by the rapid discharges to cause its conversion into a moderately good conductor. 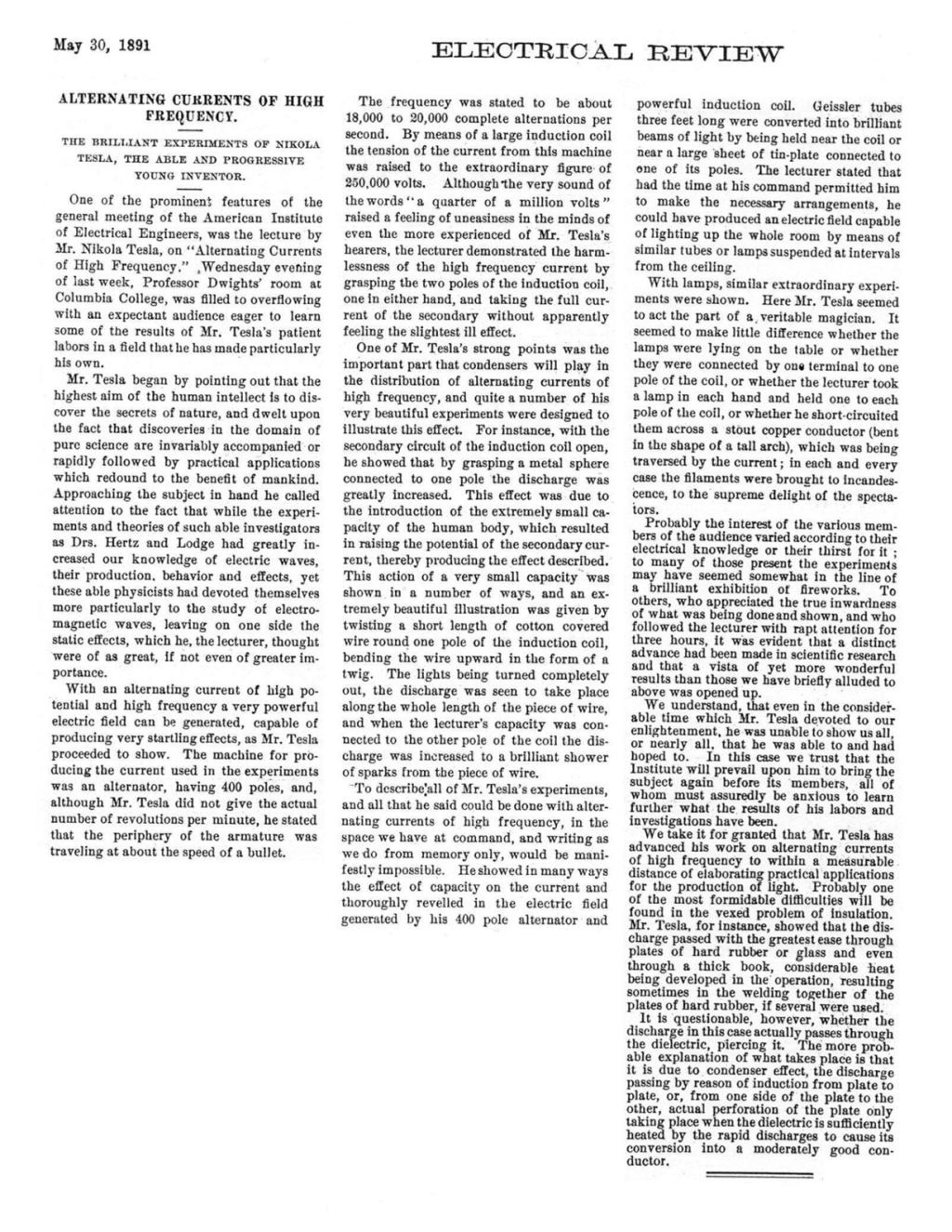