While the interest in all the papers of the annual meeting of the American Institute of Electrical Engineers was sustained throughout the sessions, there can be no question that most interest centred upon the lecture delivered by Mr. Tesla on the phenomena of alternating currents of high frequency. Mr. Tesla’s recent utterances on this subject had served to excite the curiosity of many, and we believe that a thorough analysis of the work accomplished by Mr. Tesla, as exhibited in the experiments shown by him, will lead to the conclusion that those expectations have been more than realized.

The brilliant researches and experiments inaugurated by Dr. Hertz, and followed up by Lodge and others, which served to verify the theory that the phenomena of light were referable to electromagnetic vibrations of the ether, seemed to point out an apparently easy way of obtaining illumination directly through the medium of electro-magnetic vibrations. It has remained for Mr. Tesla, however, to recognize that for the production of light, electrostatic effects are needed. He reasoned that it was impossible to obtain primarily the desired electro-magnetic effects, since we must work with bodies of infinitesimal dimensions which can be acted upon only electrostatically, it being evident that an electromagnetic wave cannot excite luminous radiation unless it be a true light wave.

To produce longer electro-magnetic waves would, therefore, be of no avail; but this is not the case with electrostatic waves or thrusts. These, no matter what their length, Mr. Tesla demonstrates, can excite luminous radiation by disturbing molecular or atomic charges, causing the molecules or atoms to vibrate and to emit light; and since electrostatic effects are dependent upon the conjoint effects of potential and frequency, this reasoning led him to the investigations, the results of which were shown.

Continuing the train of reasoning followed by Mr. Tesla, we see that he has recognized further, that electrostatic effects of such character are available in many ways for the production of light. Thus he showed that if a filament in a globe be connected with only a single terminal of the source, in consequence of the rapidly alternating potential, the molecules of the gas are strongly attracted and repelled, and in this manner by their impact a filament may be kept at incandescence with only one wire.

With these facts before him, and recognizing further that the employment of a filament is a bar to the attainment of higher efficiency on account of the limited degree of incandescence at which it can be run, Mr. Tesla reasoned that two blocks of a refractory material may be placed in a perfectly exhausted globe and sufficient energy transferred by condenser action to keep the blocks at incandescence, thus allowing a much higher efficiency in the production of light by reason of the possibility thus afforded of maintaining the carbons at a much higher degree of incandescence.

Mr. Tesla has also shown that it is perfectly practicable to transfer sufficient energy to the medium, from a single block or filament placed in a perfectly exhausted globe and connected with one wire to the source, to keep the filament at the desired incandescence. Another and most important fact which he demonstrated was the practicability of using tubes of rarified gas without any terminals as practical sources of illumination by simply creating an electrostatic field near them, and also of using lamps without leading-in wires.

All these results can evidently only be obtained by the use of enormous frequencies and potentials, or, in other words, powerful electrostatic effects, the study of which was made difficult in consequence of the fact that in previous experiments, looking to this end, the static effects were excessively small, owing to the fact that the coil was short-circuited through the low resistance discharge between the knobs of the discharger. The method of conversion devised by Mr. Tesla, allowing of the use of any frequency, enables us to undertake a much more exact and easy study of the effects of short waves.

Again, his experiments with the lamps burning when connected with their terminals to a short, thick copper bar, are extremely interesting. The possibility of verifying nodes on the bar by simply using a Cardew voltmeter will be of great value in investigating these phenomena. His experiments also prove that while, with alternating currents of low frequency, such as are now generally employed, the effects of self-induction must be largely considered, those of high frequency accentuate largely the condenser effects which have to be allowed for accordingly.

It would lead us too far to enter into all of the numerous points suggested by Mr. Tesla’s lecture, but he showed enough to warrant the assertion that in a comparatively short time the practical application of these principles to the production of artificial illumination will be an accomplished fact. 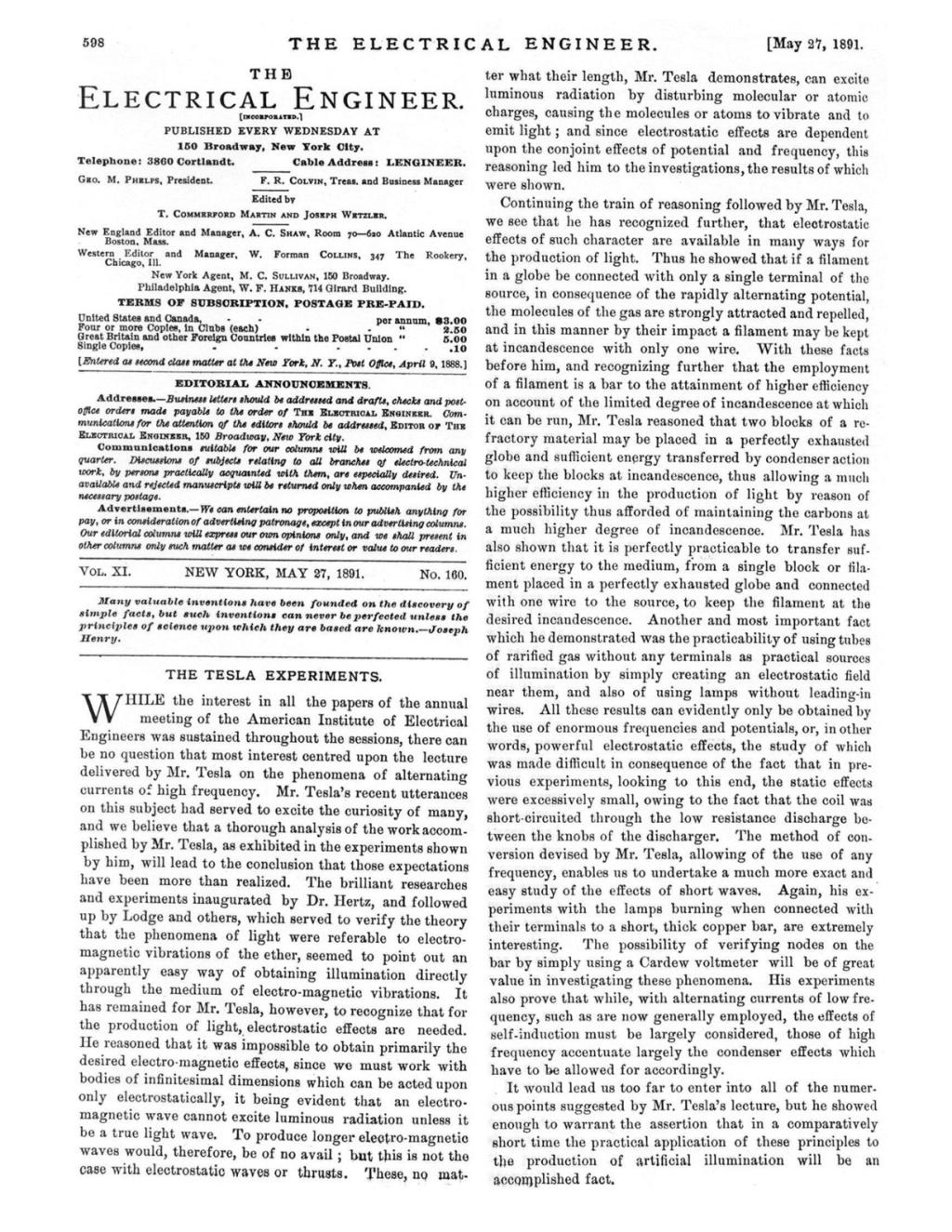