Dr. Tesla Writes of Various Phases of His Discovery.

To the Editor of The New York Times:
You have given considerable space to the subject of cosmic rays, which seems to have aroused general attention to an unusual degree. Inasmuch as I discovered this wonderful phenomenon and investigated it long before others began their researches your readers may perhaps be interested in my own findings.

The original idea was advanced and discussed by me in a series of articles on Röntgen rays and radioactivity, published from 1896 to 1898 in The Electrical Review. The results of my discoveries were reported all over the world through The Associated Press and found a powerful echo. But at that time scientific men were emphatically opposed to my theories, holding that the new actions were due to some kind of wave motion, while, according to my observations, they were produced by electrified particles of matter projected with great velocity. It was only years later that the views I then propounded were gradually accepted.

The experiments I undertook in 1896 were greatly facilitated through my invention of a novel form of vacuum tube suitable for operation by currents of many millions of volts and yielding effects of transcending intensities. This instrument has since been adopted by other investigators and most of the progress in several fields was achieved by its use.

When radioactivity was discovered, it was thought to be an entirely new manifestation of energy limited to a few substances. I obtained sufficient evidence to convince me that such actions were general and in nature the same as those exhibited by my tubes. In these, minute corpuscies, regarding which we are still in doubt, are shot from a highly electrified terminal against a target where they generate Röntgen or other rays by impact. Now, according to my theory, a radioactive body is simply a target which is continuously bombarded by infinitesimal bullets projected from all parts of the universe, and if this, then unknown, cosmic radiation could be wholly intercepted, radioactivity would cease.

I made some progress in solving the mystery until in 1899 I obtained mathematical and experimental proofs that the sun and other heavenly bodies similarly conditioned emit rays of great energy which consist of inconceivably small particles animated by velocities vastly exceeding that of light. So great is the penetrative power of these rays that they can traverse thousands of miles of solid matter with but slight diminution of velocity. In passing through space, which is all filled with cosmic dust, they generate a secondary radiation of constant intensity, day and night, and pouring upon the earth equally from all directions. As the primary rays projected from the suns and stars can pass through distances measured in light-years without great diminution of velocity, it follows that whether a secondary ray is generated near a sun or at any distance from it, however great, its intensity is the same. Consequently, if our sun, or any other, would be snuffed out of existence, it would have no appreciable effect on the secondary radiation. The latter is not very penetrative and is partly absorbed by the atmosphere. According to my determinations, its intensity beyond the atmosphere is about 50 per cent greater than at sea level. The whole atmosphere being equivalent to about 36 inches of lead, it is easy to determine the intensity of this radiation by making a measurement of the penetration at any known altitude. This theory is borne out strikingly in experiments with my vacuum tubes, but even if I did not have such proofs I would consider it plausible.

While the exploration of the upper regions of the atmosphere may yield many important results in other fields, I do not think that it will contribute considerably to our knowledge of the cosmic rays. In view of this, I believe that we will make much more rapid progress if those who are now taking interest in it will accept my theory and build further on this foundation, instead of embarking on useless errands in quest of mythical rays coming from nowhere. 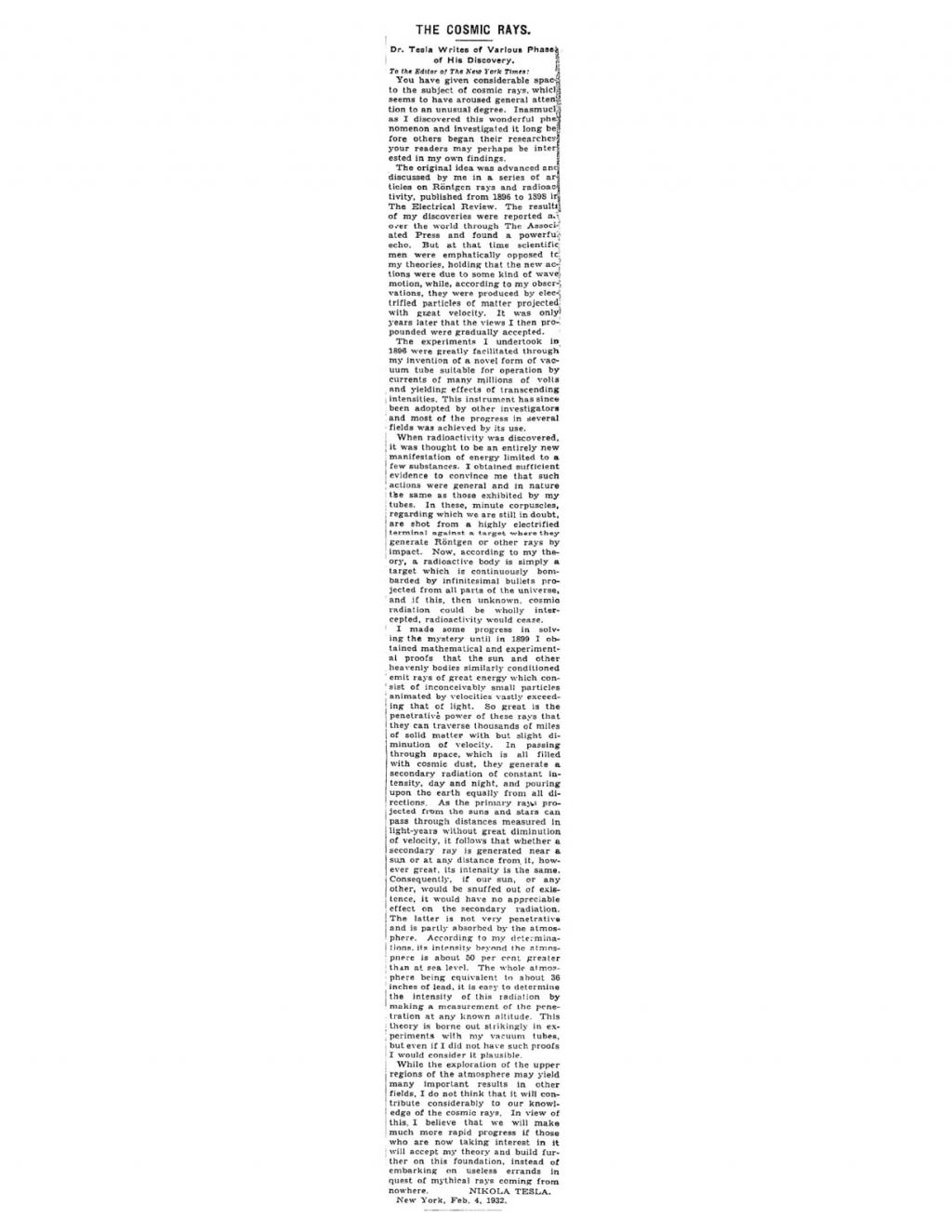