In The Electrical Engineer of August 12, I find some remarks of Prof. J. J. Thomson, which appeared originally in the London Electrician and which have a bearing upon some experiments described by me in your issue of July 1.

I did not, as Prof. J. J. Thomson seems to believe, misunderstand his position in regard to the cause of the phenomena considered, but I thought that in his experiments, as well as in my own, electrostatic effects were of great importance. It did not appear, from the meagre description of his experiments, that all possible precautions had been taken to exclude these effects. I did not doubt that luminosity could be excited in a closed tube when electrostatic action is completely excluded. In fact, at the outset, I myself looked for a purely electrodynamic effect and believed that I had obtained it. But many experiments performed at that time proved to me that the electrostatic effects were generally of far greater importance, and admitted of a more satisfactory explanation of most of the phenomena observed.

In using the term electrostatic I had reference rather to the nature of the action than to a stationary condition, which is the usual acceptance of the term. To express myself more clearly, I will suppose that near a closed exhausted tube be placed a small sphere charged to a very high potential. The sphere would act inductively upon the tube, and by distributing electricity over the same, would undoubtedly produce luminosity (if the potential be sufficiently high), until a permanent condition would be reached. Assuming the tube to be perfectly well insulated, there would be only one instantaneous flash during the act of distribution. This would be due to the electrostatic action simply.

But now, suppose the charged sphere to be moved at short intervals with great speed along the exhausted tube. The tube would now be permanently excited, as the moving sphere would cause a constant redistribution of electricity and collisions of the molecules of the rarefied gas. We would still have to deal with an electrostatic effect, and in addition an electrodynamic effect would be observed. But if it were found that, for instance, the effect produced depended more on the specific inductive capacity than on the magnetic permeability of the medium — which would certainly be the case for speeds incomparably lower than that of light — then I believe I would be justified in saying that the effect produced was more of an electrostatic nature. I do not mean to say, however, that any similar condition prevails in the case of the discharge of a Leyden jar through the primary, but I think that such an action would be desirable.

It is in the spirit of the above example that I used the terms “more of an electrostatic nature,” and have investigated the influence of bodies of high specific inductive capacity, and observed, for instance, the importance of the quality of glass of which the tube is made. I also endeavored to ascertain the influence of a medium of high permeability by using oxygen. It appeared from rough estimation that an oxygen tube when excited under similar conditions — that is, as far as could be determined — gives more light; but this, of course, may be due to many causes.

Without doubting in the least that, with the care and precautions taken by Prof. J. J. Thomson, the luminosity excited was due solely to electrodynamic action, I would say that in many experiments I have observed curious instances of the ineffectiveness of the screening, and I have also found that the electrification through the air is often of very great importance, and may, in some cases, determine the excitation of the tube.

In his original communication to the Electrician, Prof. J. J. Thomson refers to the fact that the luminosity in a tube near a wire through which a Leyden jar was discharged was noted by Hittorf. I think that the feeble luminous effect referred to has been noted by many experimenters, but in my experiments the effects were much more powerful than those usually noted. 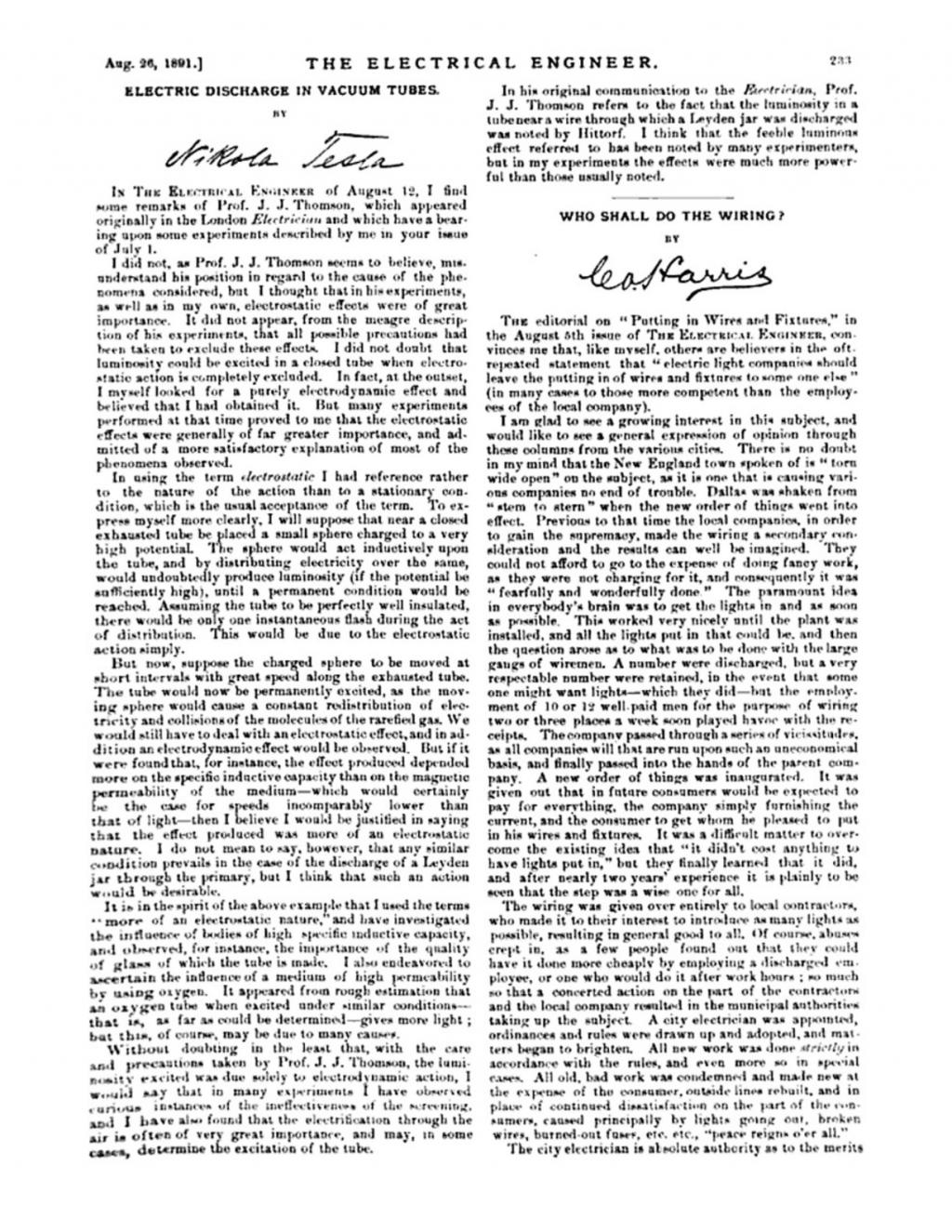