Experiments on the Electric Discharge in Vacuum Tubes

The beautiful and suggestive experiments on the electric discharge in vacuum tubes, shown by Prof. J. J. Thomson on the occasion of the visit of the Physical Society to Cambridge, in May, have excited considerable attention, and the illustrated account of them, which appeared in The Electrician of May 22nd, 1891, has been widely reproduced both in America and in France. In America the publication of Prof. Thomson’s experiments has resulted in some interesting contributions to the Electrical Engineer of New York, by Prof. Elihu Thomson and Mr. Nikola Tesla, who appear to have been pursuing the same fruitful line of research. The raison d’etre and the practical bearing of the phenomena described are not as yet apparent, but they seem to be of the order likely to yield valuable results both to the devotee of pure science and the patentee; indeed, Mr. Nikola Tesla has already brought the results of some of those striking experiments of his recently made public within the cognisance of the American Patent Office. However simple the future explanation, and however far-reaching the possible practical applications of these phenomena may be, they appeal at present mainly to the students of pure science, and to them the following notes by Prof. Elihu Thomson and Mr. Nikola Tesla will be of interest:—

“I have been much interested,” says Prof. Elihu Thomson, in the New York Electrical Engineer of June 24th, “in the account of novel phenomena given under the title ‘Some Experiments on the Electric Discharge in Vacuum Tubes,’ by Prof. J. J. Thomson, inasmuch as several months ago I tried the same, or a very similar, experiment. Briefly, my experiment was performed with a closed ring made of a glass tube about one inch in diameter, the external diameter of the ring being about six inches. This was exhausted and laid alongside of a single turn of heavily insulated wire, which formed part of the discharge path from the outside of a Leyden jar, arranged to be charged and discharged rapidly by a Toepler-Holtz machine. It was found that at every discharge of the jar there was a discharge in the tube giving a band of light in the vacuous space. The accompanying engraving (Fig. 1) shows the arrangement of apparatus as just described. Curiously enough, the experiment of Prof. J. J. Thomson, in which a small pellet of mercury in an exhausted tube stopped the discharge, had its counterpart in my own experiments, as follows: — I had constructed a two-way discharge tube (Fig. 2). One branch, a, was large in diameter, and the branch b was of barometer-tube section. Wires sealed at c, d enabled a discharge to be passed. A small globule of mercury was placed in the tube, and could be shaken down into the barometer tube and out into the large tube at will. Though the discharge would not always divide and pass through both tubes from c to d, it sometimes did; but the interposition of the mercury globule in the small tube stopped the discharge through it.

Mr. Nikola Tesla, writing to the same journal (Electrical Engineer of New York, July 1, 1891), says: — “I have noted the description of some experiments of Prof. J. J. Thomson, on the ‘Electric Discharge in Vacuum Tubes,’ and in your issue of June 24th, Prof. Elihu Thomson describes an experiment of the same kind. The following lines are not penned with any desire on my part to put myself on record as one who has performed similar experiments, but with a desire to assist other experimenters by pointing out certain peculiarities of the phenomena observed, which, to all appearances, have not been noted by Prof. J. J. Thomson, who, however, seems to have gone about systematically in his investigations, and who has been the first to make his results known. These peculiarities noted by me would seem to be at variance with the views of Prof. J. J. Thomson, and present the phenomena in a different light.

“My investigations occupied me principally during the winter and spring of the past year. During this time many different experiments were performed. Fig. 3 may serve as an example of one of the many forms of apparatus used. This consisted of a large glass tube, sealed at one end and projecting into an ordinary incandescent lamp bulb. The primary, usually consisting of a few turns of thick, well-insulated copper sheet, was inserted within the tube, the inside space of the bulb furnishing the secondary. This form of apparatus was arrived at after some experimenting, and was used principally with the view of enabling me to place a polished reflecting surface in the inside of the tube, and for this purpose the last turn of the primary was covered with a thin silver sheet.

“I have found that it is preferable to use in these experiments an alternate current machine, giving a moderate number of alternations per second, to excite the induction coil for charging the Leyden jar which discharges through the primary shown diagrammatically in Fig. 4, as in such case, before the disruptive discharge takes place, the tube or bulb is slightly excited and the formation of the luminous circle is decidedly facilitated. But I have also used a Wimshurst machine in some experiments.

“Prof. J. J. Thomson’s view of the phenomena under consideration seems to be that they are wholly due to electromagnetic action. I was, at one time, of the same opinion, but upon carefully investigating the subject I was led to the conviction that they are more of an electrostatic nature. In support of my view I will describe a few experiments made by me. To excite luminosity in the tube it is not absolutely necessary that the conductor should be closed. For instance, if an ordinary exhausted tube (preferably of large diameter) be surrounded by a spiral of thick copper wire serving as the primary, a feebly luminous spiral may be induced in the tube, roughly shown in Fig. 5. In one of these experiments a curious phenomenon was observed; namely, two intensely luminous circles, each of them close to a turn of the primary spiral, were formed inside of the tube, and I attributed this phenomenon to the existence of nodes on the primary. The circles were connected by a faint luminous spiral, parallel to the primary and in close proximity to it. To produce this effect I have found it necessary to strain the jar to the utmost. The turns of the spiral tend to close and form circles, but this, of course, would be expected, and does not necessarily indicate an electro-magnetic effect; whereas the fact that a glow can be produced along the primary in the form of an open spiral argues for an electrostatic effect.

“Another experiment performed is illustrated in Fig. 6. In this case an ordinary lamp-bulb was surrounded by one or two turns of thick copper wire, P, and a luminous circle, L, excited in the bulb by discharging the jar through the primary. The lamp-bulb was provided with a tinfoil coating on the side opposite to the primary, and each time the tinfoil coating was connected to the ground, or to a large object, the luminosity of the circle was considerably increased. This was evidently due to electrostatic action.

“In other experiments I have noted that when the primary touches the glass the luminous circle is easier produced and is more sharply defined; but I have not noted that, generally speaking, the circles induced were very sharply defined, as Prof. J. J. Thomson has observed; on the contrary, in my experiments, they were broad, and often the whole of the bulb or tube was illuminated; and in one case I have observed an intensely purplish glow, to which Prof. J. J. Thomson refers. But the circles were always in close proximity to the primary, and were considerably easier produced when the latter was very close to the glass.

“Another observation made by me was that when the specific inductive capacity of the medium between the primary and secondary is increased, the inductive effect is augmented. I have likewise noted that when a bulb is surrounded by a wire closed upon itself and in the plane of the primary, the formation of the luminous circle within the bulb is not prevented. But if, instead of the wire, a broad strip of tinfoil is glued upon the bulb, the formation of the luminous band was prevented.

“Some of the experiments of Prof. J. J. Thomson also would seem to show some electrostatic action. For instance, in the experiment with the bulb enclosed in a bell jar, I should think that when the latter is exhausted so far that the gas enclosed reaches the maximum conductivity, the formation of the circle in the bulb and jar is prevented because of the space surrounding the primary being highly conducting; when the jar is further exhausted the conductivity of the space around the primary diminishes, and the circles appear necessarily first in the bell jar as the rarefied gas is nearer to the primary. But were the inductive effect very powerful they would probably appear in the bulb also. If, however, the bell jar were exhausted to the highest degree they would very likely show themselves in the bulb only — that is, supposing the vacous space to be non-conducting. On the assumption that in these phenomena electrostatic actions are concerned we find it easily explicable why the introduction of mercury or the heating of the bulb prevents the formation of the luminous band or shortens the after-glow; and also why, in some cases, a platinum wire may prevent the excitation of the tube. Nevertheless some of the experiments of Prof. J. J. Thomson would seem to indicate an electro-magnetic effect. I may add that in one of my experiments in which a vacuum was produced in the Toricellian method, I was unable to produce the luminous band, but this may have been due to the weak exciting current employed.

“My principal argument is the following: I have experimentally proved that if the same discharge which is barely sufficient to excite a luminous band in the bulb when passed through the primary circuit be so directed as to exalt the electrostatic inductive effect an exhausted tube, devoid of electrodes, may be excited at a distance of several feet.” 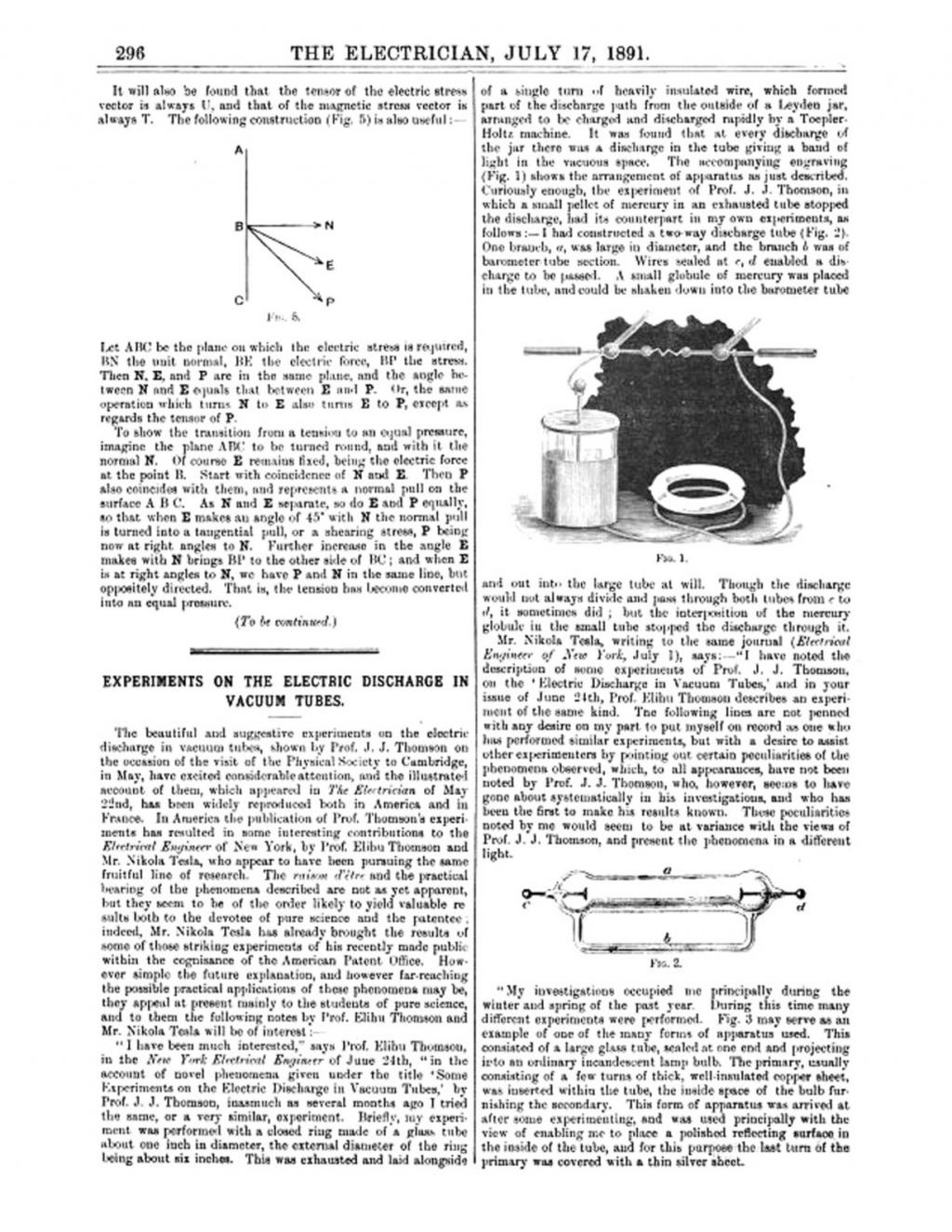