Nikola Tesla stalks through Mr. O'Neill's pages, the fantastic figure that he was in life - a celibate recluse who sought supreme control over matter and energy, a Dr. Faustus who cared nothing for Marguerites, a philosopher filled with a vast discontent, a poet who toyed with artificial lightning. Though he was not of this world he was something of a bon viveur in his younger days. No one could order a dinner with nicer discrimination, no one had a finer taste in rare vintages. French, English, German, Italian and his native Serbian - he not only spoke them all but quoted their poetry to all who would listen. He lived in hotel rooms most of his life, a hermit in a metropolis, whose tall, lean figure could be seen on Fifth Avenue, sunk in his thoughts, unaware of the salutations of those who knew him, stopping only to feed the pigeons around the Public Library.

To Edison must go credit for having first built central stations, inventing electric lamps and putting us on our electrical feet. Yet not much of Edison's apparatus is left. What we see about us is largely Tesla's. The man was a pioneer who could make a fortune and spend it all on lavish experimenting and who died owing J.P. Morgan, John Jacob Astor, Austin Corbin and others several millions. All were so many rabbits in the intellectual clutch of this fascinating boa constrictor. Newspaper reporters, though they could not understand what he was talking about, were enthralled with his proposals to communicate with Mars and to transmit power without wires over vast distances. Tesla knew how to get publicity, and he liked to pose as an electric sorcerer. He would discuss his projects with apparent reluctance and in the end, as if he were utterly wearied but only having exhausted the topic, would ask for another drink, talk on billiards or quote Goethe.

Like a medieval practitioner of black arts, Tesla was given to mystification. He was the first to speak of "death rays." Once he set up oscillations that shook buildings near his laboratory and brought the police from headquarters. What happened is not clear, for Tesla destroyed the apparatus. The tale reminds one of his contemporary, Keeley, who was largely responsible for the popularly accepted notion that a man playing a violin can shake down a skyscraper. It may be, too, that the generators of the Colorado Springs Electric Company blew out when Tesla on Pike's Peak electrified himself and glowed weirdly. Engineers will wonder why effects that brought disaster to a power house two miles away without benefit of wires did not kill Tesla, and they will doubt if discharges of high voltage but very little amperage could do so much harm. It is not that we question Tesla but that we want more evidence than he ever supplied that fan engineer can understand.

Here was a romanticist who should have been born in the Middle Ages. Electrical engineers never fully understood him. His mode of reasoning, his philosophic approach. were so much obscurantism to them. Even in the one popular article that he wrote over forty years ago for the old Century Magazine he was vague as an oriental mystic.

Soon after he came to this country Tesla was associated briefly with Edison. No greater contrast can be imagined: Edison, as practical as an Irish foreman of a railway section gang, who affected to despise theorists and mathematicians, though he did not hesitate to employ them; the Serbian, a dreamer to whom most inventions were mere toys, his own included. No wonder the two parted.

Though he lived to be 85, Tesla crowded most of his inventive activity within twenty years. And what activity it was! Polyphase current engineering, the induction motor, the use of oil in transformers, radio, electric arcs fed by direct current in a magnetic field, gas-discharge lamps which were forerunners of Broadway's neon lights, the medical application of high-frequency currents - the record speaks for itself.

As a practiced popularizer of science, Mr. O'Neill, who is the science editor of The New York Herald Tribune, vividly and skillfully tells the story of this extraordinary personality. His interest in his subject is more than that of the ordinary biographer. He wrote poems to Tesla as a boy, and when he made his acquaintance he sat enthralled at his feet. This biography has therefore much of O'Neill in it, which is one of its chief charms.

Because of this hero-worshiping attitude O'Neill gives Tesla far more than is his due. Tesla's great contribution to electrical engineering was his invention of alternating current machinery. Though O'Neill examines the claims of those who are regarded at least as independent inventors of this same machinery, especially the claims of Prof. Galileo Ferraris, he seems to this reviewer much too enthusiastic in Tesla's behalf. Nothing is said of S.Z. Ferranti, who in his way was just as remarkable as Tesla and who certainly built in London the first commercial alternating current station.

O'Neill believes so devoutly in Tesla that he regards him as the father of electrotherapeutics, though D'Arsonval deserves fully as much if not more credit for the use of high-frequency currents in medical practice. There is no doubt about Tesla's originality or about the grand way in which he thought and acted, but the phenomenon of simultaneous and independent invention is so well known that no physicist, however accomplished, ever stands alone.

Despite his extraordinary imagination, his profound knowledge of science and his rare gifts, Tesla remained a Victorian. When the atomic physicist gave us the electronic theory of matter and Einstein relativity Tesla would have none of them. He wanted his infinite universe, his Euclidean space, an ether which had become preposterous even when he was still in his prime. He died, lonely and misunderstood, leaving much of immense, practical importance but far more which is no clearer to us than the boasts of Paracelsus or the mystical forebodings of a Nostradamus.

O'Neill's book is the one full-length biography and the one appreciation at Tesla that we have. An immense amount of work has gone into its production. It does honor both to Tesla and its author, and it ought to be read by anyone who takes the slightest interest in this highly electrified world of ours. As for those novelists who still believe that a scientist is a wizard of the Merlin type, they will find O'Neill's Tesla made to order. 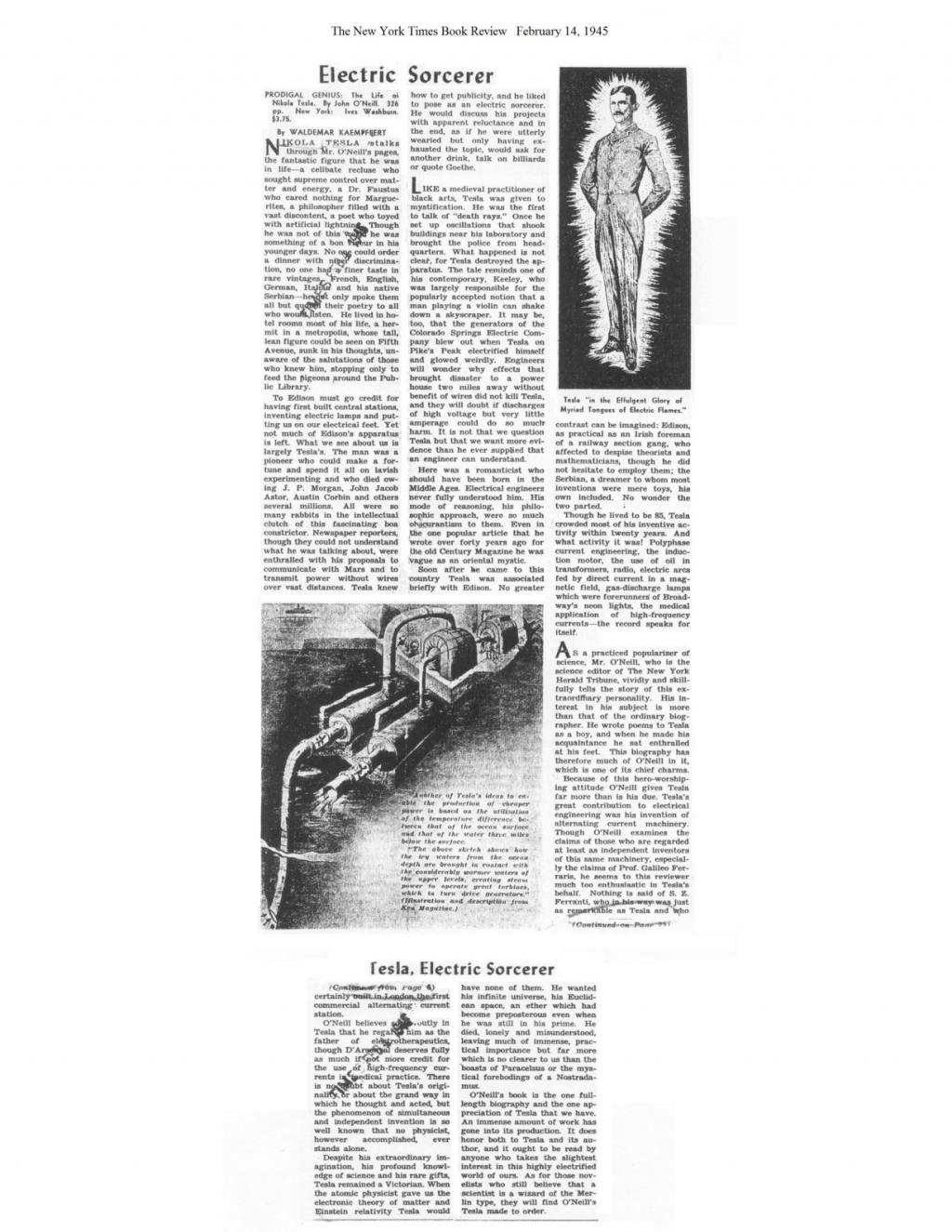