He Seeks to Patent Wireless Engine for Destroying Navies by Pulling a Lever.

“Impractical,” He Says of Westerner's Plan to Circle Country with Electric Fire.

Nikola Tesla, the inventor, winner of the 1915 Nobel Physics Prize, has filed patent applications on the essential parts of a machine the possibilities of which test a layman's imagination and promise a parallel of Thor's shooting thunderbolts from the sky to punish those who had angered the gods. Dr. Tesla insists there is nothing sensational about it, that it is but the fruition of many years of work and study. He is not yet ready to give the details of the engine which he says will render fruitless any military expedition against a country which possesses it. Suffice to say that the destructive invention will go through space with a speed of 300 miles a second, a manless airship without propelling engine or wings, sent by electricity to any desired point on the globe on its errand of destruction, if destruction its manipulator wishes to effect.

Ten miles or a thousand miles, it will be all the same to the machine, the inventor says. Straight to the point, on land or on sea, it will be able to go with precision, delivering a blow that will paralyze or kill, as is desired. A man in a tower on Long Island could shield New York against ships or army by working a lever, if the inventor's anticipations become realizations.

“It is not the time,” said Dr. Tesla yesterday, “to go into the details of this thing. It is founded on a principle that means great things in peace; it can be used for great things in war. But I repeat, this is no time to talk of such things.

“It is perfectly practicable to transmit electrical energy without wires and produce destructive effects at a distance. I have already constructed a wireless transmitter which makes this possible, and have described it in my technical publications, among which I may refer to my patent 1,119,732 recently granted. With transmitters of this kind we are enabled to project electrical energy in any amount to any distance and apply it for innumerable purposes, both in peace and war. Through the universal adoption of this system, ideal conditions for the maintenance of law and order will be realized, for then the energy necessary to the enforcement of right and justice will be normally productive, yet potential, and in any moment available, for attack and defense. The power transmitted need not be necessarily destructive, for, if existence is made to depend upon it, its withdrawal or supply will bring about the same results as those now accomplished by force of arms.

“But when unavoidable, the same agent may be used to destroy property and life. The art is already so far developed that great destructive effects can be produced at any point on the globe, determined beforehand and with great accuracy. In view of this I have not thought it hazardous to predict a few years ago that the wars of the future will not be waged with explosives but with electrical means.”

Dr. Tesla then said that it would be possible with his wireless mechanism to direct an ordinary aeroplane, manless, to any point over a ship or an army, and to discharge explosives of great strength from the base of operations.

Asked to express an opinion upon the announcement last Sunday of Charles H. Harris, an electrical engineer of Los Angeles, that he would be able to surround this country with an electrical wall of fire in time of war, Dr. Tesla gave it as his opinion that Mr. Harris was not practical.

“It is hard to stamp as impossible such results as those described in the press dispatches to which you refer. Granted, however, that the project is feasible, it would take more than all the motive power obtainable in the United States to throw a wall of fire around the country. In fact, even the passage of small currents at considerable distances through air consumes a great deal of energy on account of the immense pressure required. So, for instance, in lightning discharges, energy may be delivered at the rate of billions of horsepower, though the currents are of smaller volume than those developed by electrical generators in our power houses.” 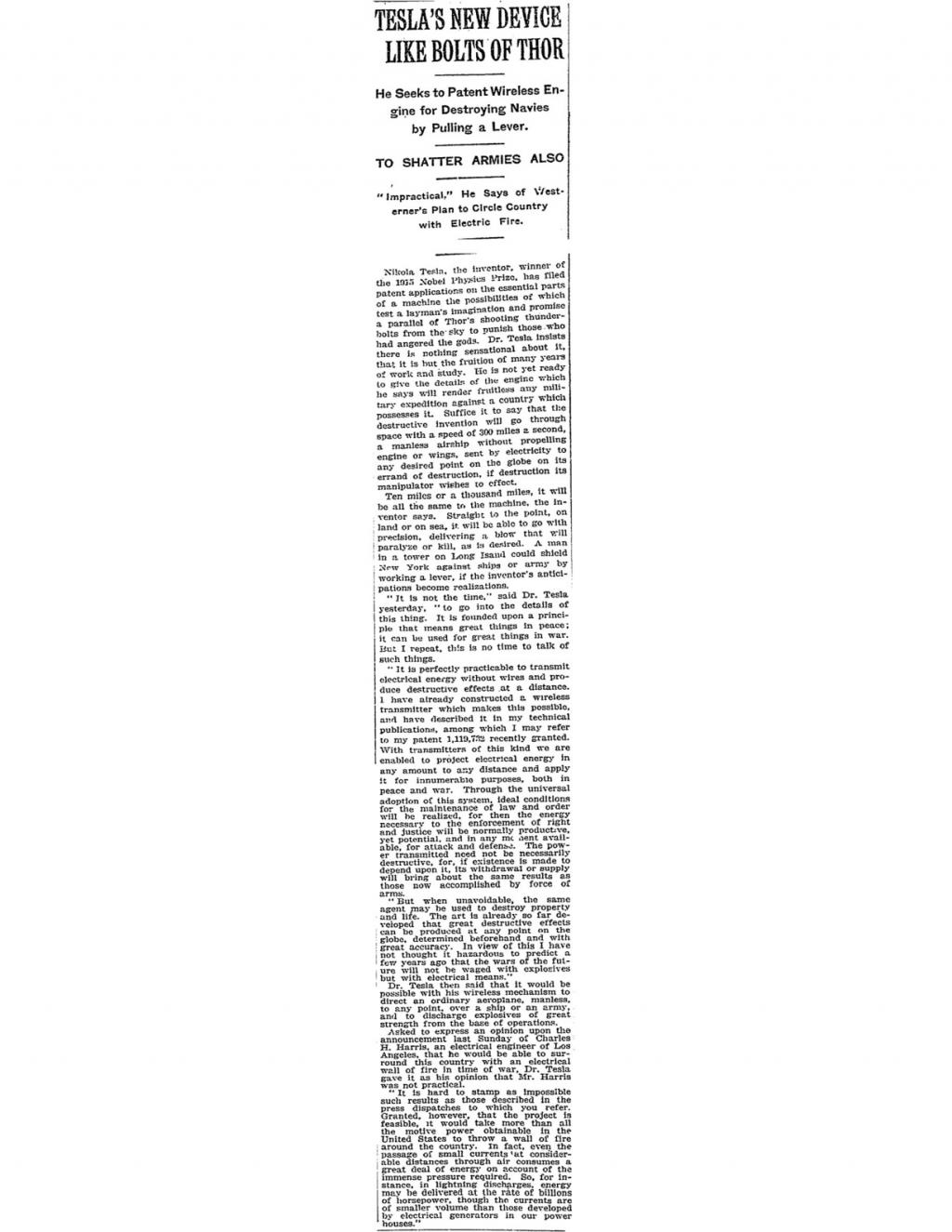