A Joint Use of Patents

Agreement Between General Electric and Westinghouse

The long fight between the General Electric Company and the Westinghouse Electric and Manufacturing Company has been ended. Millions have been spent by the two companies in lawsuits against each other over patents, and millions more have been sacrificed in contests to secure contracts for supplying electrical materials. These are the foremost companies in America engaged in the manufacture of electrical apparatus, including lighting plants and railroad equipment.

The Boards of Directors of both companies met yesterday to decide upon terms for the settlement of their differences. At the close of the meetings the following was issued as a joint statement by the companies:

Negotiations between the General Electric Company and the Westinghouse Electric and Manufacturing Company have resulted in an arrangement with respect to a joint use of the patents of the two companies, subject to existing licenses, on terms which are considered mutually advantageous.

It has been agreed that after certain exclusions the General Electric Company has contributed 62½ per cent and the Westinghouse Electric and Manufacturing Company 37½ per cent in value of the combined patents, and each company is licensed to use the patents of the other company, except as to the matters excluded, each paying a royalty for any use of the combined patents in excess of the value of its contribution to the patents.

The patents are to be managed by a Board of Control, consisting of five members, two appointed by each company, and a fifth selected by the four so appointed. Both companies have acquired during their existence a large number of valuable patents and numerous suits have been instituted in consequence of the infringement of these patents by one party or the other, or by their customers. In the prosecution of these suits large sums of money have been expended, and the general expenses of the companies have in this manner been greatly increased. It is expected that the economies to be effected will be very considerable, and that the two companies and their customers will be mutually protected.

The especial incentives which led to the arrangement at this time were the recent decisions in favor of patents of the General Electric Company controlling the overhead system of electric railways, the approaching trials on a number of other important General Electric patents on controllers and details of electric railway apparatus and systems, and other electrical devices, and the equally strong position of the Westinghouse Company in respect to power transmission, covered by the patents of Nikola Tesla, and in view of its other patents in active litigation, some of which are of controlling importance.

President Charles A. Coffin, of the General Electric Company, said: “Although the statement which has been given out does not happen to say so in so many words, the arrangement between the two companies has been formally approved by the directors of both companies. The agreement is as yet in skeleton form. It will take several weeks to complete it. I should say it might, perhaps, be perfected and put into effect by June 1. It is the intention that it shall continue during the life of the patents of the companies. The patents which are excluded are foreign patents, which cannot be embraced, and patents on cable and underground railway materials, which are covered by licenses.

“The companies will stop fighting each other in the courts, and will join in prosecuting infringements of their patents. How much will be saved by the termination of litigation I cannot say, as all legal expenses are included in one account. It would be necessary to separate the items to furnish actual figures. The saving, however, will be large.

“No monopoly of the electrical business will be created by the agreement. There are other important concerns in the business. The General Electric and Westinghouse companies do not consolidate. They retain their entire independence, and will, in fact, as heretofore, be competitors in business. Prices will doubtless be agreed upon which will benefit customers of the companies and the companies themselves, but there is no intention of establishing high prices for electrical apparatus and supplies. It has not yet been figured out how much the revenues of the companies will be increased by the arrangement, nor can it be until the arrangement has been put in more perfect form.

“The first proposition for an agreement between the companies was made some five years ago, but the negotiations which resulted in the agreement were opened recently.”

Opposition to the President

The transactions in the stock of the General Electric Company on the Stock Exchange yesterday aggregated over 37,000 shares. The common stock opened at 37¾, against 37½, the closing price on Wednesday. It advanced to 38½ and then receded to 37 3/8 at the close, so that there was a net loss of one-eighth of 1 per cent for the day. A few years ago the stock sold at 120. There were no dealings in Westinghouse, but 31 was bid for the common and 52 asked for the preferred.

The authorized capital] stock of the General Electric Company ss $50,000,000, of which $10,000.000 may be preferred. The amount of common stock outstanding is $30.460.000 and of the preferred stock $4,252,000. Prior to August, 1803, dividends at the rate of 8 per cent a year were paid on the common stock, but no dividends have been paid since that date. The preferred is entitled to dividends at the rate of 7 per cent a year, and these are cumulative, so that when unpaid they become a lien on earnings. The dividends on the preferred stopped with the one due January, 1894. The company has issued $8,750,000 of 5 per cent debenture bonds, which are convertible into stock on the basis of $100 in stock for $120 in bonds.

The surplus reported by the company for the year ended January 31, 1895, after charging off $932,521 for old losses, depreciation, etc., was $414,643. The annual meeting takes place May 12. The company’s principal works are at Schenectady, N. Y. It has other works at Harrison, N. J., and at Lynn, Mass. The company was organized in April 15, 1892, and acquired all of the capital stocks of the Edison Electric Light, Edison General Electric, Thomson-Houston Electric and Thomson-Houston International Electric companies. It controlled all the Edison patents for electric lighting. 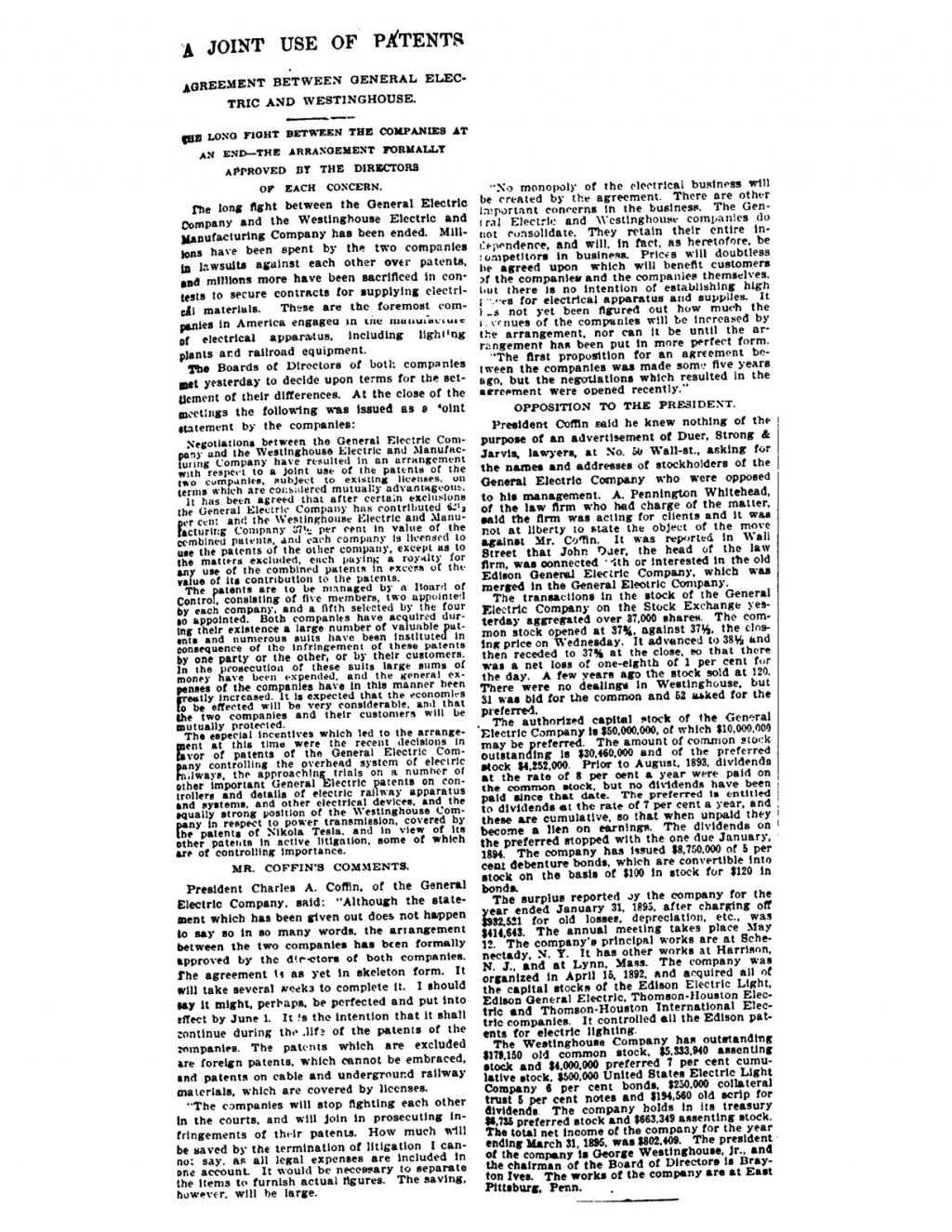