His Interesting Experiments - An Account of Them by Himself

“The Electrical Review” publishes to-day a communication from Nikola Tesla, describing for the first time his interesting experiments in radiography. The scientific world has been eagerly awaiting an expression of opinion from Mr. Tesla, who is known to have begun his experiments within half an hour after the news of Professor Röntgen’s discovery was cabled to this country. In connection with Mr. Tesla’s communication, “The Electrical Review” prints two remarkable radiographs. One of these shows the right shoulder of a man taken through his clothing, a plate of glass three-sixteenths of an inch thick and two inches of wood. This radiograph, which was made at the distance of four feet from the source of the X rays, shows the ribs, shoulder bones and bones of the upper arm. The other radiograph shows a copper wire bent to form the word “Röntgen,” and was made at a distance of eleven feet from the wooden slide covering the sensitized plate.

A Stream of Material Particles

Mr. Tesla says that the rarefaction of the Crookes tubes used in these experiments may be increased by electrical means to any degree desirable, far beyond that obtainable by mechanical appliances. This method he describes. In regard to the nature of X rays, he says: “I am getting more and more convinced that we have to deal with a stream of material particles, which strike the sensitive plate with great velocity. Taking as a basis the estimates of Lord Kelvin on the speed of projected particles in a Crookes bulb, we arrive easily by the employment of very high potentials to speed of as much as 100 kilometres a second. Now, again, the old question arises: ‘Are the particles from the electrode or from the charged surface generally, including the case of an external electrode, projected through the glass or aluminum walls, or do they merely hit the inner surface and cause particles from the outside of the wall to fly off, acting in a purely mechanical way, as when a row of ivory balls is struck?’ So far, most of the phenomena indicate that they are projected through the wall of the bulb, of whatever material it may be, and I am seeking for still more conclusive evidence in this direction..... It is now demonstrated beyond any doubt that small metallic objects or bony or chalky deposits can be infallibly detected in any part of the body.”

Radiographs of Birds and Rabbits

The writer has also secured radiographs showing the bony structure of birds and rabbits, even to the hollow of the bones. He has obtained a radiograph of a rabbit after an hour’s exposure, in which not only every detail of the skeleton is visible, but a clear outline of the abdominal cavity, the location of the lungs and the fur are shown. Radiographs of large birds show the feathers distinctly. In another instance an exposure of forty minutes gave a radiograph of the human skull, showing clearly not only the outline, but the cavities of the eye, chin, cheek, nasal bones, the lower jaw and connections to the skull, the flesh and even the hair.

Effects of Radiation on the Head

Mr. Tesla closes his communication in the following words: “By exposing the head to a powerful radiation strange effects have been noted. For instance, I find that there is a tendency to sleep, and the time seems to pass away quickly. There is a general soothing effect, and I have felt a sensation of warmth in the upper part of the head. An assistant independently confirmed the tendency to sleep, and a quick laps of time. Should these remarkable effects be verified by men with keener sense of observation, I shall still more firmly believe in the existence of material streams penetrating the skull. Thus, it may be possible by these strange appliances to project a suitable chemical into any part of the body.

“Röntgen advanced modestly his results, warning against too much hope. Fortunately, his apprehensions were groundless, for, although we have to all appearance to deal with mere shadow projections, the possibilities of the application of his discovery are vast. I am happy to have contributed to the development of the great art he has created.” 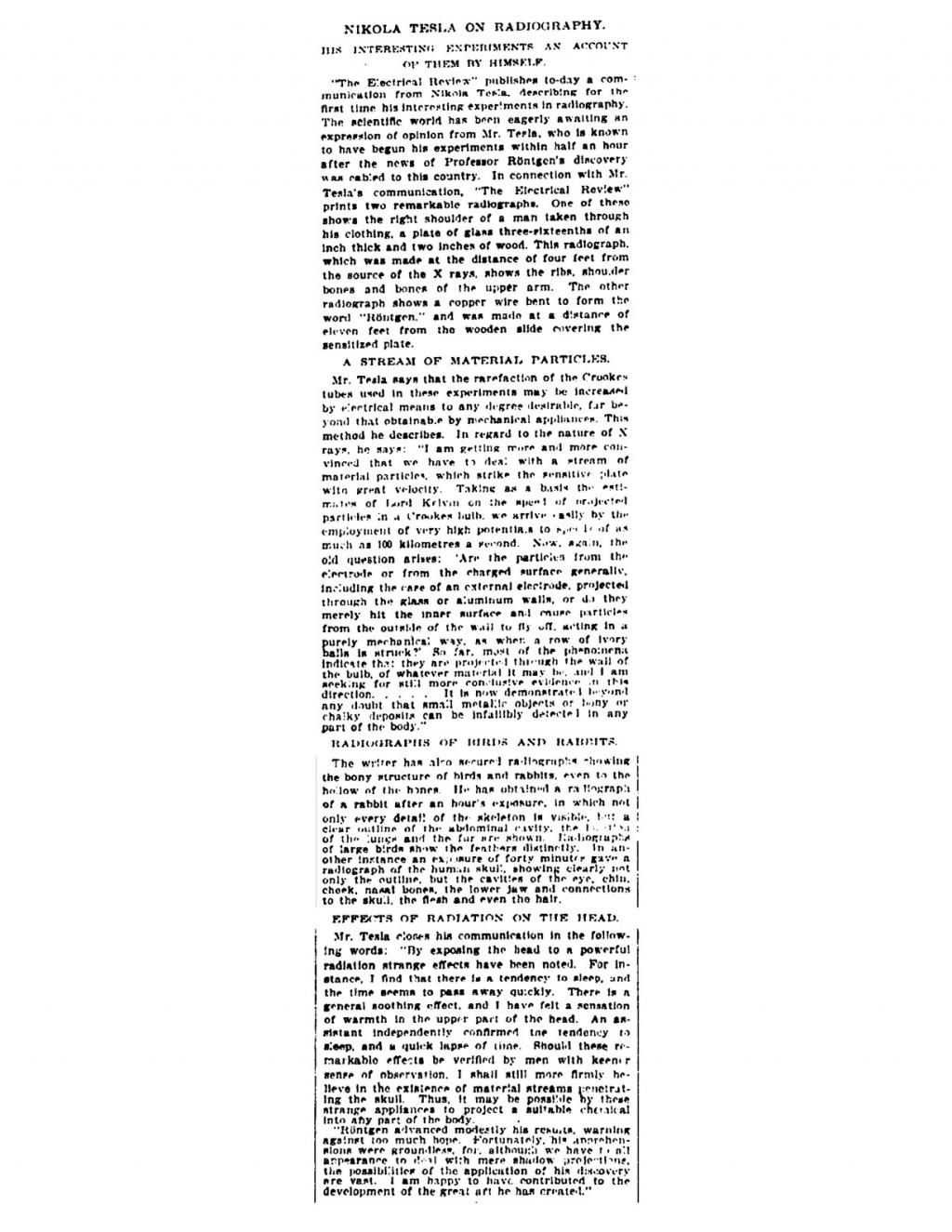