Mr. Tesla Before The London Institution of Electical Engineers and The Royal Institution

(Special Cablegram to The Electrical Engineer.)

On the evening of February 3, Mr. Nikola Tesla, by special invitation, delivered a lecture on the results of his latest investigations before the London Institution of Electrical Engineers.

After a short introductory as to the theory which led him up to his new line of work, involving the application of enormously high potentials and frequencies far exceeding those heretofore employed, Mr. Tesla began his experimental demonstrations with the exhibition of various forms of discharges. He showed first an induction coil operated by condenser discharge. With this coil he produced various remarkable discharge phenomena. Among others he imitated the spark of a Holtz machine and showed a brush discharge covering an area of something like 4 or 5 square feet, and also a luminous wire outlining the name of William Thomson. Mr. Tesla then took up some very novel and exceedingly interesting phenomena discovered by him some time ago consisting of a brush rotating in an exhausted globe. He showed that the brush was affected electrostatically, magnetically (even by the earth’s magnetism), and that the study of these phenomena might lead to important discoveries as to the nature of electrostatic or electromagnetic fields.

Mr. Tesla showed how Crookes’ well-known radiometer is set in motion at ordinary atmospheric pressures with alternating high potentials, thus affording another link in the chain of evidence which is gradually establishing the truth of modern views.

The subject of obtaining motive power was next taken up by Mr. Tesla, who exhibited a motor running on one wire and also without any connection with the generator, and the lecturer also dwelt on the possibility of running motors without wires.

Mr. Tesla next spoke of the construction of light-giving bulbs and the manner in which the dissipation of the energy supplied is prevented in the bulb by screening and allowing it to be dissipated only from the point at which it is wanted. In this connection he brought before his audience the results obtained with “carborundum,” the new diamond-like substance recently produced by Mr. E.G. Acheson, of Monongahela, Pa.

Mr. Tesla also dwelt on phosphorescence and concluded his address with a demonstration of the luminous effects produced upon tubes in an electrostatic field.

On the following evening Mr. Tesla repeated his lecture before the Royal Institution by invitation.

Some idea of the interest aroused by Mr. Tesla’s lecture may be formed from the fact that the London Times went to the unusual length of devoting a column editorial to it and publishing a very full report of it, with a description of his more striking demonstrations. 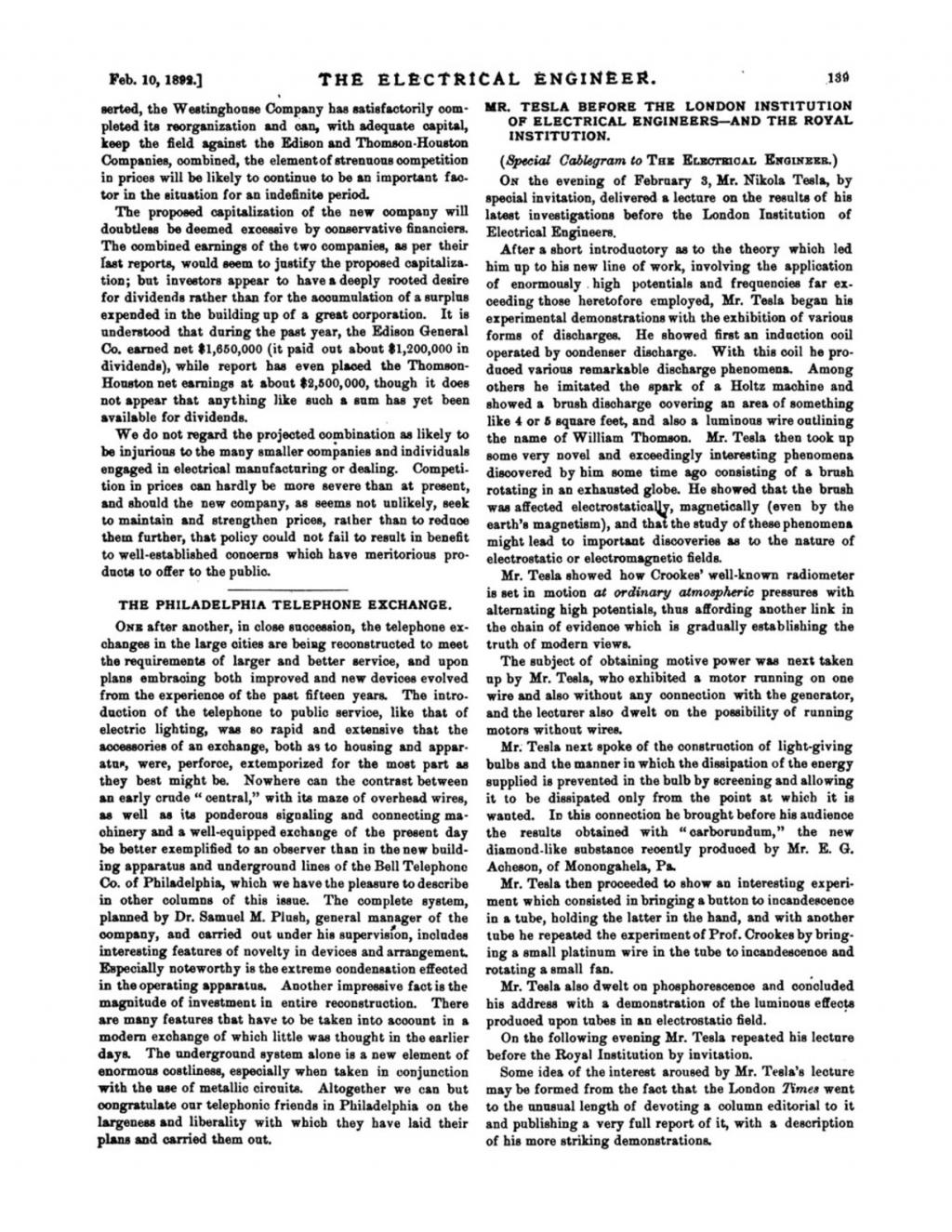