Manufacturer and Builder, The
Page number(s):
145

Nikola Tesla was born in Smiljan, a town of Croatia, Austria-Hungary, in 1857. He received his early education at Carlstadt in Croatia, and as he developed, even in his boyhood, a fondness for mechanics, he was sent to the polytechnic school in Gratz, Austria, to study civil engineering. Like many young men in Europe his educational training was very thorough, and he calculates that about eighteen years of his life were spent in schools. His father was an able clergyman attached to the Greek Oriental Church, and besides being celebrated for his oratory was a writer of note, a linguist and a mathematician. His uncle also was similarly gifted. He was a professor in a military academy in Austria, and the author of standard works on mathematics. While his younger brother followed in the footsteps of his father and entered the Greek Church, where he has the rank of cardinal and is a famous orator, Tesla’s career was influenced by his mother. In her little native town she was looked upon as a wonderful women. Her inventive taste was inherited from her father, an inventor and constructor of machinery, who was regarded as a very ingenious man. At an early age Tesla had his inventive faculty developed by the influence of his mother in identically the same way as Hiram Maxim had, for Mrs. Tesla constructed nearly all the utensils she needed in her household, and that too without any of the aid that patterns would have given her. She was especially expert in weaving and used to plant the hemp and flax, get out the fiber, spin thread and improvise whatever mechanical appliances were necessary for producing enough cloth of all kinds for the use of her large family.

In the course of his studies young Tesla saw many electrical experiments performed and soon was drawn away from the study of engineering proper to that of the powers and uses of the electric current. However, he obtained his diploma as an engineer in 1887 and engaged in the telegraph service of Buda-Pesth, where he constructed several dynamo machines. He thought that America offered a better field for his ambition and came here in 1887, at once securing remunerative employment with the Westinghouse Company. He left them to pursue a series of experiments in producing light without heat.

Previous to Tesla’s investigations all the work along this line had been done by the use of the continuous current, but while he was perfecting a generator of alternating currents the idea came to him that here was the mode of the electric force that would enable him to produce a new form of electric light with the element of heat eliminated. Now every school-boy has learned that light is produced by vibrations in the ether surrounding us and the more rapid the vibrations the brighter the light. If by means of the alternating current Tesla could cause vibrations rapid enough, would he not be able to produce light and that too without heat? In his first experiments in this direction he used an alternator with 384 poles in its circle, thus giving 9,600 alternations per second. He soon found, however, that better results could be obtained by using the ordinary alternator which contains but a dozen poles, and increasing the number of alternations per second by the use of a condenser and converter which he has improved and adapted to his use. This last consists of an ordinary transformer such as is used in electric lighting and a second transformer which contains in its circuit a magnetic spark interrupter. He thus obtains discharges with very great frequency. He connects this circuit with a condenser, consisting of a series of Leyden jars, and thus produces a surprising effect. By this method he obtains between one and two million vibrations per second and has hightened the pressure in as great a degree as he has increased the number of vibrations. The experiments by which his predecessors had achieved some success had consisted in applying the electrodes to the inside or outside of glass tubes, from which the air had been exhausted, and so securing a bright light without heat. Tesla took one step in advance when by the greater power of his instrument he was able to produce as great a light as that of Geissler or Crookes while having his electrodes several feet from the tubes. But this did not satisfy him. It was not enough for him to be able to light a room by the use of globes similar to those which shield and temper the ordinary electric light. His seemingly preposterous idea was to suffuse a room with artificial light even as the sun does with its rays of natural light, only his artificial light was to be without that heat which often renders the sun’s rays uncomfortable. During the course of many experiments he found that it was possible to produce light when the tubes were filled with air, and at length he was able to get the same effect of a soft bright light without the aid of the tubes. He merely suspends two metallic plates from opposite walls of a room and attaches the poles of his improved condenser to these plates. This was the real solution of the problem he had set himself to solve, but many further experiments were necessary in order to perfect his work in detail. In the course of these later experiments he has found himself able to produce light of different colors by exposing different substances to the action of the current. His aim now is to get a light as bright as that produced by the use of bulbs.

Tesla’s discovery of the possibility of increasing the vibrations of the electric current until they equal those of light is destined to be of service to electricians and through them to the rest of mankind in many ways. It will lessen the time required to send a message by cable and so increase the cable’s carrying capacity. It may be of use in transmitting danger signals to vessels, even at some distance from shore. At the recent meeting of the Laryngological section of the Academy of Medicine in New York when Dr. Wendell C. Phillips exhibited an electrical head illuminator, by means of which every vein, line, or imperfection in the skin and gums of the subject were brought out with startling vividness, it was found that the only drawback to the wonderful instrument was that the lamp became too hot to be held in the mouth for any length of time. With the perfection of Tesla’s idea this would be remedied and one of the most valuable aids to medical science would be in a finished state. 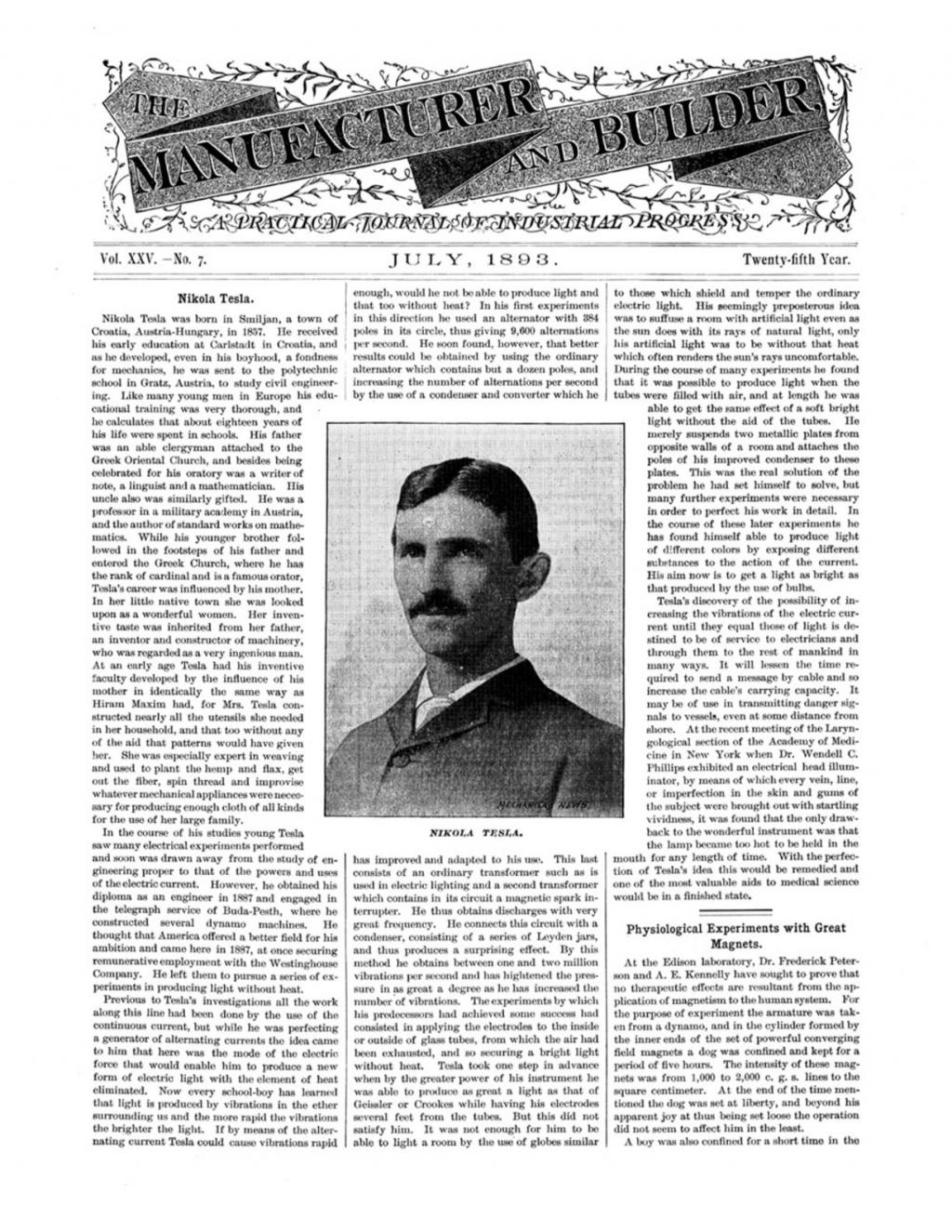