In the last issue of The Electrical World I find an article on my “Drehstrom” patent which appeared originally in Industries, and is, I believe, from the pen of the able editor of that journal. Some of the statements made are such as to cause an erroneous opinion to gain ground, which I deem it my duty to prevent — a disagreeable one I may say, as I do not like to express my opinion on a patent, especially if it is my own.

It may be, as the writer states, that the theory of the action of my motor advanced in my paper before the American Institute in May, 1888, is a clumsy one, but this theory was formed by me a number of years before the practical results were announced, the patents being applied for only after it was undoubtedly demonstrated that the motor could fairly compete in efficiency with the direct current motor, and that the invention was one of commercial value. These patents were taken out with the help of some of the ablest attorneys in the United States, well versed in electrical matters; the specifications were drawn up with great care, in view of the importance of the invention, and with proper regard to the state of the art at that period, and had the patents been carefully studied by others there would not have been various features of my system reinvented, and several inventors would have been spared at this late date a keen disappointment.

The writer apprehends that it might be difficult for a nontechnical judge to decide whether a motor with two or more separate fields and armatures, coupled together mechanically, does or does not fall under my patent. I do not share his apprehension. Judges are highly educated men, and it does not require much technical knowledge to convince one that it is the same whether two belts driving a rigid arbor are close together or far apart. Nor do I think that it is necessary for the honorable judge to be a partisan of the armature reaction theory in order to recognize the identity of the two arrangements referred to by the writer of the article in question. Indeed, I would seriously doubt the sincerity of a man capable of clear conceptions were he to uphold that the arrangements are essentially different, even if the case should stand exactly as he assumes by way of illustration of “puzzles likely to arise.” For where is there a difference? Take, for instance, a form of my two-phase motor. There are two sets of field magnets, one at the neutral parts of the other. One of the sets, therefore, might as well be removed and placed a distance sideways, but long experience shows that in output, efficiency, cost of construction and in general mechanical respects such an arrangement is inferior. The two sets are connected inductively through the armature body or the windings thereon. Part of the period one set of field magnets acts as a generator, setting up induction currents, which circulate in the field of force of the other set, which may be looked upon as a motor. Part of the period again, the second set becomes the generator and the first the motor, the action being at the same time such that the generated currents are always passed in a definite direction with respect to the field; they are commutated as it were, and a tendency to rotate in a given direction is imparted to the armature. Now place two fields side by side and connect properly the armature windings. Are not the fields again inductively connected? Do not the currents set up by one field cause currents to circulate in the other, and is the action not exactly the same in both cases? This is a fact, no matter what theory is adhered to. The writer says that in the case of two separate structures there is really nothing which may be called rotation of the field. But is there any such thing, when the two structures are merged in one? Is it not in accordance with accepted notions to conceive the imaginary lines as surging simply in the pole projections in exactly the same manner in both the arrangements?

Irrespective of the view taken, be it even the more unfair to the inventor, no one is permitted to go as far as to make him responsible, in such a case, for theories and interpretations of his invention. Theories may come and go, but the motor works, a practical result is achieved and the art is advanced through his pains and efforts. But what I desire to point out principally is that in the article above referred to the writer is only assuming a case which cannot occur. He is evidently judging the state of things from my short paper before the American Institute. This paper was written in a hurry, in fact only shortly before the meeting of the Institute, and I was unable to do full justice even to those features upon which, as employee of a company owning the invention, I was permitted to dwell. Allow me to observe that my patent specification was written up more carefully than my paper and the view taken in it is a broader and truer one. While the “clumsy” theory was adapted as the best in explanation of the action of the motor, the invention is not represented as dependent entirely on that theory; and in showing a three phase motor with six projections, where it was manifestly more consistent with the accepted popular ideas to assume the “lines of force” as simply surging in the projecting pole pieces, this view was distinctly and advisedly taken, as the following quotation from my foundation patent will show: “The variations in the strength and intensity of the currents transmitted through these circuits (lines and armature) and traversing the coils of the motor produce a steadily progressive shifting of the resultant attractive force exerted by the poles upon the armature and consequently keep the armature rapidly rotating.” There is, in this instance, no question of a rotating field in the common acceptance of the term of the resultant attractive force; there is a question simply of a diagram of force, and it is immaterial for the operation whether the fields are close together or far apart, or even whether, or not, they are inductively connected.

I do not think that in Germany, where the Patent Office is proverbially strict in upholding the rights of the inventor, an illegitimate and unfair appropriation of the invention by others will be tolerated by the courts. 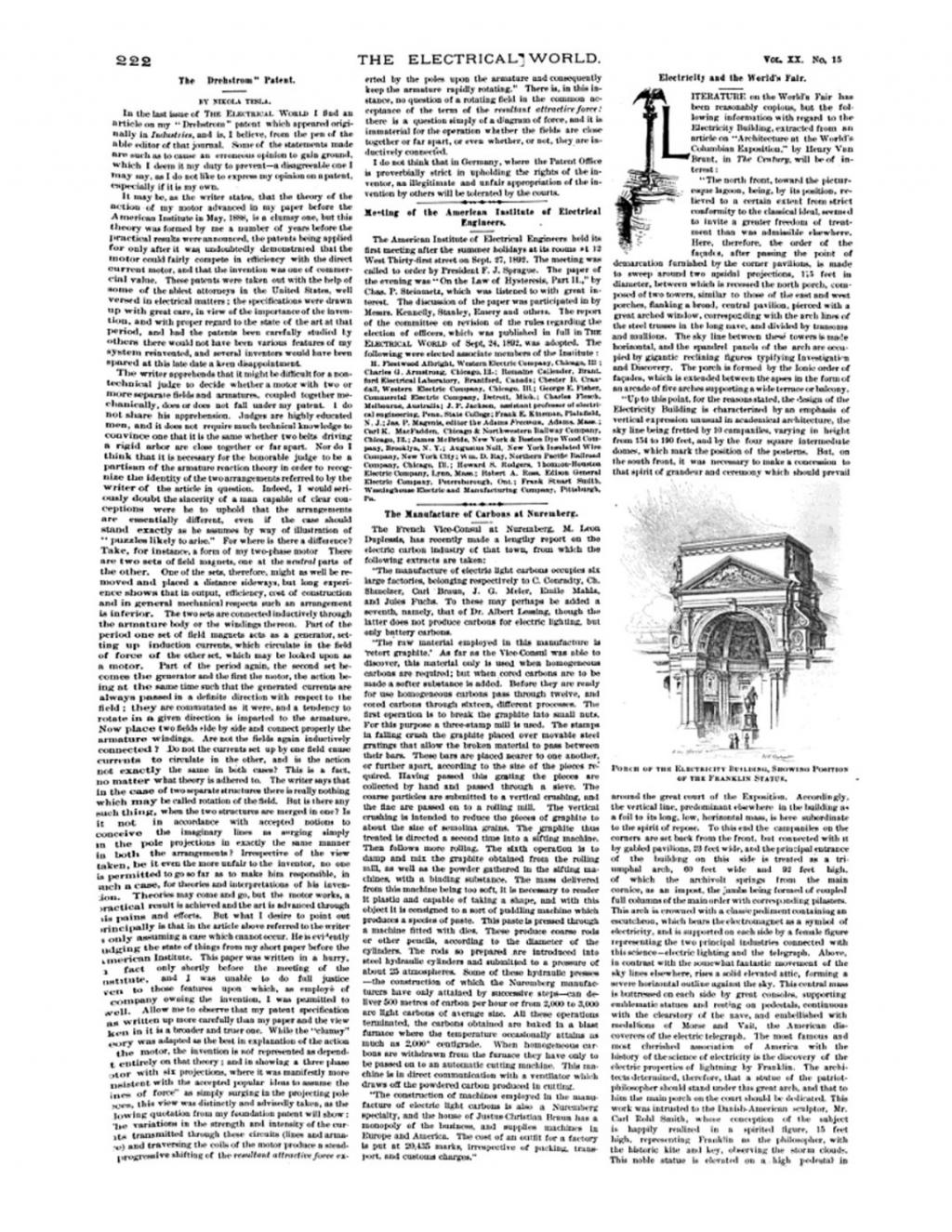