The award of the Edison medal to Nikola Tesla is most appropriate, in view of the early contribution that he made to alternating-current motors. In order to recognize that contribution, one must go back to the period, thirty years ago, when alternating-current engineering was greatly handicapped by the absence of motors capable of being installed on alternating-current circuits. Direct-current motors were well advanced, and there were many of them, particularly in America; but, except for synchronous single-phase motors and a few small series motors, the alternating-current motor was unknown. The synchronous motor was impracticable, because it had to be started and brought up to speed. Alternating current was used only for lighting. In the rivalry which then existed between the direct-current and alternating-current systems the former could claim to deliver both light and power, while the latter could deliver only light, although, with the aid of the transformer, if could do so at a relatively great economical distance.

It was at this point that Tesla invented the polyphase alternating-current system and polyphase motors, which, whether of the synchronous or of the asynchronous type, had the advantage of a definite starting torque. It is generally understood that he was not the only inventor of the polyphase motor. The same idea seems to have occurred to one or two other independent inventors in Europe. But not only was Tesla the sole American independent inventor of the polyphase motor, but he was also the only inventor of it in the whole world who had faith in it. He believed in it enthusiastically and urged its claims both publicly and privately. He built the first small polyphase motor, which behaved very satisfactorily, and he urged the building of larger ones. Much experimenting, designing and discarding had to be done before large polyphase motors could be built successfully, and the progress was slow; but Tesla’s faith was unshakable and his claims were prophetic. A less enthusiastic nature might have quailed before the discouragements and have allowed success to escape.

The polyphase motor was not Tesla’s only pioneer contribution to electrical progress. He was a tireless experimenter, and his experiments carried him very early into the field of high-frequency phenomena. He worked first with high-frequency alternators, or alternators which, in 1890, were considered to give a high frequency. Later he developed the well-known Tesla induction coil, or high-frequency oscillator. With this new source he was able to demonstrate, during 1891 and 1892, in England, France and America, a number of entirely new electrical phenomena which at lower frequencies had previously been unobtainable. His lectures were given at the Royal Institution in London, the Franklin Institute in Philadelphia, and in various other places. The experimental phenomena he produced were dazzling and classical. They deservedly brought him great renown.

The high-frequency phenomena which Tesla first developed and displayed had scientific rather than practical interest; but Tesla called attention to the fact that by taking his electric oscillator, grounding one side of it and connecting the other to an insulated body of large surface, it should be possible to transmit electric oscillations to a great distance, and to communicate intelligence in this way to other oscillators in sympathetic resonance therewith. This was going far toward the invention of radio-telegraphy as we know it to-day.

For the above reasons we welcome and acclaim the award to Nikola Tesla which the American Institute of Electrical Engineers has made of its Edison medal. We of this generation are prone to forget the great efforts and the unwearying patience which have been necessary in the past to produce those results which are now the every-day electrical commonplaces of life, and it is well to signalize them, lest the next generation in its turn should forget the results of the pains and labor of this. 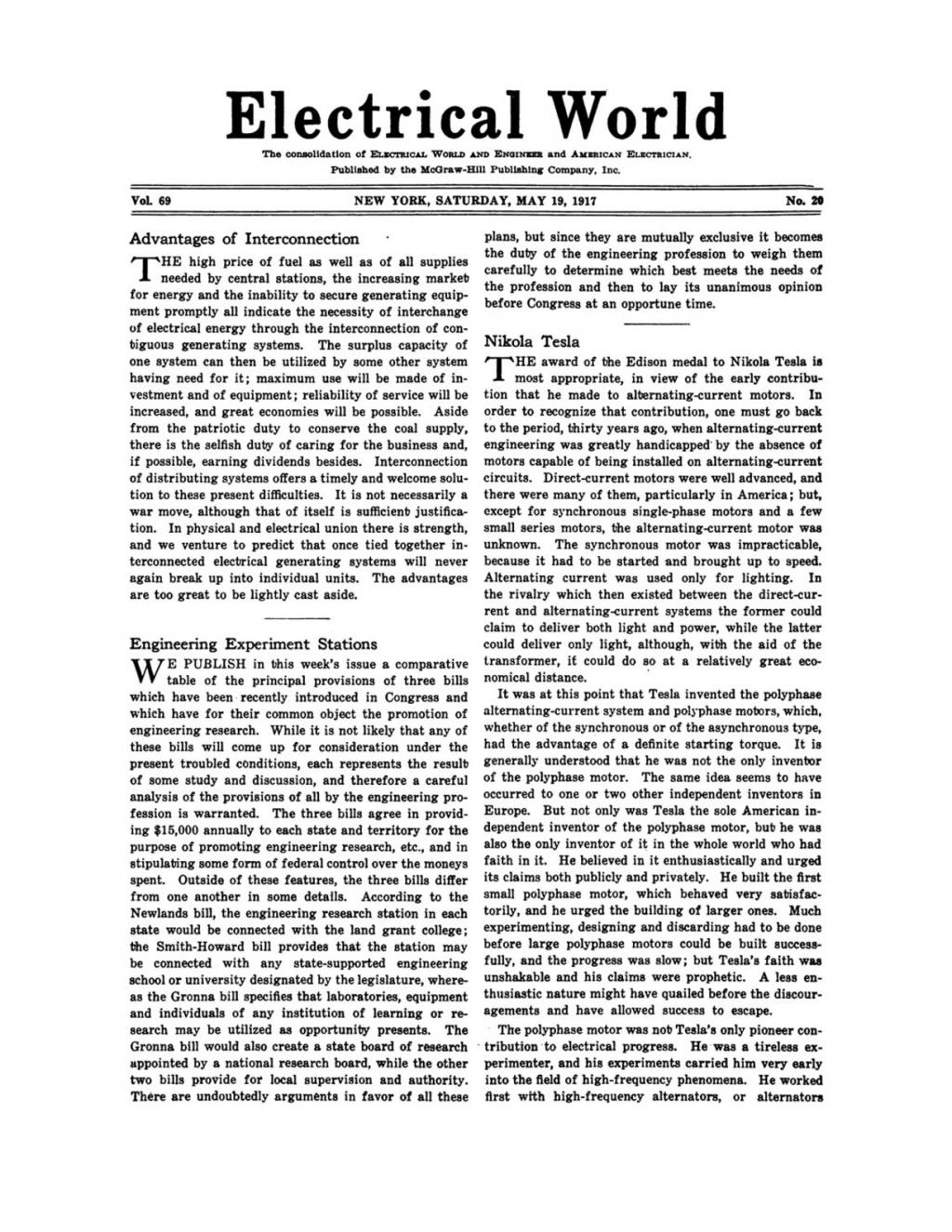