PRESENTATION OF AWARD FOR EARLY ORIGINAL WORK AND TRIBUTES TO THE INVENTOR — NEW A. I. E. E. OFFICERS

Presentation of the Edison medal to Nikola Tesla and formal report upon the newly elected officers were the announced features of the annual meeting of the American Institute of Electrical Engineers in New York on the evening of May 18.

As stated previously in the Electrical World, the Edison medal is presented to Mr. Tesla for “early original work in polyphase and high-frequency electric currents.” Dr. A. E. Kennelly as chairman of the Edison medal committee outlined the origin and purpose of this honor and gave a brief history of past awards.

Charles A. Terry, whose subject was a presentation of historical facts regarding the Tesla patents, contributions to the arts, etc., said in part:

“It is the God-given desire to accomplish and to give that has produced the Michael Angelos, Galileos, the Sir Christopher Wrens, the Livingstones, Newtons, Franklins, Westinghouses, Edisons and scores of other makers of history — men whose names we retain in affectionate remembrance because they earnestly responded to the call from within and by patient toil conceived thoughts and discovered things of value which they promulgated for the benefit of their fellow men. Twenty-nine years ago this month there was presented before this Institute a paper of unusual import. It is entitled ‘A New System of Alternate-Current Motors and Transformers.’ The author, Nikola Tesla, was then only thirty-one years of age and had been for only four years a resident of this country. His early life was spent near his birthplace not far from the eastern Adriatic coast. His father, a Greek clergyman, and his mother, herself of an inventive mind, secured for their young son a comprehensive training in mathematics, physics and philosophy. At the age of twenty-two he had completed his studies in engineering at the Polytechnic School in Gratz and also a course in the University of Prague, and in 1881 he began his practical work at Budapest. In 1883 he was at Strasbourg, engaged in completing the lighting of a newly erected railway station. Shortly after finishing this undertaking he came to the United States.

“Throughout all these years his desire had been to find an opportunity to demonstrate the truth of a conviction which became fixed in his mind while studying direct-current motors in school at Gratz in 1878. The conviction was that it should be possible to create a rotating magnetic field without the use of commutators. While at Strasbourg Tesla had succeeded in producing the rotation of a pivoted iron disk placed in a coil traversed by alternating currents, a steel bar being projected into the coil in the neighborhood of the disk. His conception of the reason for this rotation at that time was that a lag occurred in the subsidence of the magnetism of both the disk and the steel bar between successive current waves, and that the mutual repulsions caused the disk to revolve. By some fortunate process of reasoning he conceived while in Budapest in 1882 that by using two or more out-of-phase alternating currents respectively passing through geometrically displaced coils it would be possible to develop his long-sought progressively shifting magnetic field.

“Lack of funds and facilities for working out his theory compelled still further postponement, but in 1885 Tesla had the good fortune to interest men of means in a direct-current arc light which he had devised, and subsequently a laboratory was equipped for him in Liberty Street, New York, and here at last he found opportunity to demonstrate the correctness of his long-cherished theory. In 1887 he was able to exhibit to his business associates and to Prof. William A. Anthony, whose expert opinion they sought, motors having such progressively shifting fields without the use of commutators as he had foreseen nine years before.

“Having thus demonstrated the correctness of his theory and the feasibility of its application, it remained for Tesla to work out various practical methods of applying the principle, and the rapidity and wonderful way in which he surrounded the entire field of constant-speed, synchronous, induction and split-phase motors is beautifully set forth in his paper of May 18 and in the numerous patents issued May 1, 1888, and succeeding years, covering the forms of electric motors, which have since become the almost universal means for transforming the energy of alternating currents into mechanical energy.

“It is somewhat difficult to eliminate from our minds the developments of the last thirty years which have now become every-day features of the electrical industry and to realize the meagerness of the then existing knowledge of alternating-current phenomena. The commercial use of alternating-current systems of distribution was then scarcely two years old. The Gaulard & Gibbs system of series transformers had been used abroad in a limited way for a slightly longer period, but the multiple-arc system based upon the so-called ‘Stanley rule,’ which initiated the great development of the present system, was not put in practical operation in the pioneer Great Barrington plant until March, 1886. It was then recognized that while the alternating current possessed wonderful possibilities for electrical distribution for lighting purposes, two almost necessary devices were lacking to render it a complete success, one a meter, the other a power motor. Prof. Elihu Thomson promptly devised a successful form of meter, the motive portion of which comprised a laminated field and armature, the coils of the latter being periodically close-circuited during revolution by a commutator. To fill the demand for a power motor, however, the most promising device then suggested was a series commutator motor with laminated field and armature cores, but no satisfactory results had been obtained. Such was the situation when Tesla’s achievement was announced in the Institute paper to which reference has been made.

“Among the first to recognize the immense importance of Mr. Tesla’s motors were Mr. Westinghouse and his advisers, T. B. Kerr, Mr. Byllesby, Mr. Shallenberger and Mr. Schmid, and Mr. Westinghouse secured an option which shortly resulted in the purchase of the patents, thus bringing under one ownership the alternating-current transformer system of distribution and the Tesla motor. It is interesting to note here that Mr. Shallenberger had about two weeks before the publication of the Tesla patents independently devised an alternating-current meter the principle of operation of which was that of the Tesla motor, and whatever might have been Mr. Shallenberger’s natural disappointment upon finding himself thus anticipated, he at once recognized that to Mr. Tesla belonged the honor of being the first to solve the great fundamental problem of an alternating-current motor. A warm friendship between these two men began at once and continued through Mr. Shallenberger’s life, and Mr. Tesla rejoiced to accord to Mr. Shallenberger full credit for the latter’s brilliant work in producing what is now the standard meter for alternating currents.

“It will be appropriate to refer to the opinion of Judge Townsend of the United States Circuit Court, rendered in August, 1900, from which I quote the following: ‘The Tesla discovery for which these patents were granted revolutionized the art of electrical power transmission, as well demonstrated in the record from both judicial and scientific standpoints.’”

Mr. Terry went on to enumerate Tesla’s experimental work in connection with wireless transmission of power and the control of the movements of torpedoes and boats, as well as his contributions in the field of the Roentgen ray, his various electrical inventions, and the bladeless steam turbine for which commercial success is hoped.

TRIBUTE OF B. A. BEHREND

“By an extraordinary coincidence, it is exactly twenty-nine years ago, to the very day and hour, that there stood before this Institute Nikola Tesla, and he read a description of his great discovery of the generation and utilization of polyphase alternating currents. He left nothing to be done for those who followed him. His paper contained the skeleton even of the mathematical theory.

“Three years later, in 1891, there was given the first great demonstration, by Swiss engineers, of the transmission of power at 30,000 volts from Lauffen to Frankfort by means of Mr. Tesla’s system. A few years later this was followed by the development of the Cataract Construction Company, under the presidency of our member, Edward D. Adams, and with the aid of the engineers of the Westinghouse company. It is interesting to recall here to-night that in Lord Kelvin’s report to Mr. Adams, Lord Kelvin recommended the use of direct current for the development of power at Niagara Falls and for its transmission to Buffalo.

“The basis for the theory of the operating characteristics of Mr. Tesla’s rotating-field induction motor, so necessary to its practical development, was laid by the brilliant French savant Prof. André Blondel, and by Professor Kapp of Birmingham. It fell to my lot to complete their work and to co-ordinate — by means of the simple ‘circle diagram’ — the somewhat mysterious and complex experimental phenomena. As this was done twenty-one years ago, it is particularly pleasing to me, upon the coming of age of this now universally accepted theory — tried out by application to several million horsepower of machines operating in our great industries — to pay my tribute to the inventor of the motor and the system which have made possible the electric transmission of energy. His name marks an epoch in the advance of electrical science. From that work has sprung a revolution in the electrical art.”

President H. W. Buck was scheduled to present the medal to Tesla. 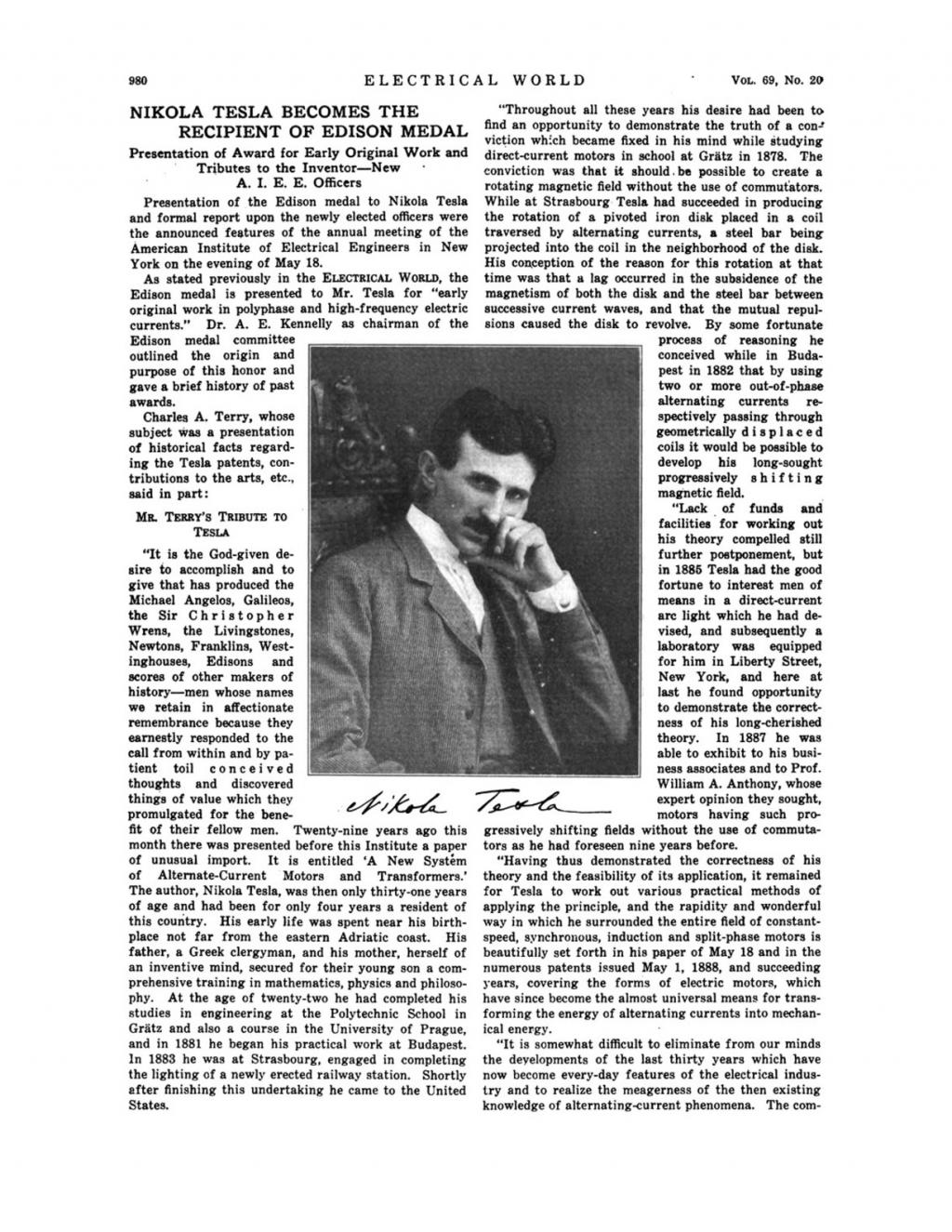