Scientist Did Not Communicate With Creditors While Communicating With Mars.

New York. June 13. — Because Nikola Tesla, propounder of a theory of communications with Mars, has failed to satisfy a judgment of $1,108.20, the mysterious tower at Wardenclyfffe, L. I. has been advertised for sale by Sheriff Wells of Suffolk county. Mr. Tesla has expended a fortune upon his electrical experimental works in Wardenclyffe, whose purpose he has kept to himself. Only his closest friends were permitted to get within seeing distance of his “wonder tower” as the huge structure of steel and cement was called, and no one appears to know exactly what it was intended for. That it was to be used to demonstrate his theory of communicating with the Martians is popularly believed.

The judgment is held by Dr. James A. Warden. The security is the 200 acres owned by Tesla, upon which stands the tower, which is sunk into the ground a distance of 150 feet and is 150 feet in height, according to Tesla's statements to his friends.

The tower has a great mushroom top, from which there used to be blinding flashes of electricity at night some years ago.

Mr. Tesla, when seen at the Waldorf-Astoria hotel last night, said the case was an old one, the judgment growing out of an option he had taken upon the land. He said that the matter would be settled.

Colorado Springs, Colo., June 13. — Nikola Tesla about ten years ago erected a laboratory and tower on Nob Hill near this city for experiments in the transmission of power without wires. The plant was valued approximately at $30,000. The eccentricities of his genius prevented him paying any attention to money matters, with the result that shortly after he left this city the caretaker of the plant, a man named Duffner, sued Tesla for about $1,000 salary. Subsequently the assessor's office levied upon the property for taxes with the result that the machinery was sold under the judgment obtained by Duffner and the taxes were paid out of the proceeds of the sale. 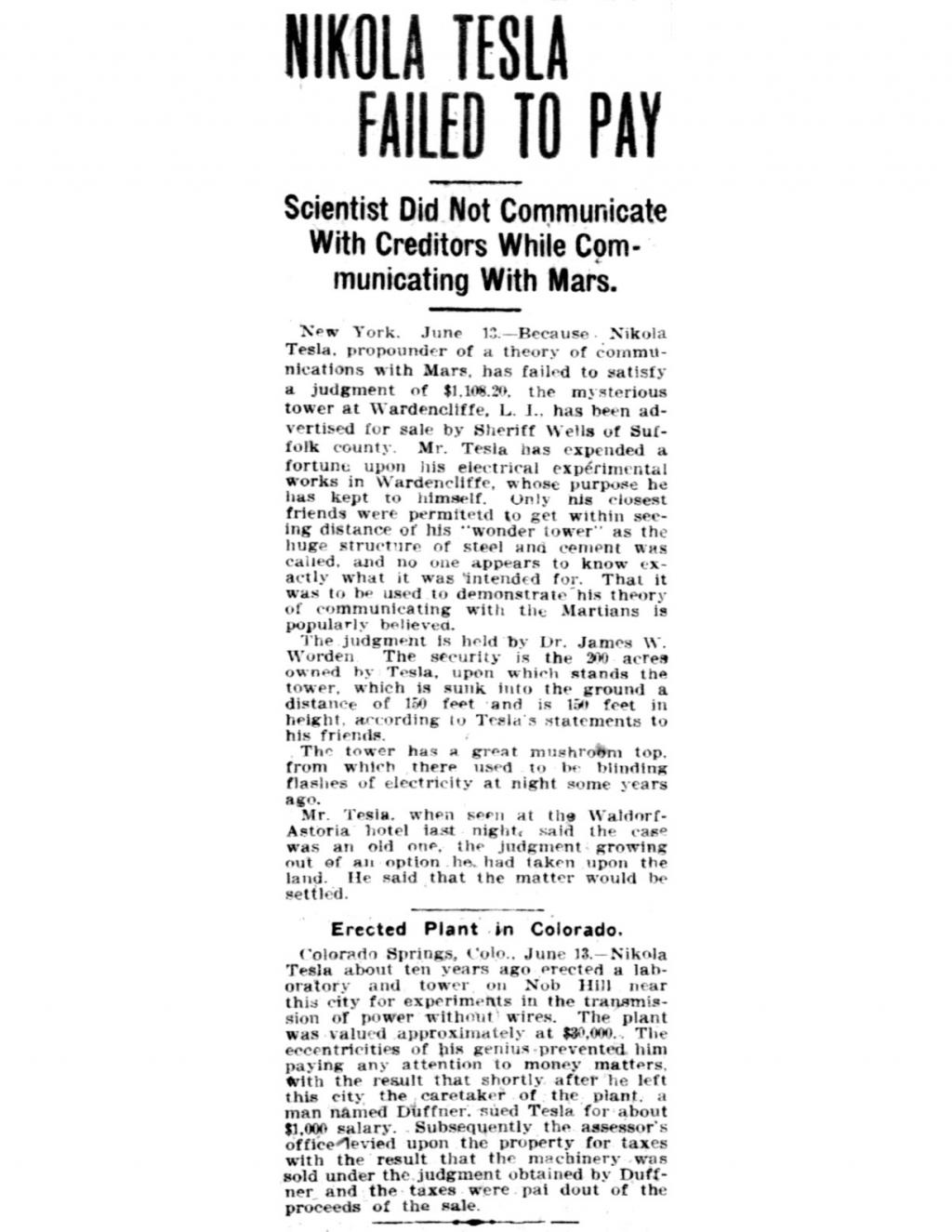