Tesla Says Wireless Waves Are Not Electromagnetic, But Sound In Nature

Predicts Power Transmission to Other Planets

The assumption of the Maxwellian ether was thought necessary to explain the propagation of light by transverse vibrations, which can only occur in a solid. So fascinating was this theory that even at present it has many supporters, despite the manifest impossibility of a medium, perfectly mobile and tenuous to a degree inconceivable, and yet extremely rigid, like steel. As a result some illusionary ideas have been formed and various phenomena erroneously interpreted. The so-called Hertz waves are still considered a reality proving that light is electrical in its nature, and also that the ether is capable of transmitting transverse vibrations of frequencies however low. This view has become untenable since I showed that the universal medium is a gaseous body in which only longitudinal pulses can be propagated, involving alternating compressions and expansions similar to those produced by sound waves in the air. Thus, a wireless transmitter does not emit Hertz waves which are a myth, but sound waves in the ether, behaving in every respect like those in the air, except that, owing to the great elastic force and extremely small density of the medium, their speed is that of light.

Since waves of this kind are all the more penetrating, the shorter they are, I have urged the experts engaged in the commercial application of the wireless art to employ very short waves, but for a long time my suggestions were not heeded. Eventually, though, this was done, and gradually the wave lengths were reduced to but a few meters. Invariably it was found that these waves, just as those in the air, follow the curvature of the earth and bend around obstacles, a peculiarity exhibited to a much lesser degree by transverse vibrations in a solid. Recently, however, ultrashort waves have been experimented with and the fact that they also have the same property was hailed as a great discovery, offering the stupendous promise to make wireless transmission infinitely simpler and cheaper.

It is of interest to know what wireless experts have expected, knowing that waves a few meters long are transmitted clear to the antipodes. Is there any reason that they would behave radically different when their length is reduced to about half of one meter?

As the general knowledge of this subject seems very limited, I may state, that even waves only one or two millimeters long, which I produced thirty-three years -ago, provided that they carry sufficient energy, can be transmitted around the globe. This is not so much due to refraction and reflection as to the properties of a gaseous medium and certain peculiar action which I shall explain some time in the future. At present it may be sufficient to cell attention to an important fact in this connection, namely, that this bending of the beam projected from reflector does not affect in the least its behavior in other respects. As regards deflection in a horizontal plane, it acts just as though it were straight. To be explicit the horizontal deviations are comparatively slight. In a proposed ultrashort wave transmission, the vertical bending, far from being an advantage, is a serious drawback, as it increased greatly the liability of disturbances by obstacles at the earth's surface. The downward deflection always occurs, irrespective of wave length, and also if the beam is thrown upward at an angle to the horizontal, and this tendency is, according to my finding, all the more pronounced the bigger the planet. On a body as large as the sun, it would be impossible to project a disturbance of this kind to any considerable distance except along the surface.

It might be inferred that I am alluding to the curvature of space supposed to exist according to the teachings of relativity, but nothing could be further from my mind. I hold that space cannot be curved, for the simple reason that it can have no properties. It might as well be said that God has properties. He has not, but only attributes and these are of our own making. Of properties we can only speak when dealing with matter filling the space. To say that in the presence of large bodies space becomes curved, is equivalent to stating that something can act upon nothing. I, for one, refuse to subscribe to such a view.

The chief object of employing very short waves is to provide an increased number of channels required to satisfy the ever-growing demand for wireless appliances. But this is only because the transmitting and receiving apparatus, as generally employed, is ill-conceived and not well adapted for selection. The transmitter generates several systems of waves, all of which, except one, are useless. As a consequence, only an infinitesimal amount of energy reaches the receiver and dependence is placed on extreme amplification, which can be easily affected by the use of the so-called three-electrode tubes. This invention has been credited to others, but as a matter of fact, it was brought out by me in 1892, the principle being described and illustrated in my lecture before the Franklin Institute and National Electric Light Association. In my original device I put around the incandescent filament a conducting member, which I called a "sieve." This device is connected to a wire leading outside of the bulb and serves to modify the stream of particles projected from the filament according to the charge imparted to it. In this manner a new kind of detector, rectifier and amplifier was provided. Many forms of tubes on this principle were constructed by me and various interesting effects obtained by their means shown to visitors in my laboratory from 1893 to 1899, when I undertook the erection of an experimental world-system wireless plant at Colorado Springs.

During the last thirty-two years these tubes have been made veritable marvels of mechanical perfection, but while helpful in many ways they have drawn the experts away from the simpler and much superior arrangement which I attempted to introduce in 1901. My plans involved the use of a highly effective and efficient transmitter conveying to any receiver at whatever distance, a relatively large amount of energy. The receiver is itself a device of elementary simplicity partaking of the characteristics of the ear, except that it is immensely more sensitive. In such a system resonant amplification is the only one necessary and the selectivity is so great that any desired number of separate channels can be provided without going to waves shorter than a few meters.

For this reason, and because of other shortcomings, I do not attach much importance to the employment of waves which are now being experimented with. Besides, I am contemplating the practical use of another principle, which I have discovered and which is almost unlimited in the number of channels and in the energy three-electrode tubes. This invention has been credited to others, but as a matter of fact, it was brought out by me in 1892, the principle being transmitted. It should enable us to obtain many important results heretofore considered impossible. With the knowledge of the facts before me, I do not think it hazardous to predict that we will be enabled to illuminate the whole sky at night and-that eventually we will flash power in virtually unlimited amounts to planets. It would not surprise me at all if an experiment to transmit thousands of horsepower to the moon by this new method were made in a few years from now. 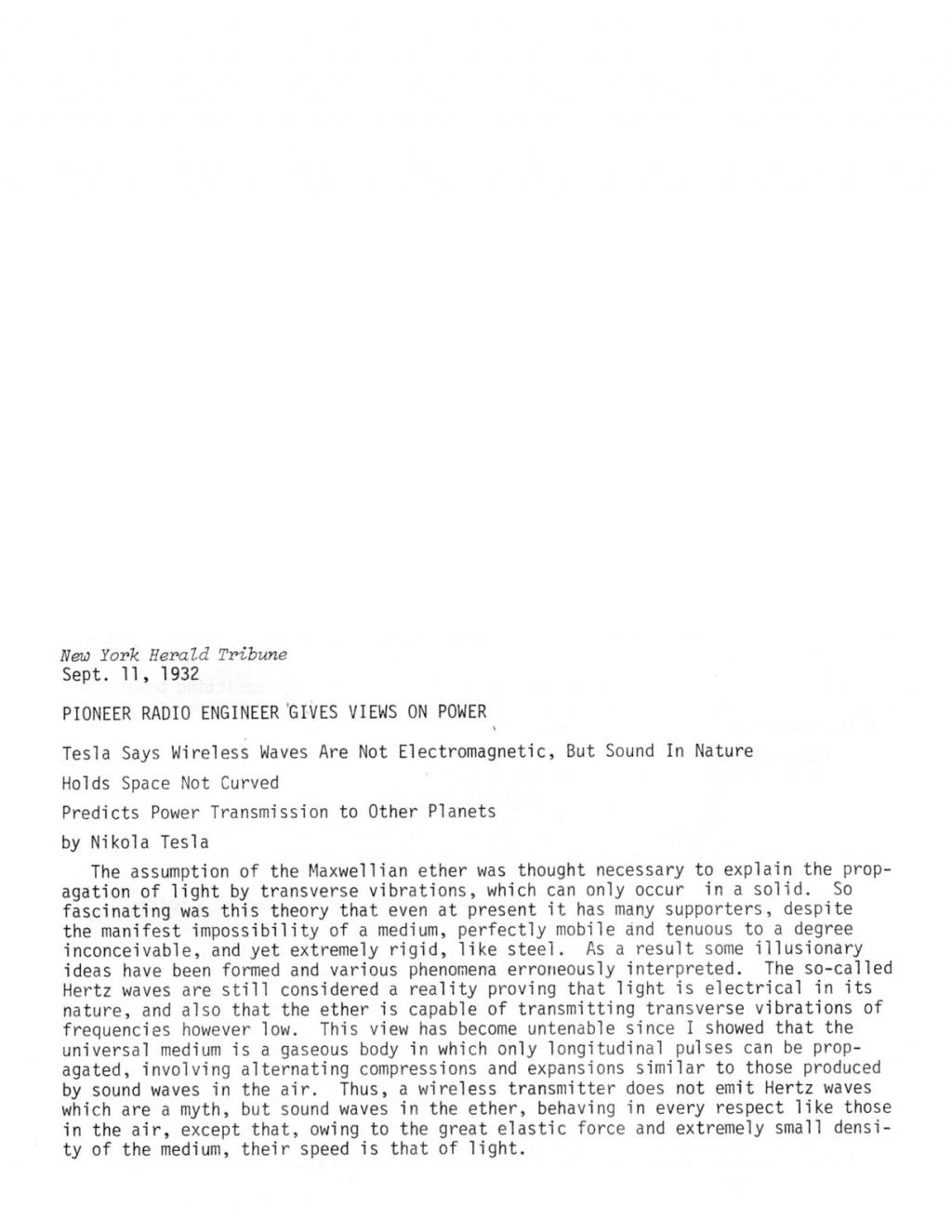