Not too many people realize it, but transmission of the first commercial high pressure alternating current electrical power was developed in the San Juan Mountains near Telluride at about the same time gold was discovered there.

Development of electrical power for the Gold King Mill, located at an altitude of 12,000 feet, was a necessity if the mine's potential was to be tapped. All the trees in the immediate area had been chopped down to supply fuel for the steam plant. Then it was noted that down in a gorge, less than three miles away, and 2,000 feet lower, two mountain streams came together to form the South Fork of the San Miguel River. The cascading water offered a cheap and continuous form of power — if it could be converted into electricity and transmitted to the Gold King Mill.

But by 1890 a generator and a motor of 3,000 volts capacity and developing 100 horsepower were ready.

The generator, installed in a cabin at Ames, was belted to a water wheel for power. The motor was located at the Gold King mill, 2.6 miles away. Charles Westinghouse, whose company had manufactured the generator and motor came out to help.

All sorts of complex problems were encountered, such as 40 below weather causing water flowing over the water wheel to freeze. Control of the speed of the flowing water was difficult. Blizzards and snowslides, plus electrical storms hampered the work. In addition to obstacles placed by nature, some of the superstitious miners were afraid the air would become supercharged with high voltage electricity, dynamited the poles erected to support the transmission lines.

But the generator and motor worked, and. ran for three years.

And, nearly 75 years later, southwestern Colorado and the entire western slope is in another boom, based entirely upon the needs of the nation for more electric power, generated here and transmitted to points of use.

The biggest investor in electricity is the federal government through the Bureau of Reclamation. Its construction of dams on the Upper Colorado River system alone totals many millions of dollars in investment of tax monies.

The Colorado-Ute Electric Association, a cooperative with headquarters in Montrose, has a total investment of $50 million.

Western Colorado Power Co., headquartered in Montrose, a private investor operation which developed out of the Telluride Co., pioneers of alternating current, has a total investment of $16.3 million.

The combination of these three electric power generation and transmission systems will develop in excess of five million kilowatts of electricity. Not only will the three generate on their own, but they will be interconnected with power pools of the Northwest, the Pacific Coast, the southwest, the southern and midwest systems.

In fact, the BuRec's power operations control center being built at Montrose will fill a long existing void and will serve to connect all these power pools, enabling one to serve the other when additional demands are made and must be met.

In the foreseeable future, just as it was for seen by P. N. Nunn who reported in 1905 on the development of alternating current by The Telluride Co., the vast amount of electrical power being developed in this area will be the solid foundation of an entirely new economy. In the minds of engineers who deal exclusively with generation of electrical power and its uses, electricity will become a very cheap form energy.

E. M. Naughton, president and general manager of the Utah Power and Light Co., in a talk in Montrose recently, pointed out the fact that the average cost of electricity has dropped 50 per cent in the last ten years. This has happened in spite of the spiraling costs of material and labor.

Cheap electricity, furnished through Bureau of Reclamation Projects on the Upper Colorado River System, through the Colorado-Ute Electrical 13-member Association, and through the private investor companies of Western Colorado Power, Utah Power and Light Co., and Public Service will be available for open hearth furnaces for smelting ore, for example.

An ore that has been untouched and undeveloped, according to the experts, is rhodonite. Rhodonite, in a sense comparable to tellurium which contains gold, has resisted mining men in their efforts to extract manganese, which it contains. 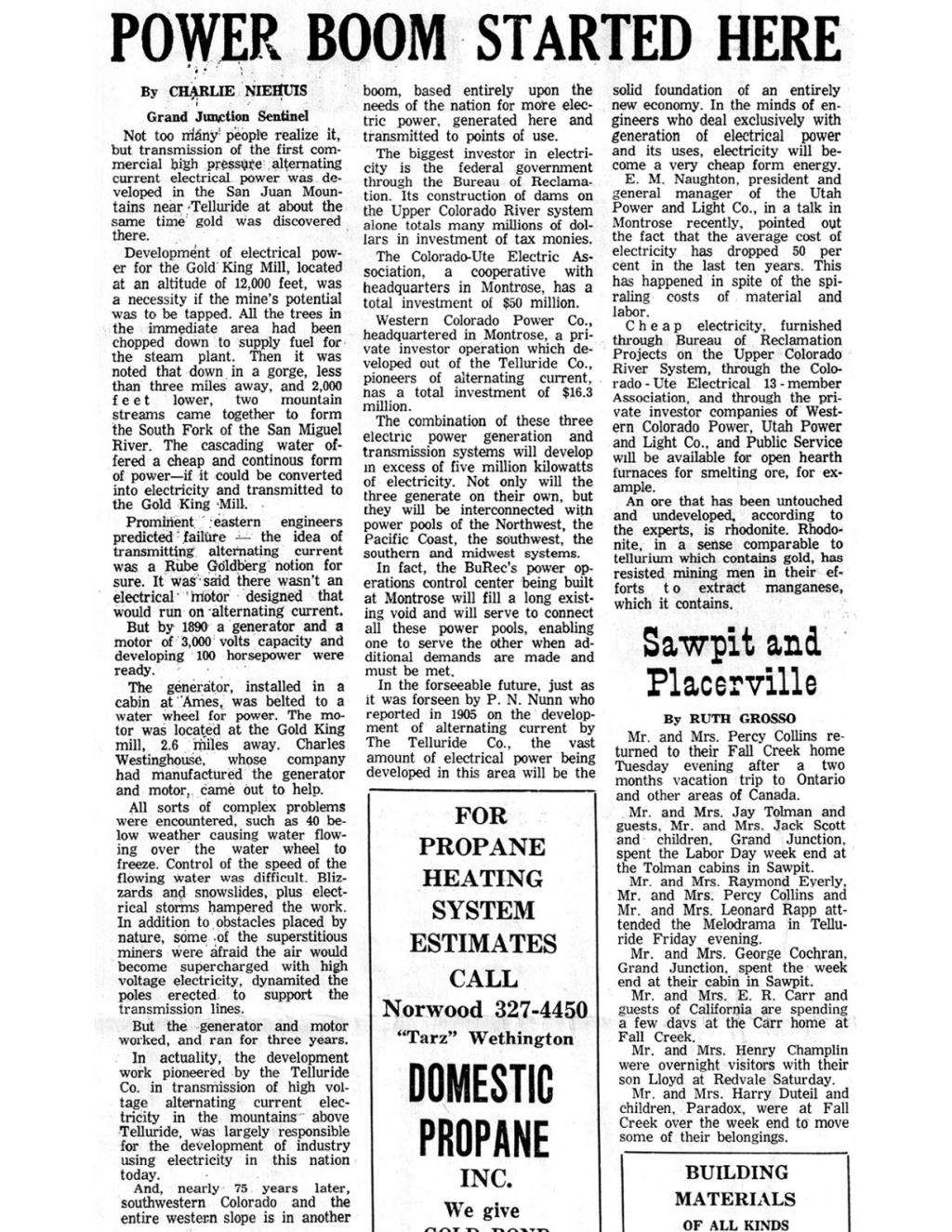