It isn't often that a historical marker is dedicated in Colorado Springs, and therefore the ceremonies dedicating a marker to the memory of the electronic age genius, Nikola Tesla, Monday afternoon at Memorial Park, was on of those events on which historians can look with pride.

Some hundred members of the Pikes Peak Region Historical Society, and other interested persons, were in attendance at the historic dedication event.

The historical marker was erected to commemorate the inventor, as well as the site where Tesla erected his electrical laboratory during his stay in Colorado Springs, in 1899.

The ceremonies opened at 4 p.m. with Vice Mayor Harold Hawks officiating, and featured a talk on the accomplishments of Tesla by Eugene C. Goodwin, zone manager of electric utility sales for Westinghouse Electric Co. of St. Louis, Mo. 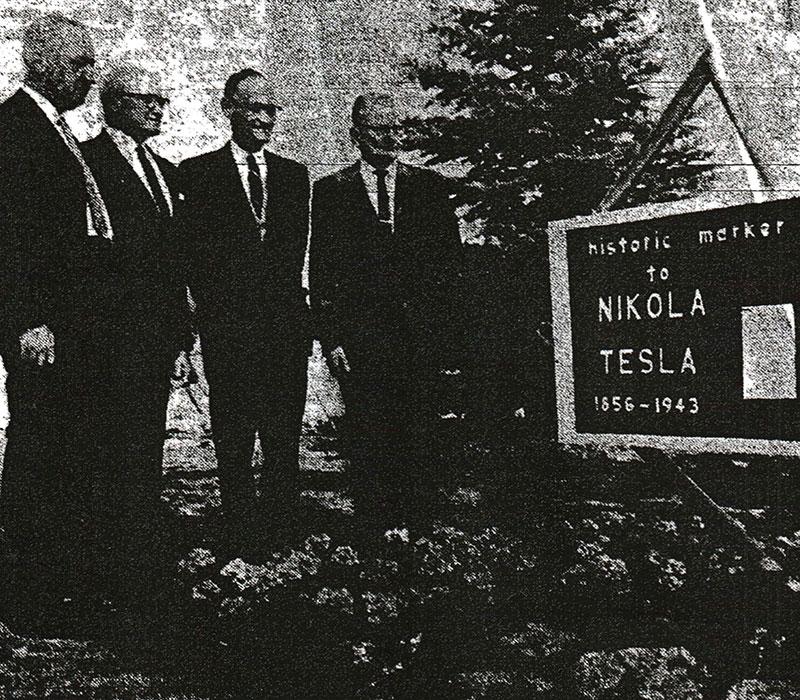 Among other officials in attendance were Dr. Richard M. Pearl, president of the historical society; Stuart Richter, director of the city park and recreation department, which erected the marker on city park land; Sen. Paul Bradley, personal representative of Westinghouse, James Springer, Colorado president of the Institute of Electrical and Electronic Engineers.

Also in attendance were authors Inez Hunt and Wanetta Draper, whose book about Tesla's like and work, entitled “Lightning in His Hand” has sparked new national interest in the accomplishments of the genius who ushered in the modern power era.

In his dedication talk, Goodwin pointed out “it is quite possible that Tesla was the greatest inventor that ever lived. He may have done more to change our lives that any man in history.” Tesla's victory at Niagara Falls, proving the practicability of the alternating current, “spelled an end to the age of steam and brought the miracle of abundant power to far-flung homes, farms and factories,” Goodwin said.

In addition, Tesla forecast such modern developments as the laser beam, guided missile defense systems, a death ray, and even reception of signals from outer space.

Tesla's great inventions were put into practice in collaboration with and by George Westinghouse, founder of the Westinghouse industry.

The afternoon ceremonies came to a climax with a religious memorial service chanted by the Rev. Paul Fedec of St. Mary's Eastern Orthodox Church of Calhan in his golden vestments, attended by two alter boys.

The afternoon ceremonies were followed by a subscription dinner at the El Paso Club, attended by city, state, historical, and Westinghouse officials, at which Dr. Pearl presided, with the greetings of the city extended by Mayor Harry Hoth and Clay Banta of the Chamber of Commerce. The story of Tesla was told again by Goodwin, as well as by the authors Mrs. Hunt and Mrs. Draper.

The historical dinner at the El Paso Club was held 67 years following a dinner honoring Tesla at the same club in Colorado Springs. Mrs. Hunt read a report to the meeting of the dinner held 67 years ago, and Mrs. Draper introduced a number of people who had contact with the inventor in years gone by.

In his talk at the evening meeting, Goodwin discussed Tesla's life and inventions, and pointed out that it was through Tesla's work that the modern age of electronic marvels was made possible.

The Tesla Day commemoration was one of those important historical evens which once more focuses attention on Colorado Springs. 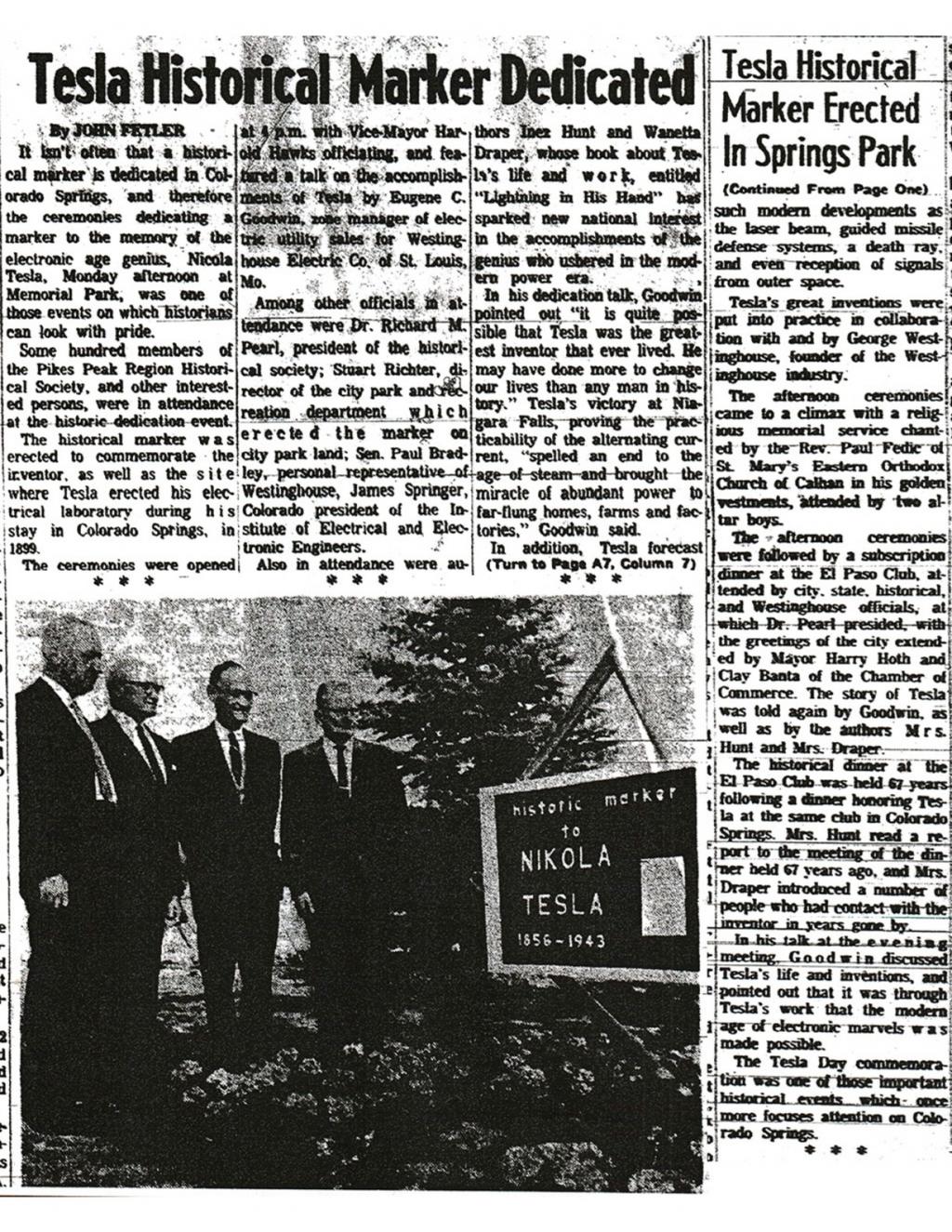