The editor of RADIO-CRAFT invited America's .leading radio men scientists to contribute their views on the outstanding achievements of Dr. Nikola Tesla. Their expressions follow:

From the President of the Radio Corporation of America

Nikola Tesla's achievements in electrical science are monuments that symbolize America as a land of freedom and opportunity. Fascinated by electricity, Tesla in the 80's naturally heard of Edison. He read that in America the Electrical Age was opening. To such a brilliant mind, a mind that dreamed of a world run by electricity, America was a powerful magnet. It attracted him across the Atlantic.

A dream came true and ambition was served when, soon after arrival on these shores, he went to work designing dynamos and motors in Edison's laboratory. American freedom and Tesla's spirit of independence led him as an original thinker to work free-lance. To him freedom and solitude were more important than money or a big laboratory. He dealt in new ideas — ideas, which to many others were fantastic. Throughout his Iife he kept on dreaming, and living more and more alone with his dreams.

Tesla, however, was not one whose dreams became his master. He mastered them, especially in the Nineties when he gave to the world the induction motor that made it possible for power transmission from Niagara to run the street cars in Syracuse, 160 miles away. He discovered the rotary magnetic field principle, invented the Tesla coil or transformer and many other electrical devices.

He pioneered in wireless. His novel ideas of setting the ether in vibration and then tuning for the waves put him on the frontier of wireless. Tesla's mind was a human dynamo that whirled to benefit mankind.

From “The Father of Radio”

Nikola Tesla's brilliant achievements, especially in the then new realm of high-frequency currents, were the guiding inspiration of my education in electrical engineering.

I aspired then to follow in his footsteps, for he convinced me that the next further development in the electrical art lay in wireless transmission, either of power, as for lighting purposes, or for signalling over large distances.

My personal debt therefore to Nikola Tesla is inexpressible.

The transcendent brilliance of his early career, as pioneer in polyphase currents and in the science of long-distance power transmission, places his name high among the few immortals, founders of the Electrical Age.

From the President of the Institute of Radio Engineers

The advance of science, and the advance of civilization itself, result from the contributions of many individuals to the integrated whole. The process is like putting together a jig-saw puzzle, which becomes more easy as the complete picture is approached, and is more difficult in the early stages where guiding signs are few.

His passing makes us pause to remember those early pathfinding struggles and triumphs, and that we owe a debt to Nikola Tesla for his contributions to the situation we now enjoy. The radio engineering profession for which I speak, acknowledges that debt and gives tribute to Tesla, one of its pioneers.

From the Chief Signal Office of the U. S. Army

It is with a deep sense of appreciation that I join, on behalf of the Army Signal Corps, ARMY in this testimonial to one of the pioneers of electrical science, Nikola Tesla. As a young man, during the last years of the 19th century, Tesla made fundamental contributions to electrical engineering. In his later years, he lived to see his inventions incorporated into the very fabric of our civilization and play a vital part in the technology of modern war.

Tesla's place in history rests on his early discoveries in alternating currents. In the years since those discoveries were made, alternating currents have been extended from the low-frequency field of power engineering to the high frequency and ultra-high frequency field of signal communication, as well as to other electronic applications of utmost importance both in peace and war. A great proportion of the work of the Army Signal Corps. is based upon the application of these alternating current phenomena. The armed forces of the United Nations have good cause to be grateful for Tesla's work and to pay tribute to his memory.

From the Inventor of the Superheterodyne and Frequency Modulation

Nikola Tesla's inventions in the field of polyphase currents and the induction motor would alone perpetuate his fame. On this work, because of its early date I hardly feel able to comment; others are better qualified than I. But of his later work in the field of high frequency, high potential alternating currents, I do feel qualified to speak, for it was to exercise a most important effect on my career.

Who today can read a copy of “The Inventions, Researches and Writings of Nikola Tesla”, published before the turn, of the century, without being fascinated by the beauty of the experiments described and struck with admiration for Tesla's extraordinary insight into the nature of the phenomena with which he was dealing? Who now can realize the difficulties he must have had to overcome in those early days? But one can imagine the inspirational effect of the book 40 years ago on a boy about to decide to study the electrical art. Its effects was both profound and decisive.

And in the companion book, published in 1904, entitled. “Experiments With Alternate Currents of High Potential and High Frequency”, there is a remarkable chapter headed “The Transmission of Electric Energy Without Wires”, Concealed, perhaps, by its too prophetic style (although a surprising number of the prophecies have come true), there is a complete appreciation of the use of radio in the broadcasting of information, with full emphasis on its social implications.

The world, I think, will wait a long time for Nikola Tesla's equal in achievement and imagination.

From the Inventor of the Alexanderson Alternator

I knew Tesla just enough to get an impression of an amiable personality and a dreamer with his head in the clouds. His invention of the induction motor was the greatest single contribution to the use of electric power but characteristically he left it to others to follow up this idea while he continued to speculate on the transmission of power by electric waves. Marconi took the wave theory and made something practical out of it while Tesla was reaching for the unattainable.

From time to time there appears in the world a great dreamer whose function seems to he to shock more realistic minds into action. Nikola Tesla was one of those.

From the Professor of English Literature, Emeritus, Yale University

Nikola Tesla, whose father was a Greek clergyman and public speaker and his mother an inventor, which talent she inherited from her father, was, of course, educated in Europe, taking honours in mathematics and applied sciences. His first electrical invention was a telephone repeater. He did the United States of America the honour of becoming a resident and naturalized citizen in 1884; for I believe those who choose the United States for citizenship are really to be praised more than those who are born here. In Dr. Tesla's life one invention followed another. He was a multitudinous blessing to the community, to the country, and to mankind, and his death was a personal loss to all who knew him and a subtraction from the civilized world.

From the Former Head of the Signal Corps, Chief Signal Officer U. S. Army, Retired

So another of the great pioneers of wireless telegraphy has passed away! Tesla, “the wizard” as he was known in my youth, who captured the imagination of my generation with his flights of fancy into the unknown realms of space and electricity. A “dreamer,” as he was called by some, with astounding vision far beyond his contemporaries, very few of whom realized until many years after the work of Marconi, that the great Tesla was the first to work out not only the principles of electric tuning or resonance, but actually to design a system of wireless transmission of intelligence in the year 1893.

Who can read the pages of that authoritative and historical work by T. C. Martin published — please note carefully — in the year 1894, and entitled “Inventions, Researches and Writings of Nikola Tesla” without being impressed with the fact that Tesla, before that date, had already developed coupled high frequency resonant circuits; a system of wireless transmission, wherein, as shown by the diagram in Martin's book, was provided an earthed transmitter system with an elevated aerial radiator, later called an antenna — an arrangement attributed to the great Marconi; a high frequency alternator capable of transmitting intelligence in the spectrum of the longest waves still used in radiotelegraphy; also, a resonator which, if used in the circuit diagrammed, would have permitted antenna tuning, and which, if used today as an antenna system in the high frequency ranges without additional antenna or a ground connection, would most certainly be acknowledged as a radio transmitting system by the Federal Communications Commission and ordered licensed?

Let us acknowledge, also, that Tesla was the proponent of the use of stranded fine-conductor cable for high frequency circuits, “invented” in Germany at a much later date.

Careful perusal of Martin's work is highly recommended for radio engineers and historians who know not Tesla as a great pioneer in the field of wireless.

I join most devoutly in the present tribute to his memory.

From the Director of Research of Westinghouse Electric & Mfg. Co.

Nikola Tesla will always be remembered for his original development of oscillation transformers now appropriately called Tesla coils; The great importance of his high frequency investigations in advancing wireless communication is well recognized by all scientists. Equally important but less generally known to the public are his early contributions in advancing the use of electric power.

He conceived the practical induction motor, the first effective method for utilizing alternating current for converting electrical energy into mechanical energy. His many inventions of new forms of dynamos, transformers and other electrical devices were largely instrumental in the adoption of alternating current for the transmission of electric power.

Tesla's enthusiasm has always been an inspiration to all who were fortunate enough to have known him. 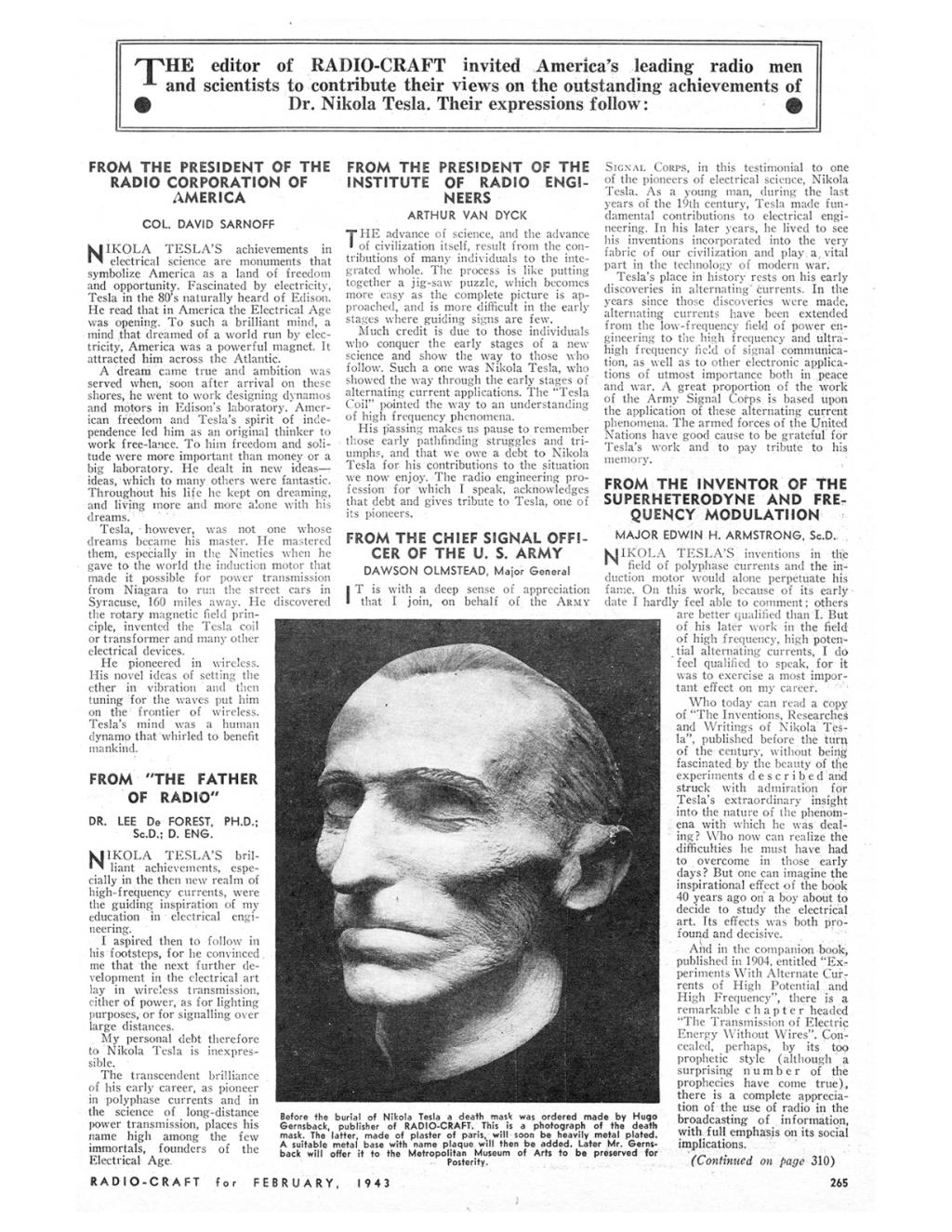