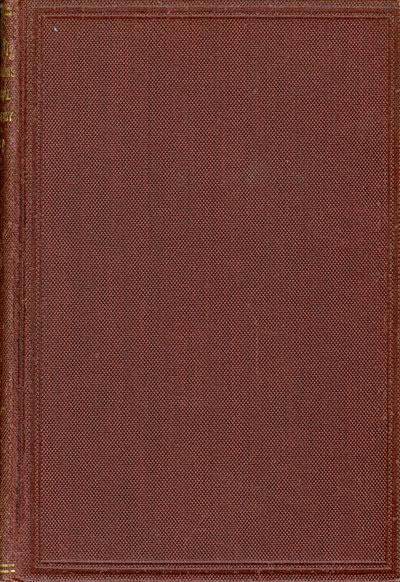 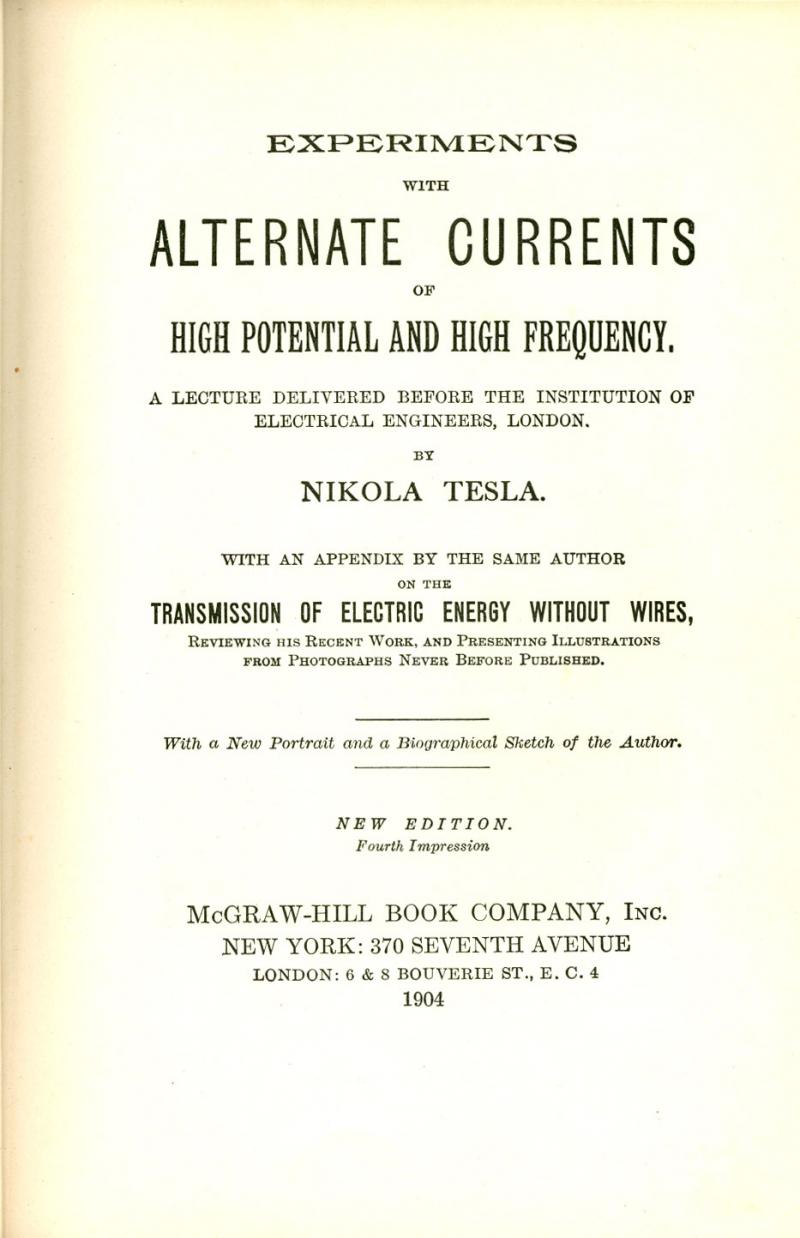 Experiments with Alternate Currents of High Potential and High Frequency

While a large portion of the European family has been surging westward during the last three or four hundred years, settling the vast continents of America, another, but smaller, portion has been doing frontier work in the Old World, protecting the rear by beating back the “unspeakable Turk” and reclaiming gradually the fair lands that endure the curse of Mohammedan rule. For a long time the Slav people—who, after the battle of Kosovo Polje, in which the Turks defeated the Servians, retired to the confines of the present Montenegro, Dalmatia, Herzegovina and Bosnia, and “Borderland” of Austria—knew what it was to deal, as our Western pioneers did, with foes ceaselessly fretting against their frontier ; and the races of these countries, through their strenuous struggle against the armies of the Crescent, have developed notable qualities of bravery and sagacity, while maintaining a patriotism and independence unsurpassed in any other nation.

It was in this interesting border region, and from among these valiant Eastern folk, that Nikola Tesla was born in the year 1856, and the fact that he, today, finds himself in America and one of our foremost electricians, is striking evidence of the extraordinary attractiveness alike of electrical pursuits and of the country where electricity enjoys its widest application.

Mr. Tesla's native place was Smiljan, Lika, where his father was an eloquent clergyman of the Greek Church, in which, by the way, his family is still prominently represented. His mother enjoyed great fame throughout the countryside for her skill and originality in needlework, and doubtless transmitted her ingenuity to Nikola; though it naturally took another and more masculine direction.

The boy was early put to his books, and upon his father's removal to Gospić he spent four years in the public school, and later, three years in the Real School, as it is called. His escapades were such as most quick witted boys go through, although he varied the program on one occasion by getting imprisoned in a remote mountain chapel rarely visited for service; and on another occasion by falling headlong into a huge kettle of boiling milk, just drawn from the paternal herds. A third curious episode was that connected with his efforts to fly when, attempting to navigate the air with the aid of an old umbrella, he had, as might be expected, a very bad fall, and was laid up for six weeks.

About this period he began to take delight in arithmetic and physics. One queer notion he had was to work out everything by three or the power of three. He was now sent to an aunt at Carlstadt, Croatia, to finish his studies in what is known as the Higher Real School. It was there that, coming from the rural fastnesses, he saw a steam engine for the first time with a pleasure that he remembers to this day. At Carlstadt he was so diligent as to compress the four year course into three, and graduated in 1873. Returning home during an epidemic of cholera, he was stricken down by the disease and suffered so seriously from the consequences that his studies were interrupted for fully two years. But the time was not wasted, for he had become passionately fond of experimenting, and as much as his means and leisure permitted devoted his energies to electrical study and investigation. Up to this period it had been his father's intention to make a priest of him, and the idea hung over the young physicist like a very sword of Damocles. Finally he prevailed upon his worthy but reluctant sire to send him to Graz in Austria to finish his studies at the Polytechnic School, and to prepare for work as professor of mathematics and physics. At Graz he saw and operated a Gramme machine for the first time, and was so struck with the objections to the use of commutators and brushes that he made up his mind there and then to remedy that defect in dynamo-electric machines. In the second year of his course he abandoned the intention of becoming a teacher and took up the engineering curriculum. After three years of absence he returned home, sadly, to see his father die ; but, having resolved to settle down in Austria, and recognizing the value of linguistic acquirements, he went to Prague and then to Budapest with the view of mastering the languages he deemed necessary. Up to this time he had never realized the enormous sacrifices that his parents had made in promoting his education, but he now began to feel the pinch and to grow unfamiliar with the image of Francis Joseph I. There was considerable lag between his dispatches and the corresponding remittance from home; and when the mathematical expression for the value of the lag assumed the shape of an eight laid flat on its back, Mr. Tesla became a very fair example of high thinking and plain living, but he made up his mind to the struggle and determined to go through depending solely on his own resources.

Not desiring the fame of a faster, he cast about for a livelihood, and through the help of friends he secured a berth as assistant in the engineering department of the government telegraphs. The salary was five dollars a week. This brought him into direct contact with practical electrical work and ideas, but it is needless to say that his means did not admit of much experimenting. By the time he had extracted several hundred thousand square and cube roots for the public benefit, the limitations, financial and otherwise, of the position had become painfully apparent, and he concluded that the best thing to do was to make a valuable invention. He proceeded at once to make inventions, but their value was visible only to the eye of faith, and they brought no grist to the mill. Just at this time the telephone made its appearance in Hungary, and the success of that great invention determined his career, hopeless as the profession had thus far seemed to him. He associated himself at once with telephonic work, and made various telephonic inventions, including an operative repeater; but it did not take him long to discover that, being so remote from the scenes of electrical activity, he was apt to spend time on aims and results already reached by others, and to lose touch. Longing for new opportunities and anxious for the development of which he felt himself possible, if once he could place himself within the genial and direct influences of the gulf streams of electrical thought, he broke away from the ties and traditions of the past, and in 1881 made his way to Paris. Arriving in that city, the ardent young Likan obtained employment as an electrical engineer with one of the largest electric lighting companies. The next year he went to Strasbourg to install a plant, and on returning to Paris sought to carry out a number of ideas that had now ripened into inventions. About this time, however, the remarkable progress of America in electrical industry attracted his attention, and once again staking everything on a single throw, he crossed the Atlantic.

Mr. Tesla buckled down to work as soon as he landed on these shores, put his best thought and skill into it, and soon saw openings for his talent. In a short while a proposition was made to him to start his own company, and, accepting the terms, he at once worked up a practical system of arc lighting, as well as a potential method of dynamo regulation, which in one form is now known as the “third brush regulation.” He also devised a thermo-magnetic motor and other kindred devices, about which little was published, owing to legal complications. Early in 1887 the Tesla Electric Company of New York was formed, and not long after that Mr. Tesla produced his admirable and epoch-marking motors for multiphase alternating currents, in which, going back to his ideas of long ago, he evolved machines having neither commutator nor brushes. It will be remembered that about the time that Mr. Tesla brought out his motors, and read his thoughtful paper before the American Institute of Electrical Engineers, Professor Ferraris, in Europe, published his discovery of principles analogous to those enunciated by Mr. Tesla. There is no doubt, however, that Mr. Tesla was an independent inventor of this rotary field motor, for although anticipated in dates by Ferraris, he could not have known about Ferraris' work as it had not been published. Professor Ferraris stated himself, with becoming modesty, that he did not think Tesla could have known of his (Ferraris') experiments at that time, and adds that he thinks Tesla was an independent and original inventor of this principle. With such an acknowledgment from Ferraris there can be little doubt about Tesla's originality in this matter.

Mr. Tesla's work in this field was wonderfully timely, and its worth was promptly appreciated in various quarters. The Tesla patents were acquired by the Westinghouse Electric Company, who undertook to develop his motor and to apply it to work of different kinds. Its use in mining, and its employment in printing, ventilation, etc., was described and illustrated in The Electrical World some years ago. The immense stimulus that the announcement of Mr. Tesla's work gave to the study of alternating current motors would, in itself, be enough to stamp him as a leader.

Mr. Tesla is only 35 years of age. He is tall and spare, with a clean-cut, thin, refined face, and eyes that recall all the stories one has read of keenness of vision and phenomenal ability to see through things. He is an omnivorous reader, who never forgets; and he possesses the peculiar facility in languages that enables the least educated native of eastern Europe to talk and write in at least half a dozen tongues. A more congenial companion cannot be desired for the hours when one “pours out heart affluence in discursive talk,” and when the conversation, dealing at first with things near at hand and next to us, reaches out and rises to the greater questions of life, duty and destiny.

In the year 1890 he severed his connection with the Westinghouse Company, since which time he has devoted himself entirely to the study of alternating currents of high frequencies and very high potentials, with which study he is at present engaged. No comment is necessary on his interesting achievements in this field; the famous London lecture published in this volume is a proof in itself. His first lecture on his researches in this new branch of electricity, which he may be said to have created, was delivered before the American Institute of Electrical Engineers on May 20, 1891, and remains one of the most interesting papers read before that society. It will be found reprinted in full in The Electrical World, July 11, 1891. Its publication excited such interest abroad that he received numerous requests from English and French electrical engineers and scientists to repeat it in those countries, the result of which has been the interesting lecture published in this volume.

The present lecture presupposes a knowledge of the former, but it may be read and understood by any one even though he has not read the earlier one. It forms a sort of continuation of the latter, and includes chiefly the results of his researches since that time.