In Search of Fireball Lightning

The author’s latest experiments have provided new insight into one of physics’ biggest mysteries. Here’s a report on those rather unique experiments, and the results that they produced.

Nikola Tesla’s achievements and discoveries have done much to shape modem electronics. After all, among his patents are those for the AC motor and the tuned circuit. But none of his achievements were more spectacular than his legendary 12.5-million volt Tesla Coil. The coil was built in Colorado Springs, CO, in 1899, as part of TesIa’s experiments in worldwide communications (although some say he was also interested in the transmission of power). But it is not the experiment that is of interest here, instead, it is one of the byproducts that it produced.

Ball lightning
In his diary, Tesla made note of little fireballs that were produced during his experiment. Those fireballs measured about an inch and a half in diameter, and persisted even after his apparatus was turned off. Though their production was accidental, it was also repeatable.

The nature of ball lightning, or fireballs, have long been a mystery. That phenomenon consists of glowing balls, apparently of electrical plasma, that are a foot or less in diameter. They appear in the wake of thunderstorms, move slowly, and bounce when they hit the earth or some other solid object.

There was little interest in Tesla’s observations and experiments until the the coming of the “nuclear age.” Since then, nuclear scientists have been struggling to contain and control the plasma of ionized and superheated gases that are necessary for a sustained fission reaction. Since in ball lightning, it appears that electrical plasma is controlled, that phenomenon has drawn attention from a few scientists.

In addition to myself (reports on my work appeared in the June 1976 and February 1981 issues of Radio-Electronics), the two men most interested in this phenomenon were Russia’s Dr. Peter L. Kapitsa, winner of the 1978 Nobel Prize in physics, and James L. Tuck of Manhattan Project fame and the founder of the Los Alamos Plasma Physics Laboratories. Both men are now deceased, but Dr. Tuck left something behind of great importance.

About two years ago, while going through Dr. Tuck’s personal papers at Los Alamos National Laboritories, I came across a series of four sequential photos of a submarine battery-bank circuit breaker being opened; the current through the breaker was on the order of 10,000 amps. Dr. Tuck had shown those pictures to me in 1971, and mentioned that after about 30,000 shots over a 2½ year period, he had gotten only those 4 pictures of what he thought were ball lightning. Three of those photographs are reproduced on the facing page.

Upon seeing those photographs once again, I decided to reproduce Dr. Tuck’s experiments using a real World War II submarine. Unfortunately, there are few of those left in our “nuclear Navy.” The only one I managed to locate was not being used, but that may have been due to the fact that it had no propellers and only one working engine. I thus decided to try the experiment with a diesel railroad locomotive instead.

The next problem was finding a railroad that was willing to loan me a locomotive, box cars, and track for such an experiment. Thankfully, the president of the Boston and Maine railroad had the wisdom, foresight, and love of progress necessary to fulfill my needs; the railroad provided me with two locomotives, a train, and a mile and a half of track. It was because of that, that I was able to conduct 3½ months of experiments that completely altered my thinking on the nature of ball lightning.

First of all, I now feel that it is more of a particle rotation flow than a high voltage electrostatic effect; that is, more like a giant plasma vortex donut with a tiny hole than an electrostatic sphere. Now, there are a whole host of phenomena in aeronautical engineering, particularly in the area of fluid dynamics, that are not yet fully understood. One of those is the physical properties of vorticies. One can blow smoke rings inside of smoke rings, and have the inner ring move back and forth. You can also blow smoke rings that stand perfectly still. In liquids, rings can form spheres and other shapes.

Well, back to the railroad! To perform my experiments, I grafted a submarine circuit breaker into the high-voltage circuit between the million watt, 1600-horsepower diesel generator and the 2000-horsepower motor trucks beneath the locomotive. By opening the circuit breaker (using a long broomstick handle), I was able to generate ball lightning.

The effects of opening the circuit breaker were quite astonishing. Temperatures in the cab of the locomotive would go instantly from 60°F to 110°F. As you might imagine, there was an overwhelming desire to leave the train cab for some fresh air. I, of course, could not do that since the train was still moving (at a speed of about 20 miles an hour), and the likely result would have been running the train off the end of the track and destroying the experimental setup.

In any event, after redoing the experiment countless times, I was able to convince myself that the fireball effect was due to the elimination of turbulence. In fact, I found that when I closed the door and windows of the cab, the effect was most likely to occur.

My earlier experiments involved placing the breaker on the top of the locomotive, over the updraft of the engine radiators; that proved to be the most ineffective way to go. It was only after I realized that shielding the set up from turbulence aided the effect that I began to see results. If nothing else, that shows that one must have almost a Sherlock-Holmes-like approach to this kind of research if it is to succeed. Also, that was probably the first plasma physics experiment ever performed on a moving train!

I now feel that there is much to be done in this area. The next step is to to perform the experiment using a more conventional setup: in a low velocity wind tunnel, using controlled arc discharges to form ball lightning. I believe that setup would be very productive.

While the mechanism that allows the confinement of the plasma is still unknown, now the probable nature of that mechanism is known, at least in part. The next task is to demonstrate the phenomenon over and over again. By doing that, the remaining questions will be answered and the true nature of ball lightning will be revealed. 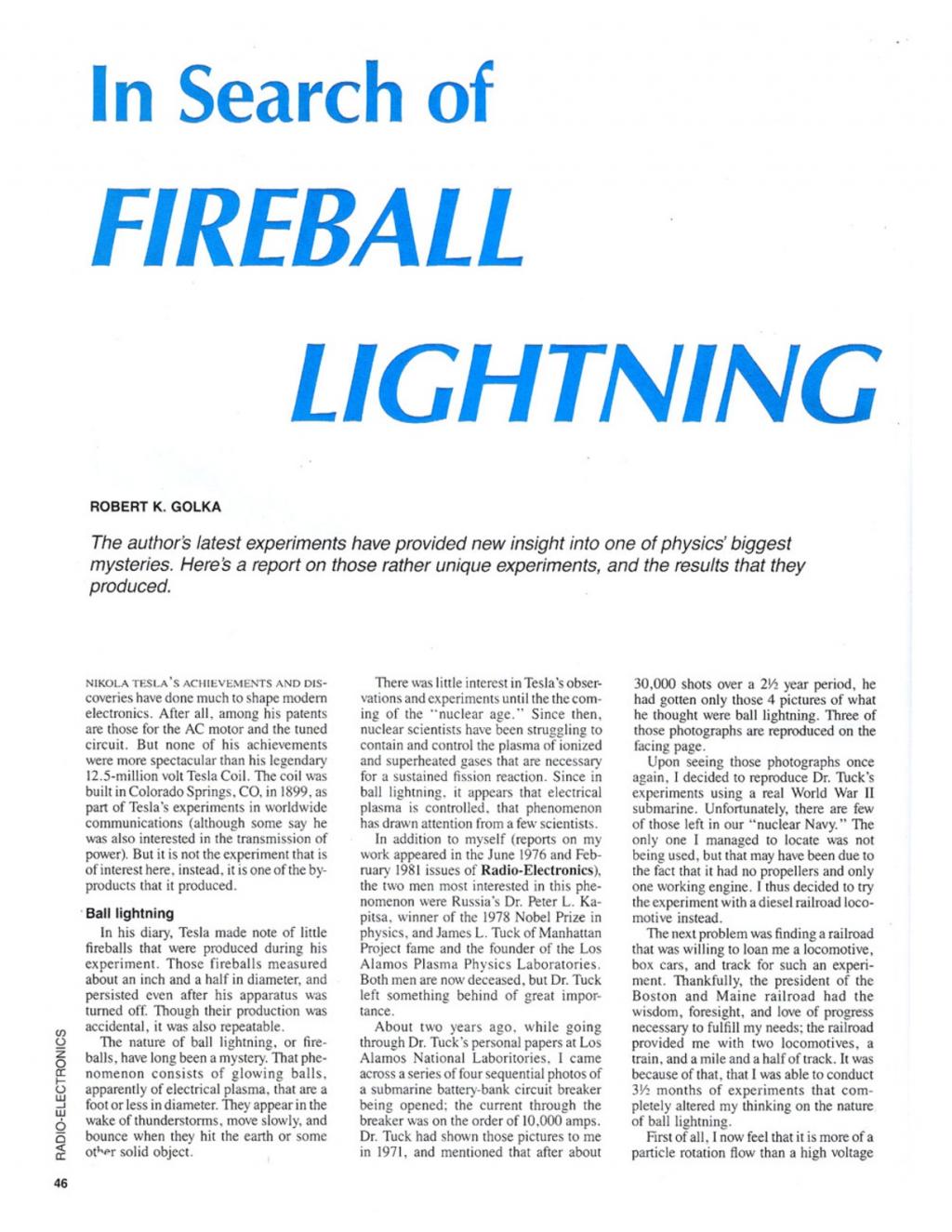