Bruns, a laser physicist with Hughes Aircraft Co. in Los Angeles, has allotted a big chunk of his spare time to pinpointing the location of Tesla's early day laboratory.

“I've been frustrated in my research efforts, however,” says Bruns, who would like the help of Gazette Telegraph readers in locating the site.

Tesla arrived here in May of 1889 and immediately set about designing the proposed laboratory to which special equipment would be shipped from New York. The weird barn-like structure was 100 feet long and 25 feet wide with a roof that sloped from the center and could be rolled back. A wooden pyramidal tower from below the center extended to a height of approximately 80 feet and served as an anchor for a 200-foot mast topped by a 3-foot copper ball connected by a wire to the laboratory's electrical apparatus. Giving due respect to local winds, Tesla braced the walls on three sides.

At on end of the laboratory was the secondary coil of a giant Tesla transformer which he called a “magnifying transmitter.” Its primary coil buried beneath the floor was 51 feet in diameter and wound with heavy copper bars.

The time came in mid-July to test the apparatus. Tesla chose to do this during the late evening hours when the demand on the local power company would be diminished.

Obsessed with electrifying the earth he signaled his assistant to close the switch, then jerk it quickly. To his relief, there was no short circuit in the laboratory. Instead, a Medusa-headed fire glowed around the secondary. There was a crackling, a sharp report from the huge copper ball.

Another try convinced Tesla that all was ready for the ultimate experiment - to prove the possibility of a world-wide wireless superpower electrical system.

Tesla walked outside to keep an eye on the copper ball. He looked thinner than usual in full evening attire and about 7 feet tall in his boots with the thick insulator soles as he again signaled his assistant to open the switch.

“The crackling and snap repeated and then came a tremendous upsurge of sound as the power built up,” wrote Inez Hunt and Wanetta Draper in their book “Lightning in His Hand.”

“There was a crescendo of vicious snaps from above. The noises became machine gun staccato, then roared to artillery intensity. Ghostly sparks danced a macabre routine all over the laboratory. There was a smell of sulphur that might be coming from hell itself. A weird blue light spread over the room. Flames began to jump from the ball at the top of the mast — first a few feet long — then longer and brighter, thicker, bluer.

“More emanations until they reached rod-like proportions thick as an arm and with a length of over 130 feet. The heavens reverberated with a terrific thunder that could be heard 15 miles over the ridge to Cripple Creek.”

Tesla was pumping electricity into the earth and drawing it out at the rate of 150,000 oscillations per second, which produced wave lengths of about 7,000 feet.

He built up tremendous surges of power until an electrical south pole to match his north pole here was formed at the opposite end of the earth — between the southwest corner of Australia and the southern tip of Africa. High frequency waves of great magnitude rose and fell in unison between the two, quickly proving that the earth is an electrically charged body with an extremely high potential, plus a mysterious ability to maintain its voltage.

Suddenly, according to Hunt and Draper, the inferno ceased with dramatic silence. Tesla had blown the facilities of the Colorado Springs Electric Company!

Bruns, who graduated from Mitchell High School in 1970, says that there are several reasons for his interest in finding the precise location of Tesla's mysterious looking laboratory.

“Also, my father (Arnold Bruns) built our house in 1963 on a vacant lot not more than a few feet from where I believe the lab was located. Thus, the issue has a personal interest for me.”

Bruns feels that it is “a shame” that the exact location of the laboratory is so uncertain because of the importance of Tesla's experiments, because a commemorative stamp has been proposed to honor the scientist and because a Tesla Museum in Colorado Springs has also been proposed.

“This important scientist built and operated his laboratory until 1900 near the present intersection of Foote Avenue and Kiowa Street,” says Bruns.

“After doing extensive research, I've come to the conclusion that the only remaining clues may be old photographs lying in some Gazette Telegraph reader's attic collection,” he says.

According to Bruns, the only known photographs of the laboratory were made by Tesla's assistant, as part of his scientific diary.

“In order to locate the lab accurately, not only must nearby landmarks be included in the background or foreground, but the location where the photo was taken must also be known,” he says.

Although not much existed in those pastures at that time, several of Tesla's own photos show Pikes Peak, the Colorado School for the Deaf and the Blind and the Union Printers Home.

“The location from which these photos were taken, however, is too uncertain to pinpoint the lab's location,” says Bruns. “Photographs taken from the Union Printers Home, for example, looking toward the D and B School, or vice versa, would be all that is required. A close-up picture would not be necessary; family pictures, taken casually, may have his distinctive looking building in the background, and if another structure, either man-made or natural is also included, this would be enough to locate the site.”

According to Bruns, the laboratory was dismantled to build a home some distance away in 1904, so there were five years when the opportunity was there to take a picture.

Bruns has attempted to find written or legal evidence of the precise location of Tesla's laboratory through a number of different routes.

“Old issues of the Colorado Springs Gazette have been examined for interviews with long-time residents, but unfortunately, memories can't be trusted,” he says. “The articles quote the different people as remembering the lab being placed anywhere from north of the D and B School to the intersection of Iowa Avenue and Union Boulevard.”

Bruns says that he also wrote to the grandson of the carpenter who built the laboratory, but that fellow couldn't recall the exact location.

“Researchers at Penrose Library were very anxious to help,” he says, “but a search of their photo archives and old maps was to no avail.”

The original owners, who rented the land to Tesla reported to Bruns that most of their early records were destroyed by a fire in the 1930s.

Bruns says that the case file of a lawsuit involving the property has been missing from the Denver Archives since 1905, when someone named Harmon checked it out and never returned it.

“In his notes, Tesla mentioned a water main 300 feet from his lab, but several mains went through the area at that time,” Bruns says.

He says that anyone with information or photographs that would help pinpoint the old laboratory site may contact his parents at 574-1235.

Bruns, who in 1967 built a miniature Tesla coil for a science fair, says that he is using modern electronics to make improvements over Tesla's coil.

“I'm going to write a paper on my new developments, which will be contained in a small version of the Tesla coil,” he says. “Other than that, the project is just for fun.”

From Colorado Springs, he says, Tesla returned to Long Island, N.Y. to build a giant transmitter.

“His goal was to build a master transmitter capable of providing everyone in the world with all the electrical power they needed,” says Bruns. “Even those in isolated places, would be able to receive adequate electricity without benefit of wires.”

Tesla proved that to tap the earth's energy for heating, for electrical appliances and for lighting, all anyone needed was a 20-foot antenna, a condenser plus a ground connection and a coil — the elements needed in a radio tuning unit.

Bruns admits that Tesla is on of his heroes.

“I find it interesting that we lived so close to where Tesla had his lab,” says Bruns, “It's like sleeping in the bedroom where George Washington slept.” 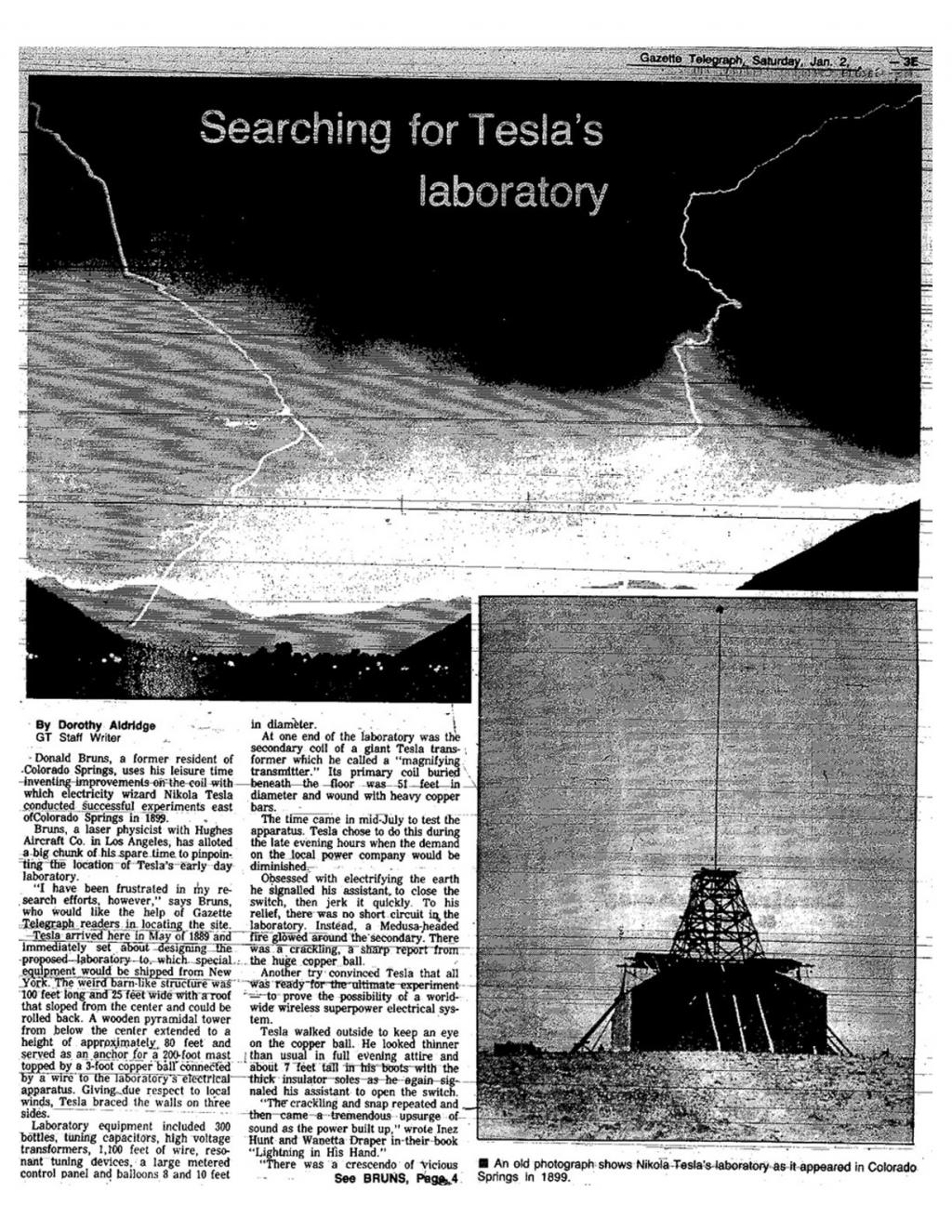