It was just 67 years ago Monday night when Leonard Curtis invited 20 prominent Colorado men, including Governor Thomas, to meet Nikola Tesla in the dining room of the El Paso Club. Details of that night were recreated this past Monday as the executive board of the Historical Society of the Pikes Peak Region sponsored a subscription dinner to honor the memory of Tesla, an inventor responsible for the alternating current.

Those invited were past presidents, local citizens having a class connection with Tesla, the members of the committee which had sponsored the historical marker being placed that afternoon at Memorial Park and representatives of the electrical industries.

Those who sat at the speaker's table were Dr. Richard Pearl, president of the Historical Society and master of ceremonies; Mrs. Pearl; Eugene Goodwin, after dinner speaker and representative of Westinghouse Electric Corporation; Sen. Paul Bradley, representative for Gov. John A. Love; Mrs. Bradley; Mayor Harry Hoth and Mrs. Hoth; Stuart Richter of the Park and Recreation Department of Colorado Springs; Mrs. Richter; Rev. Fr. Paul Fedec of the Eastern Orthodox Church who gave the invocation.

Among the out of town guests were Judge and Mrs. William S. Jackson of Denver; J. S. Wyble of Westinghouse in Denver: Kenneth Eklund of Westinghouse in St. Louis; James Springer, state president of IEEE; and Theodore Roesch, professional engineer of Denver and California.

Every detail was planned to recreate the atmosphere of the original Tesla dinner. Table decorations of red and while carnations were blended with white doves. Antique Manitou water bottles with corks and old labels describing curative powers of the contents were secured from the Manitou Beverage Company to duplicate the custom of serving Manitou water on all first class hotel tables in 1899.

Among those introduced were Julie Hoefer who lived at the Alta Vista Hotel in downtown Colorado Springs at the time Tesla lived there; Glen Jackson who delivered gold filings to the Tesla Laboratory; Mr. and Mrs. Eugene Utterback, both former employes of Westinghouse; and Reta Ridings who represented Colorado College. Mrs. Utterback remembered writing royalty checks for Tesla when she was with Westinghouse. 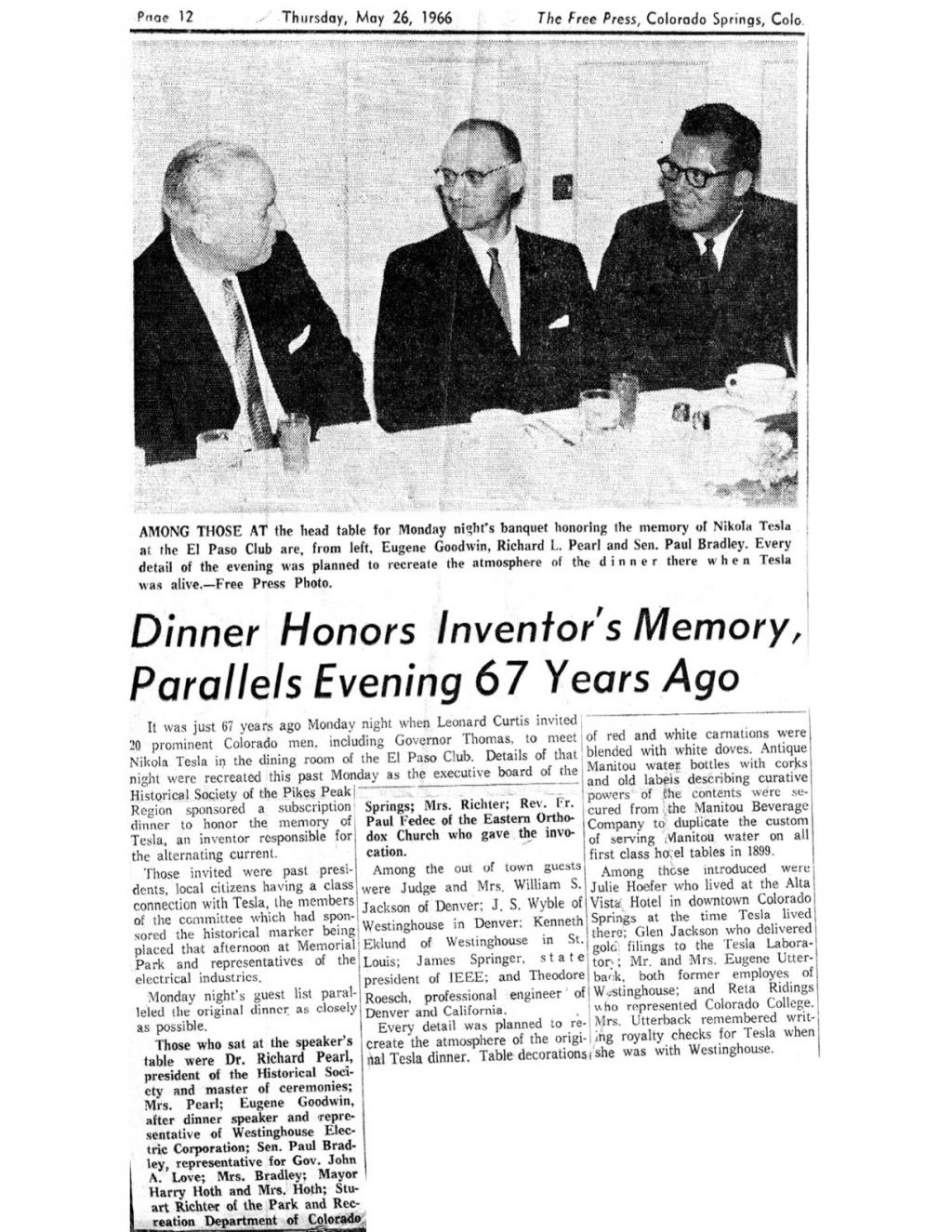