The clues were slim, but after several months of detective work the mystery was solved.

Where was the laboratory of Nikola Tesla, the genius scientist inventor who, in 1899, spent eight months working in Colorado Springs?

“All the evidence was nearly demolished,” said Glenn Kinnaman, a local historian who revealed the site for the first time publicly Friday at the Tesla Centennial Symposium being held at Colorado College.

Tesla invented alternating current, radio (although Marconi is widely credited with this, Tesla received the first patent), fluorescent lighting and numerous other devices.

Even today, scientists look to his research for their work on space-age weapons.

“He was about 150 years ahead of his time,” Kinnaman said.

While working in Colorado Springs, Tesla experimented with the production of man-made lightning bolts and with using the Earth itself to conduct electric power.

Kinnaman, along with Dr. James Watson, a Colorado Springs pediatrician, and Dr. Rastko Maglic, a physicist with Honeywell Inc. in the Springs, began last spring the difficult task of looking for clues to the lab's whereabouts.

“At first it was extremely frustrating, then it got rather hilarious,” Kinnaman said.

They were led on several wild goose chases by well-intentioned people who were convinced the lab was in Cripple Creek, Colorado City or in a park east of town.

“In the end, we had to go back to old photographs,” Kinnaman said.

Armed with a few photos of the large wooden structure Tesla used as a laboratory — including a most unusual and helpful time-release photo of the building in the moonlight — the detectives began scouting around for terrain that matched.

“You must be able to visualize what the country around here looked like back then,” Kinnaman said. “There was not a tree, not a bush, nothing by jack rabbits and rattlesnakes.”

By walking through likely parts of town and mentally removing all the buildings, they finally found a site where they are certain the lab once stood — the southwest corner of the intersection of Kiowa Street and Foote Avenue.

The home now occupying the site at 32 N. Foot Ave. was once owned and occupied by noted baseball pitcher Richard Gossage, now with the San Diego Padres.

The site has the same ridge seen in the photographs, Kinnaman said.

Tesla got his power for his experiments by stringing a power line between his laboratory and the streetcar lines on Pikes Peak Avenue, Kinnaman said.

“It was the ideal spot for him,” he added, “It was a high, open space. He didn't want any trees around for his experiments.” 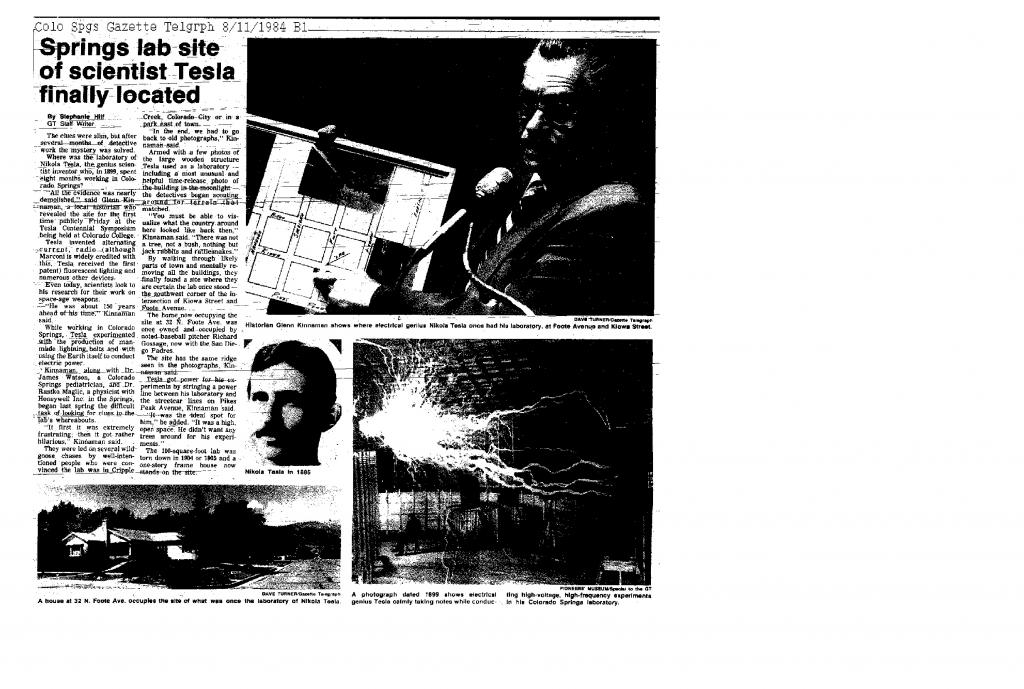