Subway Electric Traction - The Views of Mr. Tesla on the Subject Presented and Defended

To the Editor of The Sub - Sir: “My attention has been called to numerous comments on my letter, published in your issue of Nov. 1, and relating to the electrical equipment of the newly opened catacomb in this city. Some of them are based on erroneous assumptions, which it is necessary for me to correct.

“When I stated that my system was adopted, I did not mean that I originated every electrical appliance in the subway. For instance, the one which that ill-fated electrician was repairing when he was killed, two days after the catacomb was ready for public use, was not invented by me. Nor was that other device on the sidetracked car, which, as will be remembered, caused the burning of two men. I also must deny any connection with that switch or contrivance which was responsible for the premature death of a man immediately afterward, as well as with that other, which cut short the life of his unfortunate successor. None of these funeral devices, I emphatically state, or any of the other which brought on collisions, delays and various troubles and were instrumental in the loss of arms and legs of several victims, are of my invention, nor do they form, in my opinion, necessary appurtenances of an intelligently planned scheme for the propulsion of cars. Referring to these contrivances, it is significant to read in some journals of the 8th inst. that a small firm failed because their bid was too low. This is indicative of keen competition and sharp cutting of prices, and does not seem in keeping with the munificence claimed for the Interborough company.

“I merely intended to say in my letter that my system of power transmission with three-phase generators and synchronous motor converters was adopted in the subway, the same as on the elevated road. I devised it many years ago for the express purpose of meeting the varied wants of a general electrical distribution of light and power. It has been extensively introduced all over the world because of its great flexibility, and under such conditions of use has been found of great value. But the idea of employing in this great city’s main artery, in a case presenting such rigid requirements, this flexible system, offering innumerable chances for breakdowns, accidents and injuries to life and property, is altogether too absurd to dignify it with any serious comment. Here only my multiphase system, with induction motors and closed coil armatures — apparatus unfailing in its operation and minimizing the dangers of travel — should have been installed. Nothing, not even ignorance, will prevent its ultimate adoption; and the sooner the change is made the better it will be for all concerned. Personally, I have no financial or other interest in the matter, except that as a long resident of this city I would have been glad to see my inventions properly used to the advantage of the community. Under the circumstances I must forego this gratification.

“The consequences of the unpardonable mistake of the Interborough company are not confined to this first subway or even to this city. We are driven to travel underground. The elevated road is the eighth wonder, as colossal and imposing in the feature of public forbearance as the Pyramid of Cheops in its dimensions. Sooner or later all interurban railways must be transformed into subterranean. This will call for immense investments of capital, and if defective electrical apparatus is generally adopted the damage to life and property will be incalculable, not to speak of inconvenience to the public.

“It seems proper to me to acknowledge on this occasion the painstaking suggestions of some friends of mine, mostly unknown to me, both in the large domain of electrical achievement and in the small sphere of my friendship, to again address the American Institute. It is customary with scientific men to present an original subject only once. I have done so and do not desire to depart from this established precedent. A lecture on the defects of the subway offers great opportunities, but would not be original. In view of certain insinuations I may cite a recently published statement of Mr. C. F. Scott, formerly president of the American Institute: ‘As a matter of history it is the Tesla principle and the Tesla system which have been the directing factors in modern electrical engineering practice.’ There are but a few men whose acknowledgment of my own work I would quote. Mr. Scott is one of them, as the man whose co-operation was most efficient in bringing about the great industrial revolution through these inventions. But the suggestions of my good friends have fallen on fruitful ground, and should it be possible for me to spare time and energy I may ask the city authorities for power to investigate the subway, and make a sworn report to them on all the defects and deficiencies I may discover, in the interest of public welfare.

“A few more words in relation to the signs. With all due respect to general opinion, I entertain quite a different view on that subject. Advertising is a useful art, which is being lifted continually to a higher plane, and will soon be quite respectable. It should not be hampered, but rather encouraged. I would give the Interborough company every facility for exploiting it, restricting it only in so far as the artistic execution is concerned. A commission of capable men comprising a painter, a sculptor, an architect, a literary man, an engineer and an executive business man might be appointed, to pass upon the merits of the signs submitted for acceptance. I do not see why the public should object to them if they were regulated in this manner. They will further business, make travel less tedious, and help many skillful artisans. The subways are bound to become municipal property, and the city will then derive a revenue from them. What is most important for the safety of life and property, quickness and security of travel, should be first considered. All this depends on the electrical equipment. The engineers have built a good tunnel, and proper apparatus should be installed to match it. 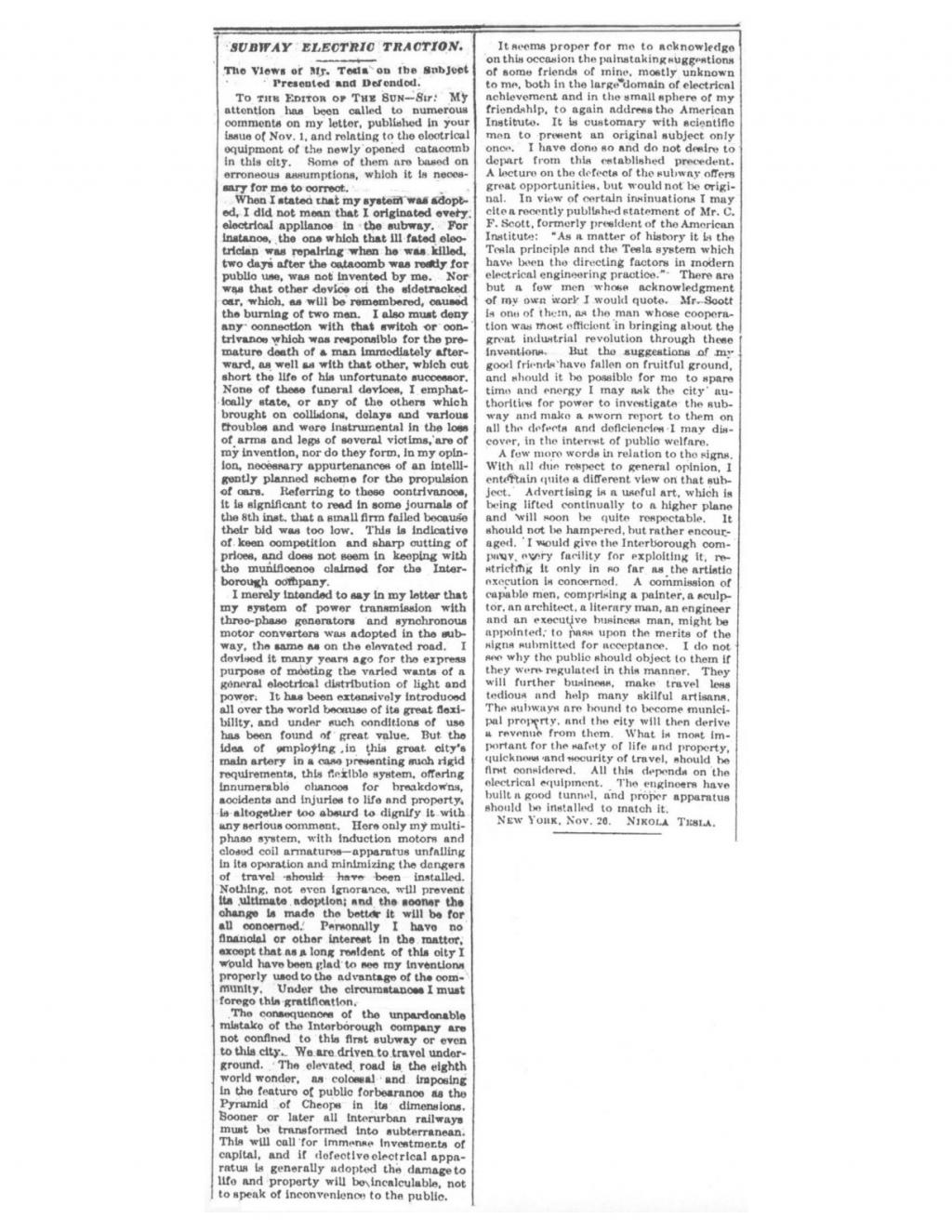