Some time ago Mr. Swinburne advanced certain views on transformers which have elicited some comment. In The Electrical Engineer of Sept. 10. there are brought out further arguments on behalf of his open circuit, or, as he calls it, “hedgehog” transformer, claiming for this type a higher average efficiency than is attainable with the closed circuit forms. In regard to this, I say with Goethe, “Die Botschaft hör’ ich wohl, allein mir fehlt der Glaube — I hear the message, but I lack belief.”

Many of Mr. Swinburne’s arguments are in my opinion erroneous. He says: “In calculating the efficiencies of transformers, the loss in the iron has generally been left completely out of account, and the loss in copper alone considered; hence, the efficiencies of 97 and 98 per cent. claimed for closed iron circuit forms.” This is a statement little complimentary to those who have made such estimates, and perhaps Mr. Swinburne would be very much embarrassed to cite names on behalf of his argument. He assumes the loss in the iron in the closed circuit forms to be 10 per cent. of the full load, and further “that in most stations the average use of lamps is less than two hours a day, including all lamps installed,” and arrives at some interesting figures in regard to efficiency. Mr. Swinburne seems not to be aware of the improvements made in the iron. The loss with the best quality of iron will, I believe, not reach 8 per cent. of the full load by an intelligent use of the transformer, and there is no doubt that further improvements will be made in that direction.

As regards the second part of his assumption, I think that it is exaggerated. It must be remembered that in most central stations or large plants due care is taken that the load is favorably distributed and in many cases the wiring is such that entire circuits may be shut off at certain hours so that there is during these hours no loss whatever in the transformers. ‘

In his “hedgehog” form of transformer Mr. Swinburne reduces the iron considerably and comes to the conclusion that even in small transformers the iron loss is under one per cent. of the full load, while in the closed circuit forms, it is, according to him, 10 per cent. It would strengthen this argument if the iron would be dispensed with altogether. Mr. Swinburne does not appreciate fully the disadvantages which the open circuit form, operated at the usual period, entails. In order that the loss in tire iron should be reduced to one-tenth, it is necessary to reduce the weight of the iron core to one-tenth and subject every unit length of the same to the same magneto-motive force. If a higher magneto-motive force is used the loss in the core will — within certain limits, at least — be proportionate to the square of tire magneto-motive force. The remark of Mr. Swinburne, “If the iron circuit is opened, the aides of the embracing core can be removed, so the loss by hysteresis is divided by three,” is therefore not true; the loss will be divided by 3 * F2 / F1² – where F1>F. If the iron of the open circuit form is made up in a closed ring the advantage will be at once apparent, for, since the magnetic resistance will be much reduced, the magneto-motive force required will be correspondingly smaller. It is probable that, say, four Swinburne transformers may be joined in such a way as to form a closed magnetic circuit. In this case the amount of iron and copper would remain the same, but an advantage will be gained as as the total magnetic resistance will be diminished. The four transformers will now demand less excitation and since — under otherwise equal conditions — the gain depends on the square of the existing current, it in by no means insignificant. From the above comparison it is evident that the core of such open circuit transformer should be very short, by far shorter than it appears from the cut in The Electrical Engineer.

Mr. Swinburne is in error as to the motives which have caused the tendency to shorten the magnetic circuit in closed circuit transformers. It was principally on account of practical considerations and not to reduce the magnetic resistance, which has little to do with efficiency. If a ring be made of, say, 10 centimeters mean length and 10 square centimeters cross section, .and if it be wound all over with the primary and secondary wires, it will be found that it will give the best result with a certain number of alternations. If, now, a ring is made of the same quality of iron but having, say, 20 centimeters mean length and 10 square centimeters section it will give again the best result with the same number of alternations, and the efficiency will be the same as before, provided that the ring is wound all over with the primary and secondary wires. The space inside of the ring will, in the second case, be increased in proportion to the square of the diameter, and there will be no difficulty in winding on it all the wire required. So the length may be indefinitely increased and a transformer of any capacity made, as long as the ring is completely covered by the primary and secondary wires.

If the wires be wound side by side the ring of smaller diameter will give a better result, and the same will be the case if a certain fraction of the ring is not covered by the wires. It then becomes important to shorten the magnetic circuit. But, since in practice it is necessary to enclose the transformer in a casting, if such a ring be trade, it would have to be protected with a layer of laminated iron, which would increase the cost and loss. It may be inclosed in jars of some, insulating material, as Mr. Swinburne does, belt this is less practicable.

Owing to this, the constructors of the most practical forms, such, for instance, as the Westinghouse transformer, to which the Swinburne reasoning applies, have been prompted to enclose the wires as much as possible with the laminated iron, and then it became important to shorted the magnetic circuit, because in this form only a part of the magnetic circuit is surrounded by the wires, as well as for other practical considerations.

In practice it is desirable to get along with the least length of copper conductor on account of cheapness and regulation. Mr. Swinburne states that in his transformer the loss in iron is under one per cent. of the full load; all the balance of loss must, therefore, be in the copper. But since, according to him, the wires are of larger section, his transformer can hardly be an improvement in that direction. The gun-metal casting is also objectionable. There is no doubt some loss going on in the came, and beside, it increases the resistance of the wires by a factor √ S / S1 where S is the total cross-section of the core and S1 the section of the iron wires. There is one important point which seems to have escaped Mr. Swinburne’s attention. Whether the open circuit transformer is an improvement, or not, will depend principally on the period. The experience of most electrical engineers has resulted in the adoption of the closed.circuit transformer. I believe that I was the first to advocate in open circuit form, but to improve its efficiency I had to use a much higher period; at usual periods the, closed circuit form is preferable.

Mr. Swinburne makes some other obscure statements upon which I need not dwell, as they have no bearing on the main question. 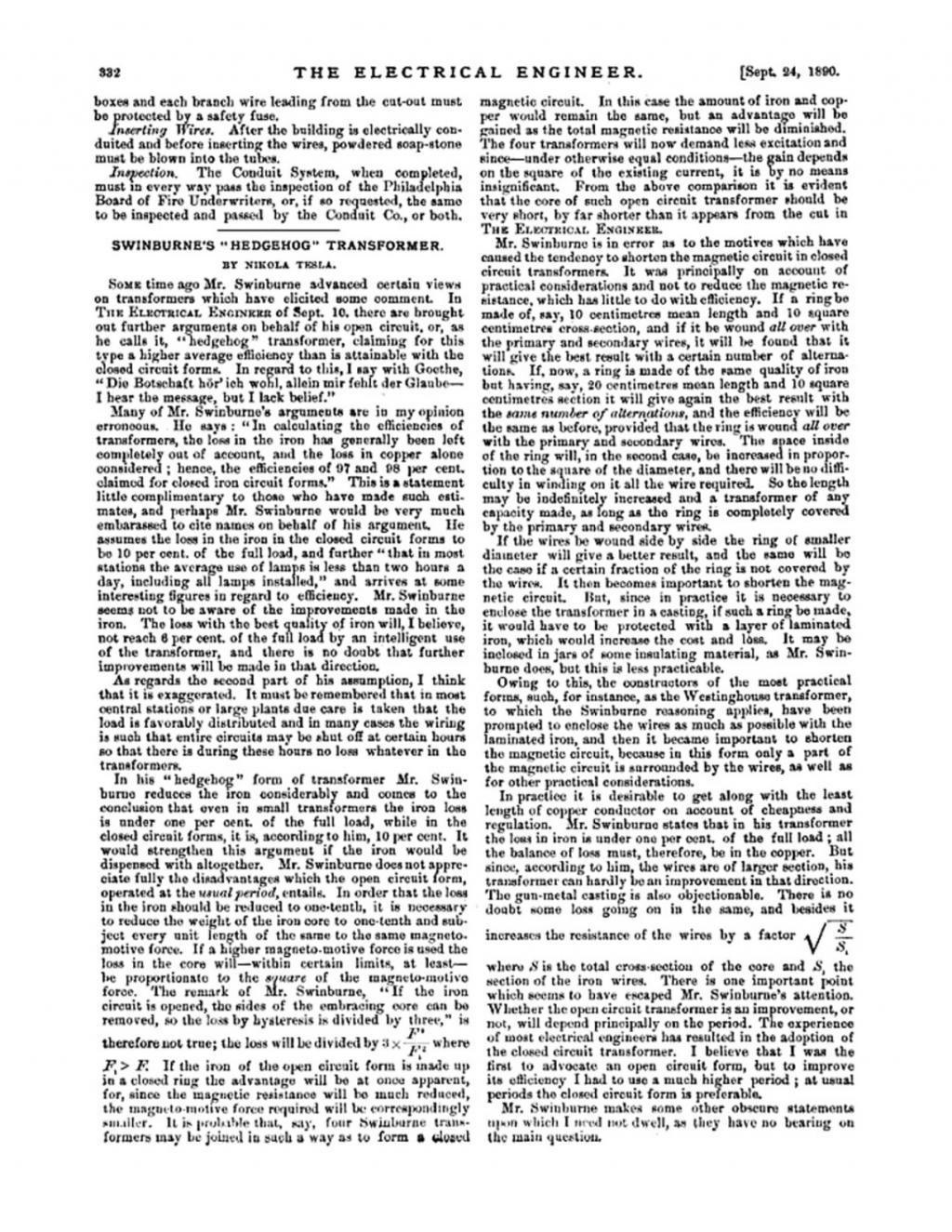