The Wednesday evening session of the American Institute of Electrical Engineers was held in Prof. Dwight’s room, Columbia College, and will long be remembered by those present, not only on account of the brilliant experiments shown, but also for the many possibilities which it suggested in the development of the artificial illumination of the future. For the purpose of his experiments, Mr. Tesla employed the alternating machine with 384 poles, described in The Electrical Engineer of March 18, 1891, which, when run at full speed, permitted him to obtain 20,000 alternations per second. The currents of this machine in all of Mr, Tesla’s experiments were first run through a condenser in order to avoid the possibility of injury to the machine. The machine itself was set up in the electrical workshop of the college and was driven by an electric motor, the speed of which could be varied by a switch on the lecture platform.

Mr. Tesla introduced his subject by the remark that modern science has been able to make rapid strides by the recognition of ether as the medium of transmission of vibrations of various forms which manifest themselves to our senses. We are therefore now able to see things in a different light than was formerly the case, and, being tolerably well able to explain them, the truth cannot be hidden much longer. The answer to the question, “What is Electricity?” we were not yet prepared to give. We were justified in assuming, however, that electric phenomena are ether phenomena, and we may consider the phenomena of static electricity as phenomena of ether under strain, and those of dynamic electricity and electro-magnetism as phenomena of ether in motion.

Mr. Tesla, while expressing the highest consideration for the work of Dr. Lodge, was not in entire accord with the views advanced by him, which he considered to be more of the nature of ingenious explanations than of a probable theory, Mr. Tesla contending that there can be no two electricities.

Alluding further to the electro-magnetic theory of light, and to the Hertz experiments and those of Dr. Lodge and their application to the production of an efficient source of light, Mr. Tesla considered the electromagnetic waves as unavailable for the production of luminous effects, for the reason that long before we could reach the necessary frequency the conductor would become opaque to the passage of the waves. Mr. Tesla thought that electro-magnetic waves, unless they have the frequency of true light waves, cannot produce luminous effects. Not so, however, with the electrostatic waves or thrusts. These, no matter what their frequency, can excite luminous radiation. He reasoned that the static effects in the Hertz and Lodge experiments were excessively small, due to the fact that they were produced in a practically closed coil, the spark acting as a bridge, making the coil practically continuous and depressing the potential. To obtain the desired difference of potential we must work with an open circuit generator of high potential of high frequency to enhance the electrostatic effects, and it was the recognition of this fact which led Mr. Tesla to the results he showed.

In carrying out this idea of obtaining enormous differences of potential, Mr. Tesla at once encountered the difficulty of obtaining the requisite insulation for the induction coil employed by him. His experience demonstrated that what we consider the best insulators, such as glass and rubber are inferior to others, not formerly so considered, such as oil and wax. Mr. Tesla then started a spark coil in action, the primary of which was in connection with his alternator which was speeded to give from 10,000 to 11,000 alternations per second. The coil emitted a clear note, which rose as the number of alternations was increased. As the discharges took place between the terminals of the coil, an exhausted Geissler tube held in proximity to the discharge did not light, but upon blowing out the arc the tube lighted up, which was due to the rise of potential caused by the rupture of the arc. This effect Mr. Tesla considered as purely electrostatic.

Mr. Tesla then showed the influence of insulated bodies having considerable size upon the spark length, demonstrating the effect of capacity upon the nature of the discharge. Thus when we attach an insulated body to the terminal of the coil, the potential may be raised or lowered. He showed this by wrapping an insulated wire of about one foot in length about one terminal of the coil, and touching the other terminal with a brass sphere held in the hand; under these conditions streams of light emanated from all sides of the wire. When the sphere was removed, however, the streams disappeared almost entirely. He then cut off the wire in successive lengths, and the stream discharges became more marked and brilliant. He then attached a fine platinum wire to the terminal, which also showed the streams to a remarkable degree, and kept up a continuous vibration to and fro. He also showed a pinwheel effect, the wheel being rapidly rotated with streams issuing from the two points. Another experiment consisted in attaching two spheres of about four inches diameter to the terminals. The spark passes first between the two points nearest to each other on the spheres, then works up toward their tops, is extinguished and is re-established at the first point, this being continuously repeated. The neighboring exhausted tubes and lamps were illuminated and extinguished in unison with the action of the spark between the spheres. These Mr. Tesla pointed out were not electro-magnetic vibrations like the Hertz waves. He showed how by the use of the dielectric the spark is induced to jump between the separated spheres, due to the increase in the specific inductive capacity of the medium, and he also demonstrated that the streaming discharge passed easily through thick glass plates, rubber plates and a book. Mr. Tesla then showed these static effects in a non-striking vacuum. A tube of this nature when connected to the machine glowed brightly, and the terminals became incandescent. Mr. Tesla then remarked that if, instead of using a filament in a lamp - which necessarily limited us in the degree of incandescence which we could practically employ, - we could employ solid blocks of carbon, much higher efficiency could be obtained. Based upon this reasoning, he had constructed a lamp which he showed, containing two blocks of carbon in a non-striking vacuum. When connecting these two carbons to the two terminals of the coil or one to one terminal and the other to a body of some size, the blocks can be raised to high incandescence.

Mr. Tesla also showed a lamp with but a single rod filament in a non-striking vacuum with no outward connection. The energy is entirely transferred by condenser action through the medium of condenser coatings in the base of the lamp. He also pointed out how the brilliancy of the lamp could be varied by simply altering the relative positions of the condenser coatings. This Mr. Tesla followed by demonstration of the phenomena with an unexhausted globe, and a single filament mounted therein. The filament when connected to one terminal of the coil heats up to bright incandescence and spins around in the globe. He also demonstrated the heating by the use of Crookes’ well-known apparatus consisting of mica vanes mounted above a platinum wire, which was brought to incandescence by connection with one terminal of the coil, and rotated the mica vanes.

In order to still further verify the conclusions that the electrostatic effects are alone active, Mr. Tesla placed a Geissler tube at right angles to the coil and at its centre. In this position the tube did not light up. When placed at the ends, however, the tube lit up brilliantly and gave sufficient light to read by. Mr. Tesla showed both uranium and yttria tubes.

He then showed how exhausted tubes could be made to glow in an electrostatic field. For this purpose two large sheets of zinc were connected to the terminals of the machine at a distance of about 15 feet apart. The tube when placed between these sheets glowed brilliantly and could be moved about freely. Mr. Tesla remarked that, by merely creating such a field in a room, the mere suspension of the tubes in the room would afford the desired illumination.

Coming to the physiological effects, Mr. Tesla adjusted the conditions so that by touching one terminal with a brass sphere he raised the potential of the coil so enormously that a stream of light came out on the other terminal, and he estimated the difference of potential to be nearly 250,000 volts, and then performed the remarkable experiment of receiving the total discharge through his body, protecting his hands from burning by the brass balls held in his hands.

He then lit up lamps by holding them in contact with one terminal or near to the coil.

The lecturer then came to another class of experiments. He stated that he had used a system of conversion from high tension to low with the enormous frequencies of the condenser discharges. Mr. Tesla then showed an interesting experiment which consisted in passing the converted currents, produced in the manner just described, through a copper bar ⅜ inch in diameter and bent into a loop. Ordinarily such a bar would constitute a short circuit, but Mr. Tesla succeeded in bringing lamps stretched across the parallel sides of the bar to incandescence, demonstrating that the impedance in the loop connecting the two sides was so great as to practically prevent the current from passing through it and hence acting upon the lamps in the manner described. He also pointed out the existence of modes on the bar. His method consists in continuously charging and disruptively discharging a condenser into the working circuit, the charging of the condenser being effected by a coil operated either by alternating or direct currents. By this means any desired higher frequency may be obtained from any lower frequency.

Mr. Tesla concluded his experiments by exhibiting in action a simple alternate current arc lamp, operated by currents direct from the machine giving 20,000 alternations per second. The light was beautifully steady and the arc entirely free from the hum accompanying arcs operated with currents of low frequency.

We have given but the merest outline of the many beautiful and highly suggestive experiments made by Mr. Tesla. Notwithstanding the fact that Mr. Tesla excited the intensest interest of his audience for three hours, he was nevertheless unable, for lack of time, to bring before them many experiments, some of which, he said, wore even of a more striking nature than those brought out. 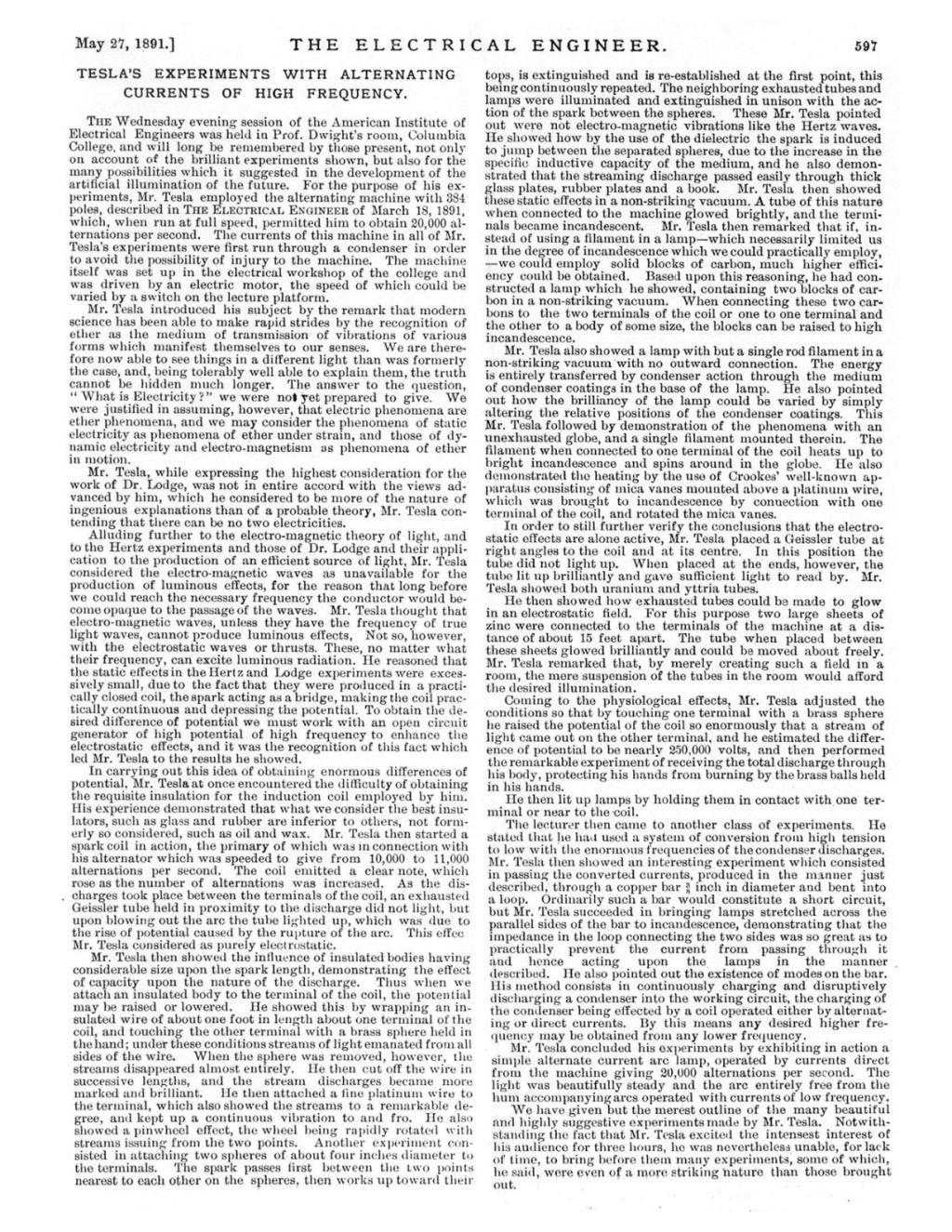