Scoffs at Normandie ‘Speed,’ Sees Success for His Plan to Use Stratosphere Ray

Would Light Sea at Night

Dr. Nikola Tesla, scientist and seer whose discoveries in the fields of polyphase electrical current and wireless place him in the front rank or modern inventors, refused yesterday to be awed by the record speed achievement of the French liner Normandie in crossing the Atlantic in 4 days 11 hours 42 minutes and predicted that enormous ships would cross the ocean at far greater speeds by means of a high-tension current projected from power plants on shore to vessels at sea through the upper reaches of the atmosphere.

In his room at the Hotel New Yorker, dressed in a blue bathrobe, blue socks and red slippers, Dr. Tesla expounded the principles of his fabulous method of power transmission — a method which he has been developing at irregular intervals from as far back as 1897. The virtues of stratosphere transmission, he said, lay not only in its potential increase of a vessel's speed but also in its power to eliminate the dangers of nocturnal navigation.

In short, high-tension currents of electrIcIty passing through the stratosphere would lIght the sky and to a degree turn night into day. With power plants stationed at IntermedIate posts such as upon the Azores and Bermuda, vessels could cross the Atlantic, propelled and safeguarded at the same time by electricity generated ashore. There would no longer be danger of boiler explosions nor hazards of collisions at sea. Even on moonless, cloudy nights, there still would gleam overhead the faint rays of surging electrIcal currents, so strong that pilots would be able to distinguish objects miles away.

Dr. Tesla, a tall, slender man with straight silvery hair, lean features and bright blue eyes that belie his seventy-eight years, prefaced his prophecies by poInting out that the Normandie's system of power generation and application was not new — but one which had been adopted long ago in some of the United States cruisers. The principle is one of his own invention.

“In many respects the machinery installed on the United States cruisers by former Secretary Josephus Daniels is more remarkable than that in the Normandie on account or the limitations of available space. Moreover, while the Normandie develops only 160,000 horsepower, the cruisers each develop 185,000 horsepower. These cruisers employ the most remarkable engine plants in the world, and I believe that this drive would not have been employed on the Normandie had it not been for the pioneering work done in the United States.

“In view of the adoption on such a large scale of these inventions of mine, it is interesting to recall that I was violently attacked only a few years ago by a professor of marine engineering at Columbia, who claimed the electrical drive was not feasible and that it was a folly to undertake it.

“However splendid the machinery in the Normandie might be, the time is not distant when we will have much simpler and better means of propulsion.”

Cites His Force Beam as One Way

Here Dr. Tesla recalled the possibilities of his force beam of particles which he announced last year as a potential defensive weapon of great value. One of its aspects is a death ray capable of destroying airplanes and armies. Another is a means of power transmissIon which could be used to relay immense voltages of power over distances limited only by the curvature of the earth.

The difficulties inherent in using this method as a means of propulsion for oceangoing ships, however, were seen by Dr. Tesla to lie in the necessity of vast outlays of capital and concerted harmonious endeavor by the chief nations of the world. The latter, he said, would be impossIble to achieve at the present time. A third difficulty would be the task of keeping a ship at sea constantly in touch with a threadlike beam of particles from ashore.

Dr. Tesla, therefore, suggested that his other scheme, of stratosphere transmission of electricity, would be a far more feasible means of marine propulsion. The principles of the two plans are entirely distinct. The force beam is a thin barrage of tiny particles discharged at tremendous velocIties from a kind of electrical gun. The other Invention, which he has not hitherto discussed publicly, is of transmitting high tension currents through the upper air, and receiving them by means of a vertical ionizing beam which would be a sort of invisible electrode. He discussed this yesterday:

“There is a method of conveying great power to shIps at sea which would be able to propel them across oceans at high speed. This method I conceived between 1897 and 1899, and in Colorado SprIngs in 1899 I made experiments along this line on a large scale.

“The principle is this: A ray of great ionizing power is used to give to the atmosphere great powers of conduction. A high tension current of 10,000,000 to 12,000,000 volts is then passed along this ray to the upper strata of the air, which strata can be broken down very readily and will conduct electricity very well.

“A ship would have to have equipment for producing a similar ionizing ray. The current which has passed through the stratosphere will strike this ray, travel down it and pass into the engInes which propel the ship.

“I will confess that I was disappointed when I first made tests along this line on a large scale. They did not yield practical results. At the time I used about 8,000,000 to 12,000,000 volts of electricity. As a source of ionizing rays I employed a powerful arc reflected up into the sky. At the time I was trying only to connect a high tension current and the upper strata of the air, because my pet scheme for years has been to light the ocean at night.

“However, since 1902 I have made many improvements in my method which I know now will assure success. A power plant upon the Azores, for instance, could send a current up into the stratosphere and illuminate the sky sufficiently for pilots to discern objects upon the ocean at a safe dIstance,”

Dr. Tesla said that he was working constantly every day to perfect his force beam, his method of stratosphere transmission of power, and a number of other inventions the nature of which he was not ready to disclose. When it was called to his attention that he was working pretty hard for a man who would be seventy-nine years old next month, he replied: 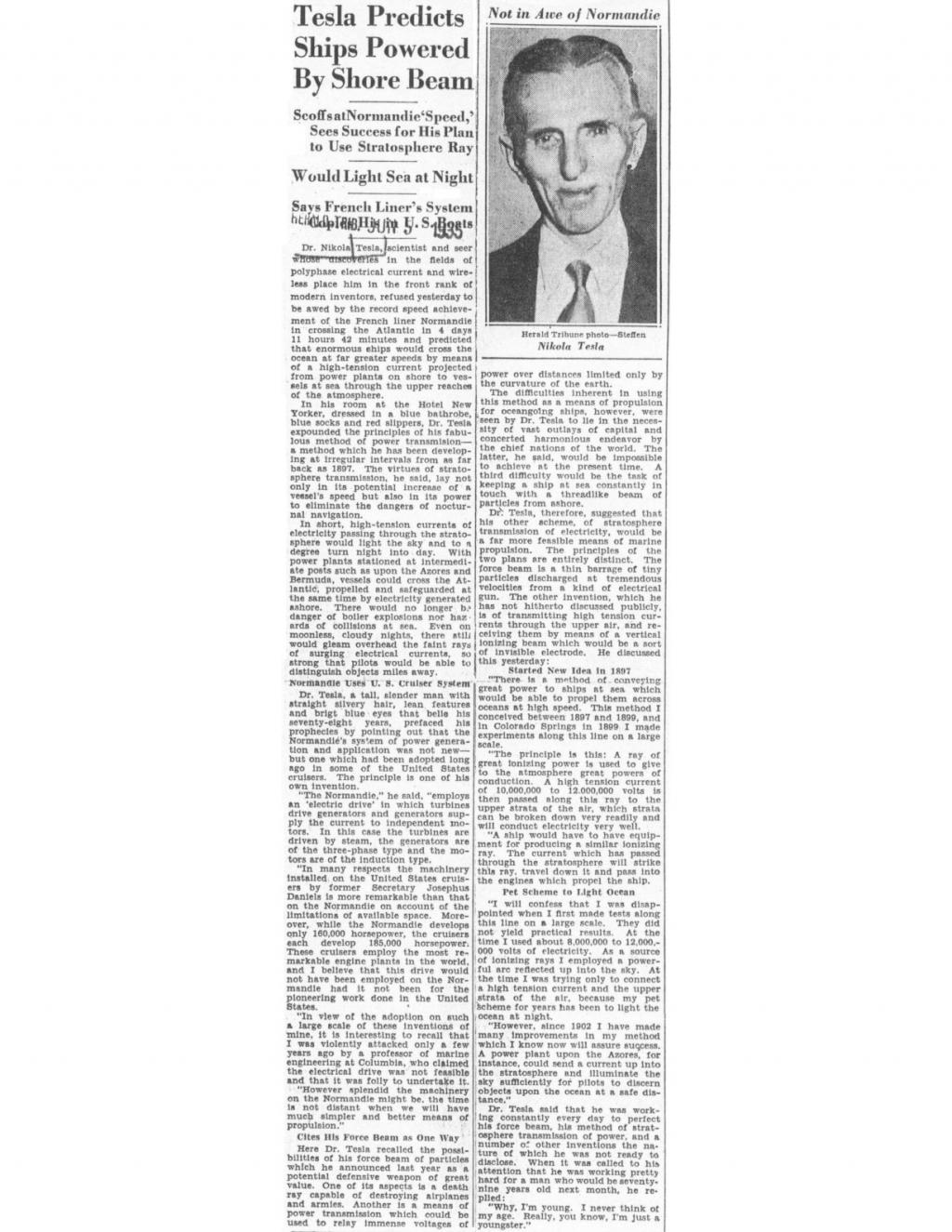