Foresees It Running Airplanes and Providing Light for Explorers.

Power transmission by wireless soon will give the world undreamed of marvels in transportation and comfort, Nikola Tesla, the Jules Verne of modern science, predicted today in an interview with the United Press.

Airplanes, freed of the weight and limitations of combustion motors, will soar with unlimited cruising radii high above the Atlantic and Pacific on power supplied by a shore plant.

Whole continents will be lighted at night by a man-made aurora borealis. Oceans will be similarly illuminated.

Explorers hibernating in snow-covered shacks at the south pole, mountaineers scaling virgin peaks, ivory traders penetrating Africa's jungles will carry portable apparatus by which they will "tune in" power, emanating thousands of miles away, to light their lamps.

“I may not see these things while I am alive,” Tesla said, “but there will be plenty to carry out these undertakings. That I shall not see them is a minor consideration. Contemporary success has very little attraction for me.”

It is not a lack of technical development that prevents these wonders from being accomplished now, Tesla said, but only his financial inability to carry them through himself.

“I have spent my life to perfect a system to transmit energy,” he said. “I have perfected an entirely new principle in power transmission. My device is capable of transmitting energy, practically without loss, to any distance whatsoever.

“You think I cannot launch this enterprise? I tell you I would have no difficulty, even in the depression. Several syndicates are mine to command. But they want to sell stock to the public. To this I would never consent.

“My attitude is very foolish, I realize, because I am convinced that nothing great can be accomplished without the help of the public. But if I do apply my principle of power transmission I shall do it myself. It is too far ahead just now, and there are too many doubters around.”

Tall, thin and austere, Tesla is an imposing figure as he approaches 77 years of age. He works daily at independent research, not connected with any of the "syndicates because I never could invent anything in factories; I couldn't concentrate and concentration is the only way to accomplish anything."

When asked by telephone for an interview, Tesla said he would meet the reporter at the Public Library.

“But will we be able to talk there?” he was asked.

He wore a black suit, black topcoat, black derby and carried a cane. He glanced around the spacious lobby for a place to sit. He selected a marble bench on the first landing of the stairway. A bum who had drifted in off the street was at one end of the bench, asleep or drunk. A man on another bench nearby put aside his Hebrew newspaper and listened in amazement as Tesla talked earnestly. 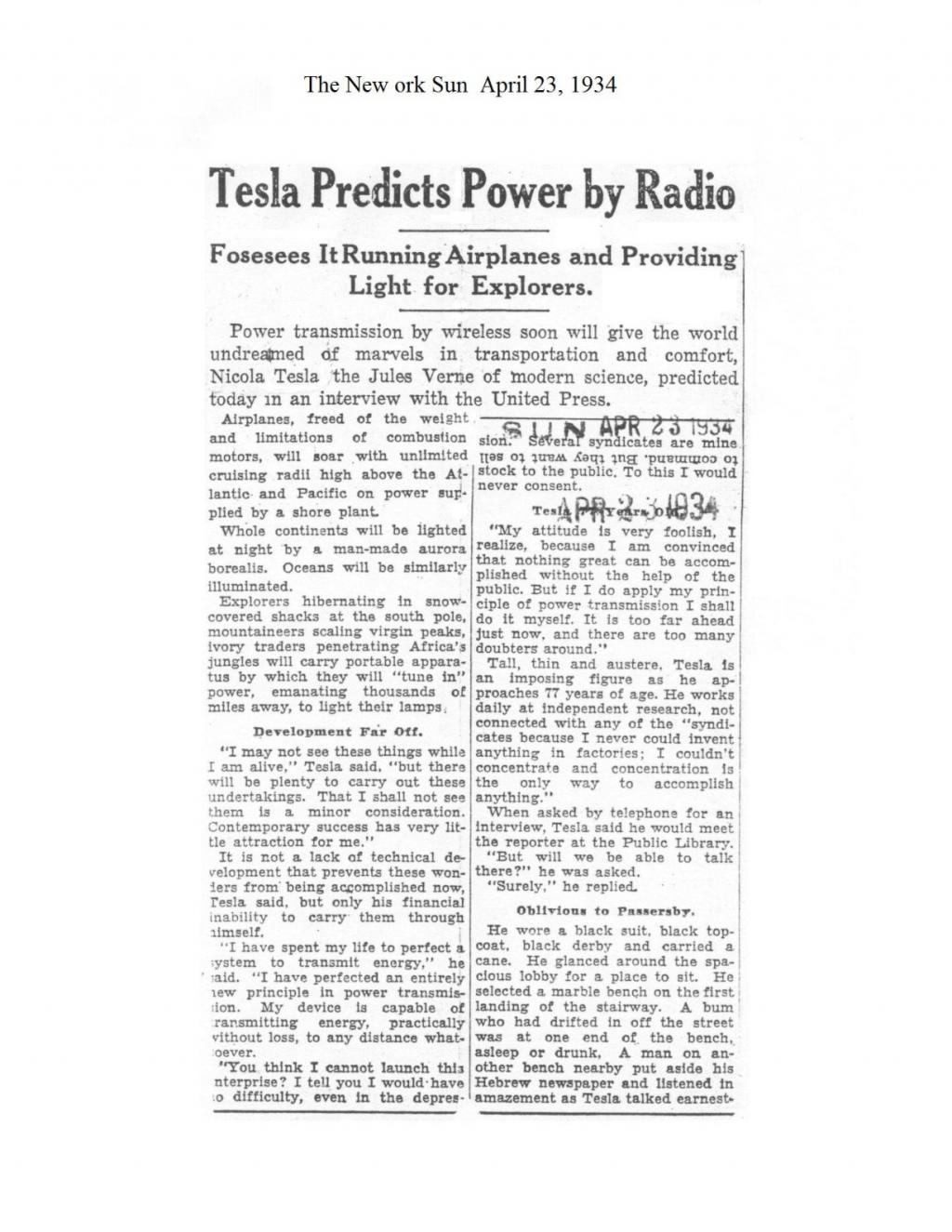