The Tesla System of Distribution and Electric Motors for Alternating Currents

Six patents, says the Electrical Review of New York, were issued last week under date of May 1st to Nickola [sic] Tesla, involving the various features of his very remarkable system of distribution and transmission of power by alternating currents, which are at the same time adapted for the production of light. The system is based upon a novel principle, which is very clearly set forth in the claim of one of the patents — namely, producing a continuously progressive rotation of the polarities of either or both elements (the armature or field magnet or magnet) of a motor, by developing alternating currents in independent circuits, including the magnetizing coils of either or both elements; and as a modification of this, shifting the poles of one element by alternating currents while magnetizing the other element by direct or continuous current.

One of the most interesting forms shows a generator of alternating currents whose armature contains two independent circuits of varying phase, and these two circuits are connected with the field-magnet coils of the motor in such manner that the alternating impulses in these two circuits will produce a continuous rotary shifting of the poles of the field-magnet and communicate a rotary effort to the armature, which in itself is a body of iron with coils of wire, whose circuit is entirely closed. That is, there is no communication whatever of the armature circuit with any other circuit, and consequently there is no commutator, collector, or brushes of any kind carried by the armature. It will thus be seen that there is here developed a curious and interesting phase in the construction and operation of electric motors, and one which is entirely novel, in that there is no portion of the entire motor subject to wear and tear in even the slightest degree, except the shaft and its bearings. The direct consequence of this in the commercial use of motors is of great importance, as the attendant having charge of an electric motor of this character would have no more responsibility than he would have in looking after the lubrication of a counter-shaft.

Another interesting feature is the result of perfect synchronism between the motor and generator which arises from the peculiar principle of operation of the motor, and the latter can be constructed to run at a predetermined speed provided the speed of the generator and that of the motor have a common divisor. The practical result of this is perfectly constant speed in the motor with constant potential supply, no matter how much the load may vary on the motor. The motor when running at its highest attainable speed reverses almost instantaneously, on a reversal of the line connections, so that the simple motion of the switch effects the instantaneous reversal of the direction, and the time occupied in changing from highest speed in one direction to highest speed in the opposite direction is but a fraction of a second. The rotary effort of the armature is very great, and there is no difficulty whatever attendant upon the starting of the motor under load. The efficiency is extremely high, and can be increased to the highest possible extent attainable by continuous current motors.

The system also takes with it the novel construction and operation of transformers, a simple form of which is illustrated by Fig. 2, which shows a closed magnetic circuit wound with four primary coils which are connected into two high-tension circuits in such manner as to produce two consequent poles at opposite ends of a diameter, and these by the action of the generated current in the high-tension circuits progressively shifting around the magnetic circuit, carrying the consequent poles continuously around; in other words, the two consequent poles rotate continuously, the winding, of course, remaining stationary. The secondary coils are wound on the primaries, and can be connected among themselves in any desired manner, according to the work to be performed.

It will be observed, therefore, that the action of the alternating currents is not to reverse polarities of the core, but to simply rotate them by the peculiar action of the current impulses in the two primary circuits, and it seems to follow, as a matter of course, that there is less energy wasted in the conversion than occurs in the ordinary converter, where the magnetic poles are alternately reversed. Instead of using four wires from the generator three can be used, and one of the three forming a common return for the other two.

Altogether, Mr. Tesla is to be congratulated, not alone on having produced something entirely novel in the electrical world, but also for having made thoroughly practicable the utilization of alternate currents for the transmission of power. The motors for a given output of mechanical energy are extremely small, and are, as stated, absolutely self-regulating, and there is no electrical element of wear and tear connected with them in any manner whatever, and this feature alone of the closed circuit armature without external connections stamps the series of inventions as being something entirely new and original, and it looks as though the new principle would have great influence on the application of alternating currents to practical forms of electric motors, and we congratulate Mr. Tesla upon his success in this direction. 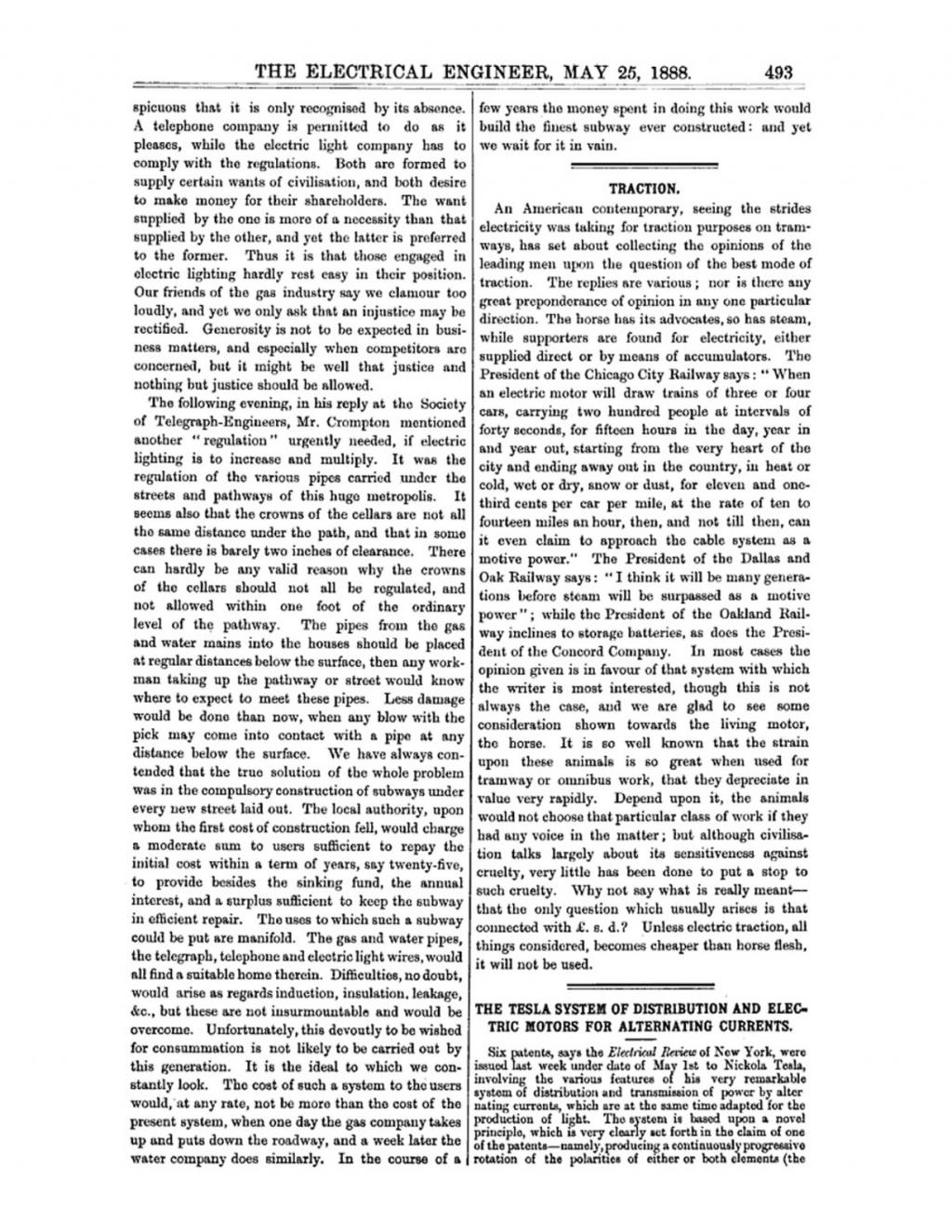