By Edward Marshall.
Thomas A. Edison, in one of these interviews, made a suggestion which will revolutionize the naval history of the United States. Already it has resulted in the appointment of a wonderful civilian consulting board.

Now comes Nikola Tesla with another plan which may revolutionize the nation's system of communication.

I went to him, the world's greatest expert, to learn what wireless had accomplished in this war and what of peculiar benefit to this country it might accomplish in the future. I was astonished by the richness of the field of thought info which the queries led.

He believes that wireless transmission might be adapted, without great expense, so that it would decrease the outlay for our defense and, at the same time, immensely increase the efficiency of our means of protection against invasion.

He also holds that by the same network of Government-owned radio stations which would be required for this task we might so decrease the cost of the dissemination of useful information that every citizen of this country, resident no matter how remotely from the populated centres, could be kept continually in touch with the outer world occurrences, weather prospects, and all that helpful information which the Government already gathers, or might gather if it had at hand the means by which to make it public.

Indeed, he thinks that the impetus toward practical and rapid development which this war has given radio communication may result in the solution of some of the greatest problems confronting humanity, and announces as a fact that simple scientific application of the knowledge already at hand well may produce at slight cost electrical power wherever needed and for whatever purpose, from the electric operation of machines in factories to that of the farmers' plows.

“Is it not the fact that even in the present war the wireless telegraph has proved of immense value?” I asked the world-famous electrical inventor.

“This new and revolutionary method of flashing energy through space,” he answered, “although, as yet, not much more than inaugurated, has profoundly modified methods of warfare, and, in both the constructive and destructive sense, has proved itself to be a factor of such potency that it must be reckoned with in all future naval and military operations.”

“It has made surprises impossible, for instance, and that undoubtedly is one of the reasons why no decisive battle has been fought, so far, upon land or sea. To what degree this has been instrumental in saving human life, human effort and treasure, cannot be estimated.”

“What are your ideas, in general, about government control of wireless?” I inquired.

“The mere fact that wonders can be achieved through the application of this subtle agent,” Mr. Tesla answered, “makes some kind, of governmental supervision of all wireless operations imperative, not only in this country, but throughout the world.

“In my opinion, however, governmental control should not be of a nature to hamper that legitimate commercial development which alone can lead to the ultimate perfection of the science.

“Systematic improvement and application of this new means of communication is, without doubt, imperative to our welfare as a nation.

“I cannot think of any one influence which would do more to aid our progress than a network of wireless stations, checker-boarding, as it were, the entire country. The expense of such a system would be relatively small and inestimable benefits would be derived therefrom.

“A high-power plant would cost less than $250,000 and its range would cover all of the United States.

“I am convinced that one year's service of such an installation would more than pay its first cost and the expense involved in its operation. There is scarcely any interest in all the nation which would not feel the benefit of a rightly planned and managed wireless service.

“Every Winter storms interrupt both telephonic and telegraphic transmission in many sections of the country. The sum total of any one year's damage would more than equal the original cost of the entire network of wireless plants which I suggest, and they would be beyond the reach of such destruction if constructed with reasonable care.

“Every one appreciates the value of our weather report service, but it is not as generally available as it would be if such a wireless network, under Government control, existed.

“Every year forest fires destroy millions upon millions worth of valuable property, which is a permanent loss. The existence of such wireless stations as I contemplate, operating in spite of obstacles, unaffected by rain, snow, wind, flood or fire, would constitute an incalculable gain.

“In this connection one of the most important advantages of the system would be the fact that the receiving apparatus would be so small and inexpensive that it could be placed anywhere and would be within the means of almost everyone.

For if we are to get the full benefits of a system of the sort, wireless telephonic transmission must be practically achieved, and when this is an accomplished fact the only apparatus necessary for the reception of perfectly intelligible, spoken massages, would be very inexpensive telephonic receivers.

“Imagine not only the value, but the comfort, which would accrue to dwellers in the isolated spots of the United States if, at certain hours each day, they knew that they could listen through such instruments to weather reports, crop advice, important general news, and, at stated intervals and times, through the same means could find relaxation.

“Operas, speeches, sermons — anything which can be made perceptible through the ear and is desirable — could be conveyed to them from the most remote centres of civilization and culture at a trifling cost.

“The educational effect of such service, alone,· could not fail to bring about within a few years what would amount to an educational and psychological revolution in the rural districts of this country. This takes no account whatever of the immense commercial value and domestic convenience which, as a matter of course, would result from the use of such a system.

“And if a plan of this kind would do much for safety upon land, imagine what it would accomplish toward safety upon the oceans and the great lakes.

“We are now in a position to erect a plant which, when required, would emit peculiar waves, by means of which any navigator, no matter where his ship might be, could determine accurately his distance from and position in relation to any given point.

“The general installation and use of such devices on shore and at sea would enable seamen to exactly steer their courses, without dependence upon compasses or observations of the sun and stars.

“Once such a system is in operation it will be possible by law to closely define such navigation routes as will be certain to reduce to a minimum the dangers of marine adventure.

“There is one momentous desideratum which must especially appeal to every thinking human being at this particular time and would be brought infinitely nearer to consummation by the perfection of such a system.

“All these forces and influences inevitably must make for peace because, by annihilating distance they will bring men into intimate contact one with another. This will mean acquaintance, acquaintance will mean friendship, friendship will preclude misunderstandings and wars.

“Now, when all the rest of the world seems to be thinking in terms of destruction we of this republic should think in terms of construction.

“The first requisite of this is the, perfection of our means of national self-preservation. There, again, the wireless would be of immense value if used as it easily might be.

“I have been always opposed to the manufacture of expensive war engines and implements of destruction, but the study of the awful spectacle which unfolds in Europe has taught me much.

“It is my present belief that no effort or expense should be spared which could help toward putting this country in a position not only to resist attack, but to make all the world respect those broad humanitarian principles for which, the American people ever have been willing to fight.”

This statement from the famous electrician astonished me. “How could this be done without incurring the same danger which has existed in Europe during many years, and which at last has culminated in the present calamity?” I asked.

“We can maintain peace for ourselves and help to maintain it for the world only by adopting methods radically different from those which so signally have failed in Europe,” he replied. “Hitherto it has been humanity's plan to preserve peace by creating forces for offense.

“So, I believe that the United States, with every possible speed and energy, should attack the task of insuring its own safety by means more scientific and advanced than those which so lamentably have failed in Europe.

“This, I think, is rendered comparatively easy by our exceptionally favorable geographical position, and we already have means at hand, not merely theoretical but demonstrable and in a measure experimentally proved, which, if consequentially employed, would make it impossible for any hostile force to imperil our tranquillity.

“Even now, wireless control from the shore of crewless and therefore doubly offensive vessels is a possibility, though, with their automatic engines, automatic steering gear, and automatic weapons, they be well out at sea.

“It is my belief that we should install along both of our ocean coasts, upon proper strategic and elevated points, numerous wireless controlling plants under the command of competent officers, and that to each should be assigned a number of submarine, surface, and aerial craft.

“From the shore stations these vessels, of whatever character, could be perfectly controlled at any distance at which they remained visible through powerful telescopes.

“With proper refinements, all now well known to experts and fully developed, such operations could be put absolutely beyond the reach of interference, except such as might come through injury or destruction of the machinery.

“If we were properly equipped with such devices of defense, it is inconceivable that any battleship or other vessel of an enemy ever could get within the zone of action of these tel-automatic craft without incurring a risk of annihilation amounting almost to certainty.

“And such a danger never would be braved. In fact, the mere knowledge that such craft existed would determine all possible aggressors to give these peaceful shores of ours a wide berth.” 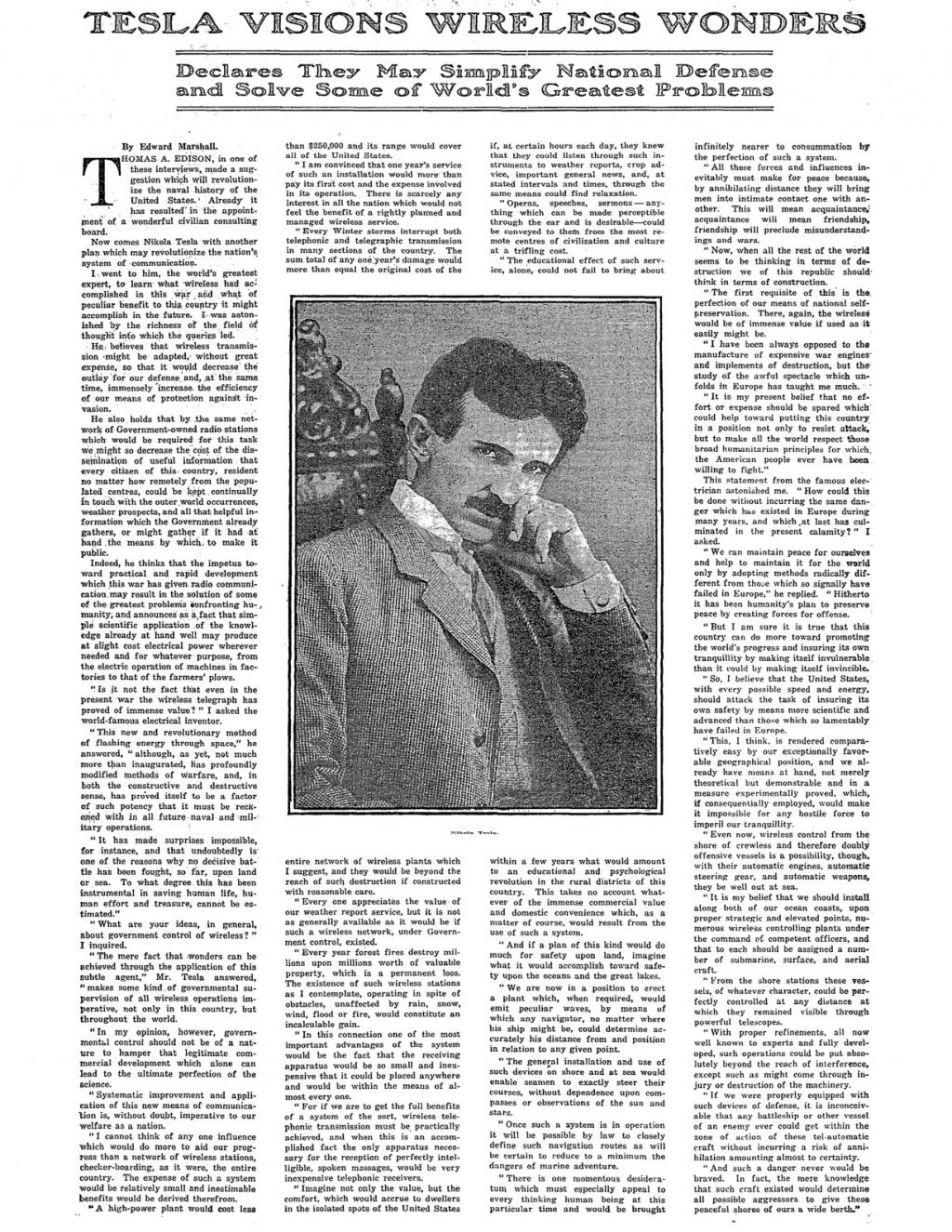