How Tesla Performed the Feat of Columbus Without Cracking the Egg

Probably one of the most far-reaching and revolutionary discoveries made by Mr. Tesla is the so-called rotating magnetic field. This is a new and wonderful manifestation of force — a magnetic cyclone — producing striking phenomena which amazed the world when they were first shown by him. It results from the joint action of two or more alternating currents definitely related to one another and creating magnetic fluxes, which, by their periodic rise and fall according to a mathematical law, cause a continuous shifting of the lines of force. There is a vast difference between an ordinary electro-magnet and that invented by Tesla. In the former the lines are stationary, in the latter they are made to whirl around at a furious rate. The first attracts a piece of iron and holds it fast; the second causes it to spin in any direction and with any speed desired. Long ago, when Tesla was still a student, he conceived the idea of the rotating magnetic field and this remarkable principle is embodied in his famous induction motor and system of transmission of power now in universal use.

In this issue of the Electrical Experimenter Mr. Tesla gives a remarkable account of his early efforts and trials as an inventor and of his final success. Unlike other technical advances arrived at thru the usual hit and miss methods and hap-hazard experimentation, the rotating field was purely the work of scientific imagination. Tesla developed and perfected, entirely in his mind, this great idea in all its details and applications without making one single experiment. Not even the usual first model was used. When the various forms of apparatus he had devised were tried for the first time they worked exactly as he had imagined and he took out some forty fundamental patents covering the whole vast region he had explored. He obtained the first rotations in the summer of 1883 after five years of constant and intense thought on the subject and the undertook the equally difficult task of finding believers in his discovery. The alternating current was but imperfectly understood and had no standing with engineers or electricians and for a long time Tesla talked to deaf ears. But, ultimately, his pains were rewarded and early in 1887 a company bearing his name was formed for the commercial introduction of the invention.

Dr. Tesla recently told the editors an amusing incident in this connection. He had approached a Wall Street capitalist — a prominent lawyer — with a view of getting financial support and this gentleman called in a friend of his, a well-known engineer at the head of one of the big corporations in New York, to pass upon the merits of the scheme. This man was a practical expert who knew of the failures in the industrial exploitation of alternating currents and was distinctly prejudiced to a point of not caring even to witness some tests. After several discouraging conferences Mr. Tesla had an inspiration. Everybody has heard of the “Egg of Columbus.” The saying goes that at a certain dinner the great explorer asked some scoffers of his project to balance an egg on its end. They tried it in vain. He then took it and cracking the shell slightly by a gentle blow, made it stand upright. This may be a myth but the fact is that he was granted an audience by Isabella, the Queen of Spain, and won her support. There is a suspicion that she was more imprest by his portly bearing than the prospect of his discovery. Whatever it might have been, the Queen pawned her jewels and three ships were equipt for him and so it happened that the Germans got all that was coming to them in this war. But to return to Tesla’s reminiscence. He said to these men, “Do you know the story of the Egg of Columbus?” Of course they did. “Well,” he continued, “what if I could make an egg stand on the pointed end without cracking the shell?” “If you could do this we would admit that you had gone Columbus one better.” “And would you be willing to go out of your way as much as Isabella?” “We have no crown jewels to pawn,” said the lawyer, who was a wit, “but there are a few ducats in our buckskins and we might help you to an extent.”

Mr. Tesla thus succeeded in capturing the attention and personal interest of these very busy men, extremely conservative and reluctant to go into any new enterprise, and the rest was easy. He arranged ror a demonstration the following day. A rotating field magnet was fastened under the top board of a wooden table and Mr. Tesla provided a copper-plated egg and several brass balls and pivoted iron discs for convincing his prospective associates. He placed the egg on the table and, to their astonishment, it stood on end, but when they found that it was rapidly spinning their stupefaction was complete. The brass balls and pivoted iron discs in turn were set spinning rapidly by the rotating field, to the amazement of the spectators. No sooner had they regained their composure than Tesla was delighted with the question: “Do you want any money?” “Columbus was never in a worse predicament,” said the great inventor, who had parted with his last portrait of George Washington in defraying the expenses of the preparation. Before the meeting adjourned he had a substantial check in his pocket, and it was given with the assurance that there was more to be had in the same bank. That started the ball rolling. Tens of millions of horsepower of Tesla’s induction motors are now in use all over the world and their production is rising like a flood.

In 1893 Mr. Albert Schmid, then Superintendent of the Westinghouse Electric and Mfg. Co. constructed a powerful rotating field ring with an egg made of copper, and larger than that of an ostrich, for Dr. Tesla’s personal collection at the Chicago World’s Fair. This piece of apparatus was one of the most attractive novelties ever publicly shown and drew enormous crowds every day. Subsequently it was taken to Mr. Tesla’s laboratory and served there permanently for demonstrating rotating field phenomena. In his experiments it was practicable to use as much as 200 horsepower for a short time, without overheating the wires and the effects of the magnetic forces were wonderfully fascinating to observe. This is the very ring indicated in the accompanying photograph (Fig. 1), giving a view of Mr. Tesla’s former laboratory at 46 E. Houston Street, New York. It is shown in detail in Fig. 2, and the mode of winding is illustrated in diagram (Fig. 3). Originally the two-phase arrangement was provided but Mr. Tesla transformed it to the three- and four-phase when desired. On top of the ring was fastened a thin circular board, slightly hollowed, and provided around its circumference with a guard to prevent the objects from flying off.

Even more interesting than the spinning egg was the exhibition of planetary motion. In this experiment one large, and several small brass balls were usually employed. When the field was energized all the balls would be set spinning, the large one remaining in the center while the small ones revolved around it, like moons about a planet, gradually receding until they reached the outer guard and raced along the same.

But the demonstration which most imprest the audiences was the simultaneous operation of numerous balls, pivoted discs and other devices placed in all sorts of positions and at considerable distances from the rotating field. When the currents were turned on and the whole animated with motion, it presented an unforgettable spectacle. Mr. Tesla had many vacuum bulbs in which small, light metal discs were pivotally arranged on jewels and these would spin anywhere in the hall when the iron ring was energized.

Rotating fields of 15,000 horsepower are now being turned out by the leading manufacturers and it is very likely that in the near future capacities of 50,000 horsepower will be employed in the steel and other industries and ship propulsion by Tesla’s electric drive which, according to Secretary of the Navy Daniels’ statement, has proved a great success.

But any student interested in these phenomena can repeat all the classical experiments of Tesla by inexpensive apparatus. For this purpose it is only necessary to make two slip ring connections on an ordinary small direct current motor or dynamo and to wind an iron ring with four coils as indicated in diagram Fig. 3. No particular rule need be given for the windings but it may be stated that he will get the best results if he will use an iron ring of comparatively small section and wind it with as many turns of stout wire as practicable. He can heavily copper plate an egg but he should bear in mind that Tesla’s egg is not as innocent as that of Columbus. The worst that can happen with the latter is that it might be, — er — over ripe! but the Tesla egg may explode with disastrous effect because the copper plating is apt to be brought to a high temperature thru the induced currents. The sensible experimenter will, therefore, first suck out the contents of the egg — thus satisfying both his appetite and thirst for knowledge.

Besides the rotating field apparatus Mr. Tesla had other surprises for his audiences, which were even more wonderful. So, for instance, the coil on three legs, visible in the foreground, was used to operate wireless motors, lamps and other devices, and the spiral coil in the background served to show extraordinary high potential phenomena, as streamers of great length. 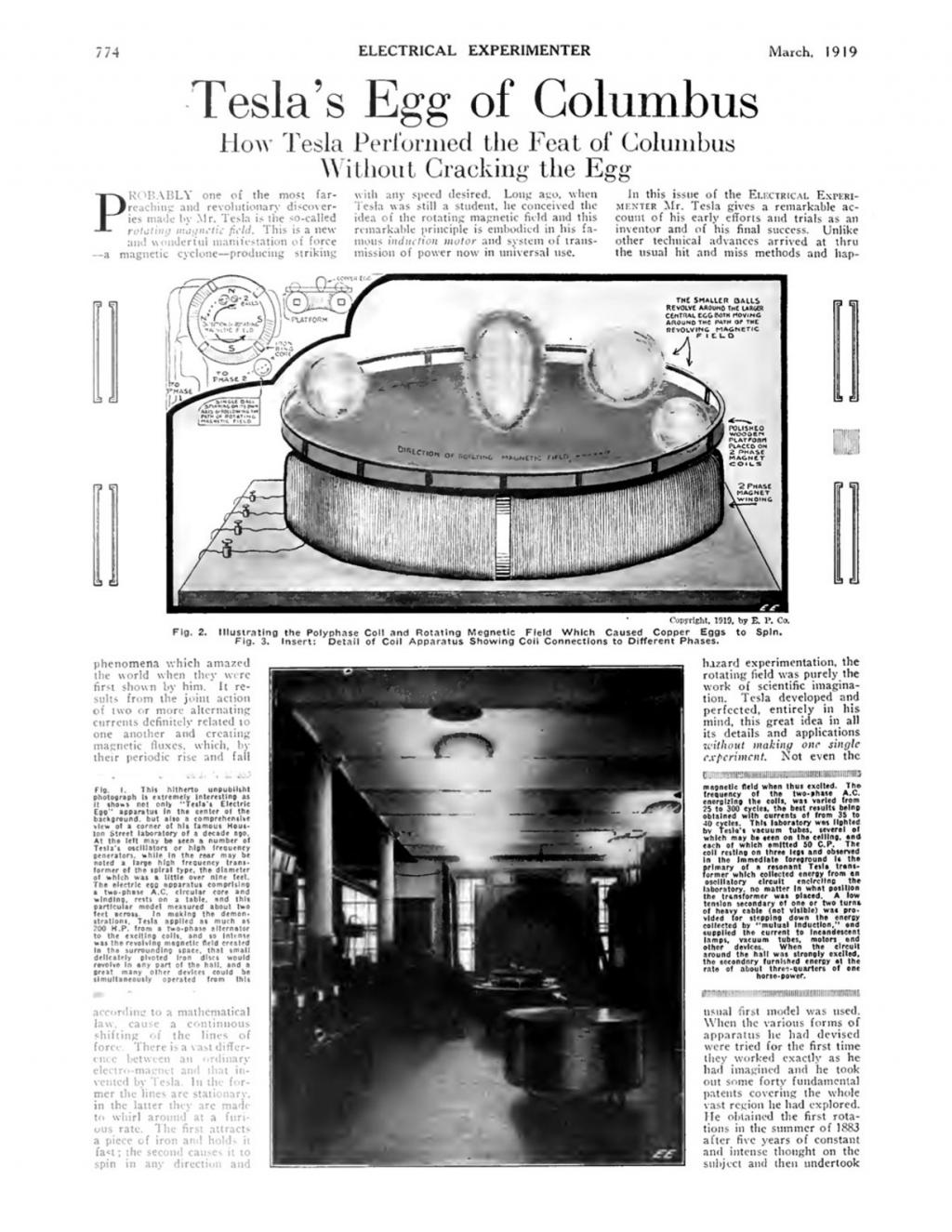