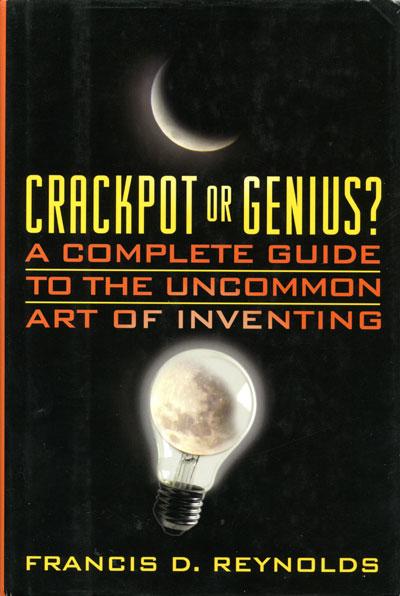 Crackpot or Genius?: A Complete Guide to the Uncommon Art of Inventing

History books are full of interesting stories of famous inventions, but seldom is it mentioned that most of the great inventors died poor.

In my teaching, consulting, and reading, as well as in connection with my own inventive efforts, I have become painfully aware of the overly optimistic and unrealistic views of inventing held by most laypeople and by beginner inventors.

There are several reasons for these distortions of reality. Inventing is a glamorous-sounding activity that makes news. The news accounts all too often emphasize the glamour but speak little of the difficulties.

Newspapers and magazines report on the successful inventions, but not on the failures. Failures aren't news, in most cases. This leaves the reading public with the impression that inventing is an easy way to make a fortune. We are not told that only one good idea in two or three thousand ever makes it to the marketplace. Nor do most people know that only 1 to 2 percent of all patents ever pay for themselves, and that only one patent in seven hundred makes big money.

Books on how to invent, how to get a patent, and how to sell your invention are for the most part designed to sell books. If a book tells its potential readers that they aren't apt to make it in the invention game, the book might not be popular. I would rather be honest. I'm telling it like it is.

The authors of other books on inventing are frequently patent attorneys or professional writers. Noninventors are not well qualified to tell others how to invent because they have never done it themselves. Patent attorneys may work closely with inventors, but not closely enough.

Lawyer-authors tend to cover their favorite subject, the patent system, in more detail than the average inventor or layperson is interested in. Lawyers are also inclined to overstate the need for legal services.

But the reverse is also occasionally true. I have a book written by a patent attorney on how to get your own patent without the help of a professional. Apparently in order to sell books, the author gives the impression that it is relatively easy to write your own patent application and negotiate it with the patent office. From all the authorities I have heard, and from my own experience, I know that getting a worthwhile patent without professional aid is extremely difficult and certainly not to be recommended.

So, this book is somewhat of an exposé. Where something stinks, I say so. I have tried to expose the companies that rip off unsuspecting inventors, and also expose the few crooked or ignorant inventors who rob careless buyers and investors.

For the most part, however, I have no axes to grind. The market for private inventions in this age is very poor, but that is no one's fault - it is simply a fact of the marketplace.

I am not concerned that the frankness of this book will discourage many inventors. The need to invent is born into some of us, and no book is going to make a true inventor give it up. The book will, however, acquaint new inventors with the problems of inventing and the odds of success, and hopefully save many of them both money and time.

At first this work was to be a handbook, text, or guide for beginning inventors. As the book has evolved, it is still for the inventor, but for others as well. It has grown far broader in scope and will appeal to a wide readership.

I like to invent, but I also find great satisfaction in teaching, lecturing, and acting as a consultant to other inventors. And the nature of the inventing game itself fascinates me. I have become an observer and student of the invention process, in addition to being one of the participants.

I have been both a corporate and a private inventor, but the corporate side of inventing is controlled by the rules of the various corporations. Therefore, this work will largely ignore that field. It will primarily address the private inventor and those with other interests in inventing.

One last thing before we serve the main course: I have covered a lot of different invention-related subjects in the book, including a little science, some language, perpetual-motion machines, advice to parents of inventive children, and so on. I wrote about those things because they interested me. I could do that because it is my book. While I was writing I was the boss.

But now you are the boss. If you start a chapter and don't like it, you can skip it and try for one you may like better. Different things for different people. Enjoy ... and possibly even profit.