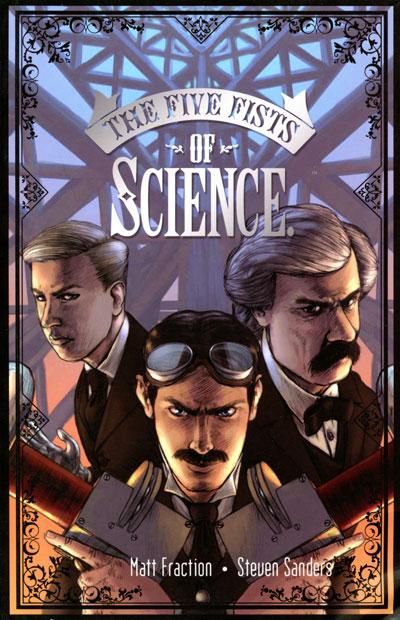 The Five Fists of Science

by Matt Fraction and Steven Sanders

Steampunk Victoriana (or rather Edwardiana, since, although no proper date is given, Five Fists Of Science is almost certainly set in the 20th century) seems to hold an endless fascination for writers, and not least comics writers. We've had Alan Moore's The League of Extraordinary Gentlemen, Ian Edginton's Scarlet Traces, Grant Morrison's Sebastian O and Bryan Talbot's Luther Arkwright series, to name just a few off the top of my head.

And now we have Matt Fraction's hugely enjoyable 'blockbuster' The Five Fists Of Science, which in a very similar vein purports to show us just what Nikola Tesla was really up to with his mischievous writer pal Samuel Clemens, the lovely Baroness Bertha Von Suttner and, er, a young chap called Tim. I assume the aforementioned fifth fist is Tesla's big invention (it turns out that ex-pat Serbian inventors had a thing about giant battle robots absolutely ages before the Japanese ever did). And it's worth noting that this is the first piece of US-based comic book steampunk -- all the others are by British writers. Is the perceived transatlantic experience of the 19th and early 20th century entirely less hubristic or is there another explanation? Answers on a zeppelin, please.

The Five Fists Of Science is not a complicated book, it could be made into a Hollywood summer blockbuster with an absolute minimum of changes. The main difference between The Five Fists Of Science: The Movie and, say, Star Wars Episode III would be that Five Fists is fabulous science-fictional fun, has some strong likable characters and a wicked sense of humor. Honestly. Not only is there some great dialogue here, but there's also some equally great observational humor brilliantly portrayed by artist Steven Sanders. Hell, I'll go even further and say that most of it is not even geek humor (e.g. referencing the 'hilarious' Batman continuity error from Batman, issue 25); it is humor anyone who thinks Steve Martin hanse't been funny in decades should get.

And the story? Well, it's some nonsense about Nikola Tesla inventing giant robots, and an achingly idealistic plan by Clemens to use them to end war with the help of friend-of-the-rich-and-famous Baroness Suttner, and Tesla's friend, Tim. It's a fine plan, and they would've gotten away with it too, if it hand't been for that meddling opposing team of contemporary luminaries that included Edison, Marconi, J.P. Morgan and Andrew Carnegie.

To say that liberties have been taken with historical truth in Five Fists would be to underestimate Matt Fraction's chutzpah; let it suffice for me to offer a warning to younger readers out there: if you use The Five Fists Of Science as a revision aid for any kind of important, official examination you will fail that important, official examination. Five Fists plays fast and loose with the truth and is all the better for that. Fraction has an ear for snappy, alternating dialogue that compares favorably with Brian Michael Bendis or Warren Ellis. He is more than capably assisted in the art department by Steven Sanders who does smooth, clear work and has a real flair for comic (and comic book) pacing.

If I say that Five Fists often reminded me of Ghostbusters (not least the ending) then I think that should give you an excellent idea where this book is coming from and whether or not it's for you. Clemens makes an excellent replacement for Bill Murray's Venkman, and Tesla could almost be Spengler's (the brainy one's) great-grandfather; not to mention the fact that the scientific explanation in both is on about the same level!

It's a nice new twist on the well-trodden UK idea of steampunk, with fewer dandies and more action! I urge you all to “Retreat before the clenched fists of science!”