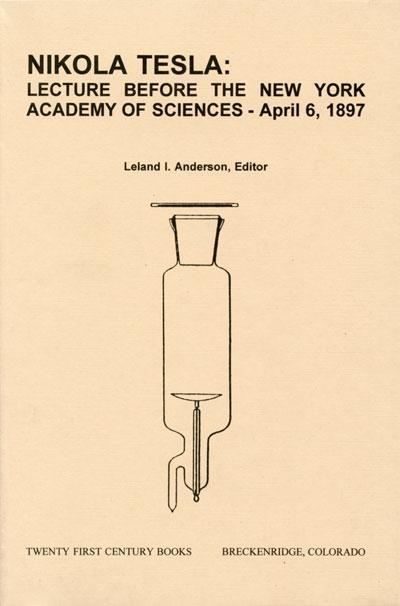 Nikola Tesla: Lecture Before the New York Academy of Sciences April 6, 1897: The Streams of Lenard and Roentgen and Novel Apparatus for Their Production

Anderson's reconstruction of Tesla's lecture before the New York Academy of Sciences on April 6, 1897, is a most important contribution. In this lecture, Tesla went beyond his titled topic, “The Streams of Lenard and Roentgen and Novel Apparatus for Their Production,” and expanded on his X-ray articles published in the New York Electrical Review. Some 120 large drawings of his vacuum tubes were displayed on the walls of the lecture hall. Among the tubes represented were not only Crookes and Lenard types but varieties of single-electrode tubes of Tesla's own invention, some of which were used for his Roentgen-ray demonstrations accompanying the lecture.

During the lecture, Tesla discussed the uses of some of the tubes in his experiments with wireless telegraphy. Among his tubes, Tesla said, were “a great number of receiving devices.” Compare this statement with Tesla's 1916 remark reported by Anderson in the first book of this series, Nikola Tesla On His Work With Alternating Currents: “Well, in some of these bulbs I have shown, for instance, that a heated conductor emits a stream of ions, or as I said at that time, charged particles, and a few of these bulbs have been used exactly in the same manner the audion is used today.”

One is prompted to ask, “What was Tesla really looking for in his research and experimentation with vacuum discharge tubes?” His statements about using the tubes in the receiving and detection of wireless signals offers clues. In his lecture before the Academy, Tesla often referred to Lenard- and Roentgen-streams and tubes; he obviously considered Lenard and Roentgen to hold equal priority in the discovery of the X ray. The Lenard tube, as well as Lenard's experimentation, were of particular interest to Tesla in that cathode rays (streams of electrons) actually emanated from the aluminum window opposite the cathode of the tube and proceeded a few centimeters into the air. Recent research by James Corum and Kenneth Corum indicates that Tesla was looking for methods of moving electrons with such devices as open-air diodes or even relativistic electron-beam (REB) diodes, which, if viewed as they are built today, including power supply, resemble closely a Tesla coil and a Lenard tube. The speculation about Tesla's moving electrons is, perhaps, only the beginning of the story. Other evidence, particularly his research on particle beam weaponry, points to his interest in moving larger particles.

Another great value of Anderson's contribution in reconstructing this lecture is that it shows us historically the extent of Tesla's work with vacuum tubes up to 1897. Roentgen's announcing the discovery of the X ray provided Tesla with yet another area in which to contribute his discoveries and inventions. This lecture on the rays of Lenard and Roentgen, and Tesla's series of articles in the New York Electrical Review contain material far more advanced than any other contemporary work. Tesla's 1897 lecture discussion of “reflected” Roentgen rays, offered with data and tables, compares almost exactly to Arthur H. Compton's 1922 monograph on the topic of secondary radiation. Tesla also offered a design of apparatus to generate “reflected” rays. Tesla's lecture is a fount of information beyond the knowledge of most of his contemporaries, offering a wide array of tables, charts, diagrams, photographs, schematic designs, and suggestions of one process after another for the production of X rays, the use of vacuum tubes, and special procedures for refining the operation of all kinds of apparatus. Tesla, here and in other works, discussed scientific principles not “discovered” until years later.

The most significant contribution of this text is, perhaps, that it shows in his true light one of the greatest visionaries that ever lived-a man far ahead of his peers yet gentle and willing to give what he had to the world. With regard to the relationship between Tesla's work and the world of science, it is curious to note that it has taken a better part of the last 100 years since his invention of the resonant transformer for researchers to truly succeed in duplicating the Tesla coil design, this in spite of the great pains he went to in making his recommendations clear. Let us hope that, as more information on Tesla's work becomes available, much greater attention will be given to it, to the betterment of our world.