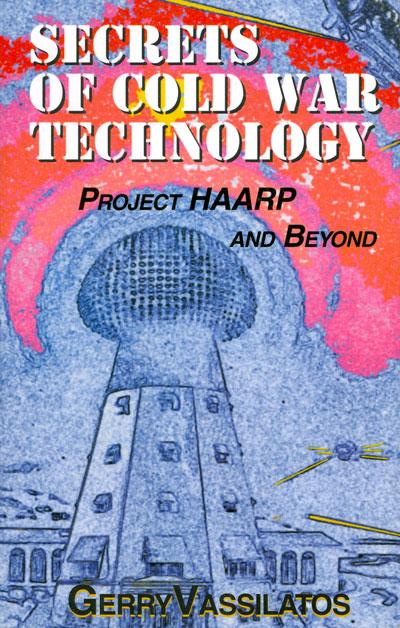 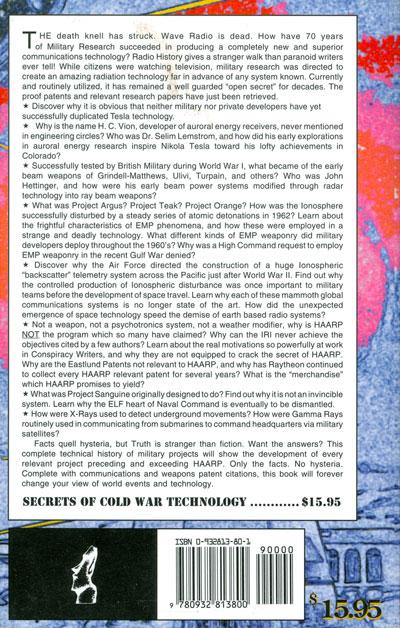 Secrets of Cold War Technology: Project HAARP and Beyond

The death knell has struck. Wave Radio is dead. How have 70 years of Military Research succeeded in producing a completely new and superior communications technology? Radio History gives a stranger walk than paranoid writers ever tell! While citizens were watching television, military research was directed to create an amazing radiation technology far in advance of any system known. Currently and routinely utilized, it has remained a well guarded “open secret” for decades. The proof patents and relevant research papers have just been retrieved.

Discover why it is obvious that neither military nor private developers have yet successfully duplicated Tesla technology.

Why is the name H.C. Vion, developer of auroral energy receivers, never mentioned in engineering circles? Who was Dr. Selim Lemstrom, and how did his early explorations in auroral energy research inspire Nikola Tesla toward his lofty achievements in Colorado?

Successfully tested by British military during World War I, what became of the early beam weapons of Grindell-Matthews, Ulivi, Turpain, and others? Who was John Hettinger and how were his early beam power systems modified through radar technology into ray beam weapons?

What was Project Argus? Project Teak? Project Orange? How was the ionosphere successfully disturbed by a steady series of atomic detonations in 1962? Learn about the frightful characteristics of EMP phenomena, and how there were employed in a strange and deadly technology. What different kinds of EMP weaponry did military developers deploy throughout the 1960's? Why was a High Command request to employ EMP weaponry in the recent Gulf War denied?

Discover why the Air Force directed the construction of a huge Ionospheric “backscatter” telemetry system across the Pacific just after World War II. Find out why the controlled production of Ionospheric disturbance was once important to military teams before the development of space travel. Learn why each of these mammoth global communications systems is no longer state of the art. How did the unexpected emergence of space technology speed the demise of earth based radio systems?

Not a weapon, not a psychotronics system, not a weather modifier, why is HAARP NOT the program which so many have claimed? Why can the IRI never achieve the objectives cited by a few authors? Learn about the real motivations so powerfully at work in Conspiracy Writers, and why they are not equipped to crack the secret of HAARP. Why are the Eastlund Patents not relevant to HAARP, and why has Raytheon continued to collect every HAARP relevant patent for years? What is the “merchandise” which HAARP promises to yield?

What was Project Sanguine originally designed to do? Find out why it is not an invincible system. Learn why the ELF heart of Naval Command is eventually to be dismantled.

How were X-Rays used to detect underground movements? How were Gamma Rays routinely used in communicating from submarines to command headquarters via military satellites?

Facts quell hysteria, but Truth is stranger than fiction. Want the answers? This complete technical history of military projects will show the development of every relevant project preceding and exceeding HAARP. Only the facts. No hysteria. Complete with communications and weapon patent citations, this book will forever change your view of world events and technology.