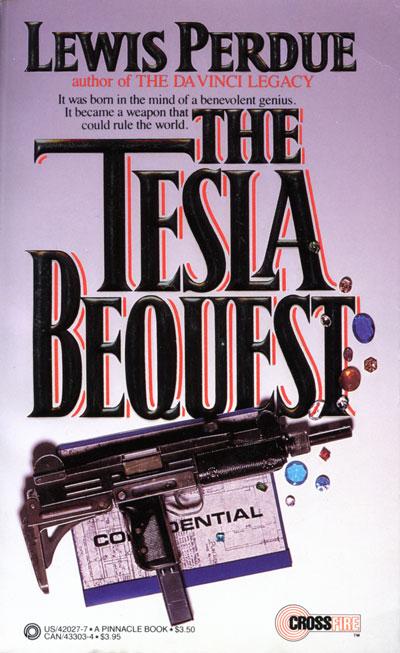 New York City, 1943
Nikola Tesla, possessor of the most brilliant mind in the history of physics, lies dying in the dark. His death will look natural. It is not. It is the opening act in the deadliest conspiracy the world has ever known.

Washington, D.C., 1984
A secret society of powerful men prepares for its supreme victory. For over forty years it has manipulated a plot of extraordinary cunning, scientific research, international intrigue, and expedient murder. Using the stolen papers of Nikola Tesla, it is a step away from creating the world's ultimate weapon. It is an eight-headed serpent with a single goal: world domination.

Its adversaries have been destroyed. Two remain. A beautiful woman with a secret that has already cost her lover's life and a rugged ex-navy pilot with a brilliant mind of his own. Together they are racing across the globe, one step ahead of the serpent's snapping jaws, desperate to save themselves—and the world—from... The Tesla Bequest

The Tesla Bequest, like my other books, is based on a great deal of factual research.

I first became interested in Nikola Tesla more than twenty years ago when I believed I was destined to become a scientist. It was at this time that I built a Tesla Coil. From plans in an electronic magazine, I built a device that emitted huge arcing bolts of electricity. It would light up fluorescent lights in the next room without any wires attached. It was a miniature of the original that Tesla built for his experiments on the wireless transmission of electrical power through the earth.

I soon discovered that Nikola Tesla developed the foundation for our entire modem electrical culture.

Back around the turn of the century, another genius, Thomas Edison, had built all his devices around direct current electricity—the sort of stuff that runs flashlights, car batteries and other small appliances. Direct current's largest problem is that it doesn't travel well. Alternating current, which waits for you today in your wall sockets, was thought to be impossible to generate reliably. Tesla was laughed out of his college physics class for suggesting that he had developed a way to produce it. And after immigrating to America where he was hired for a brief time by Thomas Edison, Tesla continued to be the butt of his employer's ridicule concerning alternating current. They laughed when he sat down to invent.

Aside from inventing the form of electricity on which our society is based, Tesla had an amazing repertoire of interests. He was experimenting with wireless communication a decade before Marconi. He laid the foundation for robotics back in the 1890s—principles that are valid today. His theories were used as a foundation by the great Nobel Prize winners in physics: Einstein, Compton, Millikan, Franck.

And for more than two decades before his death, he claimed he had invented a powerful “death ray” which would make modem weapons obsolete. The U.S. Government pretended not to take Tesla seriously, but when the inventor died in 1943, it seized all of the Tesla papers it could get its hands on and classified them top secret.

Those papers are still classified top secret today. As part of her research to write a recent biography of Tesla, author Margaret Cheney (Tesla: Man Out of Time, Prentice Hall, 1981, $16.95) made a number of Freedom of Information Act requests to many government agencies asking for access to Tesla's papers.

After repeated denials that the government had any of Tesla's papers, the Defense Department finally admitted that it had Tesla's research documents, but refused to release any of them, saying that they were still classified for national security reasons. This was in 1980.

What is in those papers that the government feels obliged to keep secret nearly forty years after Tesla's death?