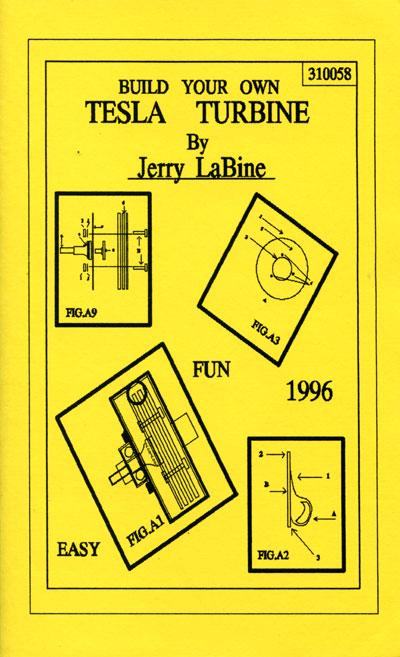 Build Your Own Tesla Turbine

Build your own Tesla turbine using off the shelf parts. This book is produced because of the overwhelming demand for information on the Tesla turbine. Being a noted Tesla turbine builder, I have decided to produce a series of how-to-do-it-yourself books on the Tesla turbine. These books will be listed in degrees of difficulty. This first book will be easy enough for a child of 12 years old. I do suggest, and highly recommend that parents supervise their children when any power tools are used. Hope you enjoy this book.

Forward
When Jerry LaBine showed me his first turbine back in 1993, I quickly surmised that he was intent on making the best turbines in the world. Although his first model was somewhat crude, his desire for perfection was crystal clear. Now that he has constructed a number of them, with each successive one better than its predecessor, he has reached a plateau all his own. Jerry has taken great pains in comprehending Tesla's methods of design as well as to execute them with his own unique talents. His latest generation of models can be described quite simply: they are superb.

With all of his success, Jerry now wants you to get into the act. If you haven't built one before and you're a little reluctant to get started, now is the time to expand your knowledge of the Tesla Turbine, from a practical standpoint.

Jerry will short-cut you into producing a good working model without a big financial burden. He is going to lead you there using parts and procedures which will make your effort a good sound one that you can be proud of. This book contains everything you need to know. Other efforts have been done before and the working knowledge expressed, but they've been cumbersome for a beginner and not something you can do without a good machine shop behind you. Having learned from scratch, Jerry knows what you're up against and how to get around the rough spots. What is most amazing is Jerry's creative approach in designing a turbine with parts which are readily available and assembly methods which will make you're learning project a breeze.

I highly recommend this book which is the first in a series that Jerry LaBine will be producing.