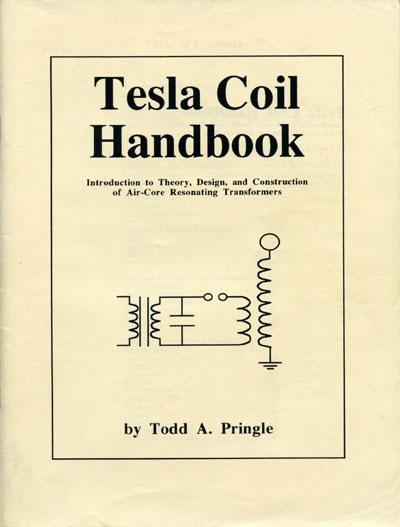 by Todd A. Pringle

Named after the inventor Nikola Tesla, Tesla coils are electrical devices designed to produce high frequency, high voltage alternating currents. Originally, Tesla used them as power supplies for his high frequency electric lamps. Around 1900, in response to a request from the U.S. Government for the development of a maritime wireless system, he adapted them for use as a major component of specially designed radio transmitting and receiving sets. About the same time, he adopted the same design principle (known as the resonant transformer) in the construction of two very large oscillators used to conduct fundamental experiments in the global propagation of radio signals. The pioneer of radio, polyphase alternating current generation and utilization, and numerous related inventions essential to the modem age, Nikola Tesla was a maverick genius who towered over Thomas Edison in the late nineteenth century. Plagued by obscure personality quirks and manipulated by some of the big fish in the financial and industrial establishments, Nikola Tesla would live to see his reputation fade and his assets dwindle before he died alone in 1943. Tesla was a brilliant star in American inventive history and the world owes him a great debt. Readers are encouraged to learn more about the rich history surrounding Tesla and the electrification of America.

The Tesla coil evolved out of a need to produce radio frequency (RF) signals more efficiently. The principle of resonance as embodied in Inductor - Capacitor (LC) circuits was fairly well understood and accepted within the scientific community throughout most of the nineteenth century. The work of Wollaston, Helmholtz, and Kelvin tantalized other scientists about the world of high frequency currents. Later experiments by Hertz with simple tuned circuits responding to the waves produced by induction coils would hint at the possibilities of long distance transmission of signals through the air. But it was Tesla who used tuned and grounded induction coils (RF Oscillators) to produce devices efficient enough to usher in the age of radio.

Tesla began his experiments with the device, also known as a disruptive discharge coil, around 1890. Within three years, before a meeting of the National Electric Light Association in St. Louis, he was able to use it to demonstrate the transmission and reception of strong signals without the use of wires. In 1899, in order to refine the apparatus and further carry out his experiments in radio propagation, Tesla built a giant version of his oscillator at Colorado Springs known as the magnifying transmitter. In addition to providing radio communications, he felt that his system could be adapted for the transmission of electrical energy. Although we still rely upon power transmission lines for the distribution of electricity, the fundamental principles of earth resonance that were first established in Colorado Springs were the product of genius, and the design astounds researchers even today. Tesla's pioneering work in the areas of electrical and mechanical engineering served to establish a number of prototype models that are available to be recreated and improved upon today. The Tesla coil is just one example.

This book is intended to introduce electrical experimenters to the Tesla coil. This book is not and does not pretend to be an advanced scientific text. Unlike Tesla's three phase induction motor and poly-phase generation and transmission system, much of the knowledge and theory behind the operation of his oscillators has been omitted from college text books and curricula. Because the design has been filed away under the heading of academic curiosity only, little reliable information can be found about it. Since publicly available grants are only allocated to projects with a well defined governmental or industrial need, much of the recently restored information that is becoming available in the field is the result of privately funded research. Many of those who were interested in the theory and construction of Tesla coils had to resort to the world of Testa Literature as a source of information. Because of his intelligence, outspokenness and passionate vision of future technology, Nikola Tesla has, for better and for worse, become a folk hero for alternative technology enthusiasts as well as believers in esoteric free energy devices. While Tesla literature can be fascinating and evocative, it certainly isn't conventional science. I'm not trying to pick any fights, but I don't believe that the Law of Conservation of Energy can be denied. However unfortunate, perpetual motion is unattainable, anti-gravity is without theoretical support, and Elvis is dead. Sorry.

Most of the reputable sources on Tesla coil theory require a firm background in calculus and basic circuit analysis. If you're not an electrical engineer, but you do know the difference between alternating and direct currents, peak voltage and r.m.s. voltage, resistance and impedance, inductance and capacitance, and you know which end of a soldering iron to grab, then you should find enough information in this book to understand why a Tesla coil does what it does and how to design and build one. If you don't understand basic electrical theory or you don't know what a soldering iron is, find out before you attempt to build anything described in this book. This is very serious. Electricity can kill you. Do not build any electrical devices unless you know exactly how they work and what they will do when you plug them in. The information presented in this book is not complete and may contain errors that could result in a hazardous condition. Just because a circuit is presented in a book doesn't mean that it will work exactly as described. Tesla coils can be nasty, unpredictable little buggers that have to be kept on a tight leash and seldom bark except when you don't want them to. Please be very careful. Consider yourself warned!