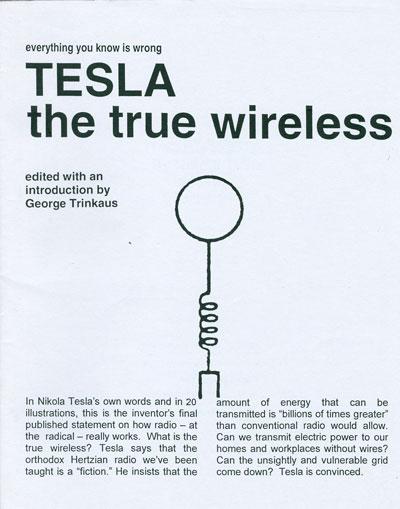 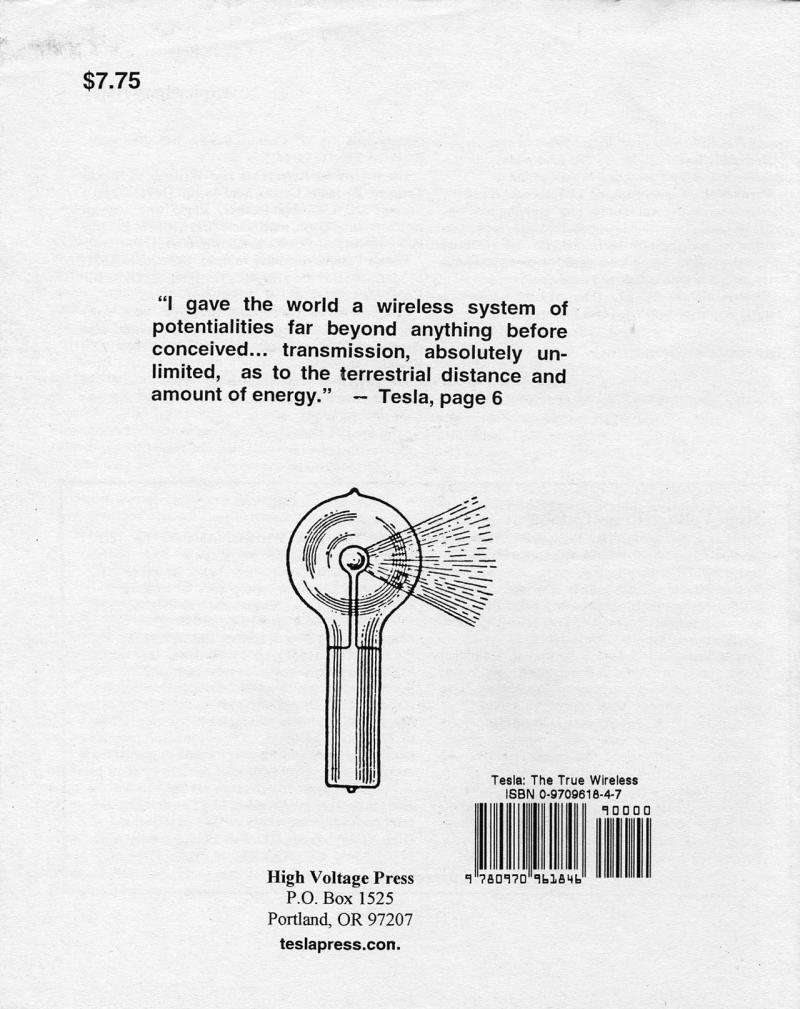 by Nikola Tesla and George Trinkaus

Tesla wrote The True Wireless back in 1919 because he wanted to knock the prevailing orthodoxy of radio theory into a cocked hat. I am republishing the piece in 1998 because that orthodoxy still prevails and because I agree with Tesla that into a cocked hat is where this persistent and annoying body of dogma should be knocked.

How does radio really work? What responsible scientific explanations can we propose for the mysteries of wireless? What are the true dynamics of propagation in as much as we can ever know them?

Unfortunately, early on in the development of radio, explanations were proposed, and, as is the sad habit of academic science, some of these conjectures readily solidified into the official theory.

Does modern science have no patience with mystery? In 1901 long-distance wireless was achieved. In the very next year, a respected scientist, Oliver Heavyside, suggested this might be done by signals bouncing off of ionized layers presumed to exist a hundred or so miles up. Perhaps because it was consistent with the already accepted notion that radio behaved like light rays that can be reflected, the Heavyside layer (later called the ionosphere) had instant academic appeal, and, despite the protest of thinkers with other ideas about how radio worked, the theory of ionospheric propagation became a fixture in the official theory, enabling radiomen through the century to speak glibly of “skip,” whether such a phenomenon demonstrably exists or not. Tesla said, “There is no Heavyside layer, or, if it exists, it is of no effect.”

Here in a nutshell is the official theory of wireless propagation in the ham bands as abstracted from the 1996 edition of the American Radio Relay League's Radio Amateur's Handbook:

Radio is radiation. Radio is waves. Radio waves behave like light rays. Unobstructed, as in the “vacuum” of space, radio moves in straight lines. Like light it can be refracted, reflected, scattered, or absorbed and travels at 186,000 miles per second. The whole model of orthodox radio is demystified through this analogy to the observable behavior of light.

The layers of the so-called ionosphere vary in density, and, hence refractivity. Under the influence of sunlight, there are day-night fluctuations and 11-year sun-spot cycles which enhance or diminish ionospheric reflection and hence the ability of short-wave radio to propagate long-distance in this fashion.

Radio is assumed to be an aerial phenomenon. Although sometimes a surface traveling “ground wave” is acknowledged to account for propagation at lower frequencies, conduction through the earth, which Tesla proposes, is implied to be an impossibility in the orthodoxy. To Tesla, radio propagation is conduction.

Tesla says here that orthodox Hertz radio theory is “one of the most remarkable and inexplicable aberrations of the scientific mind which has ever been recorded in history” and that it “has stifled creative effort in the wireless art and retarded it for twenty-five years.”

Orthodoxy drives out speculation. We can be grateful to Tesla for his attempt to smash this orthodoxy and for his giving us, if we go with him, a new beginning in this neglected science. Liberated, we can proceed to wonder again at the mysteries, to speculate, experiment, even have some fun.

Mostly for the last reason, I built a sensitive field-strength meter, connected it between an antenna and ground, tuned it to a strong local AM broadcast signal, and sat back and watched. I used a large-face micro-ammeter that could be read from fifteen feet away. Set on a worktable near the foot of my bed, it became a source of entertainment, my etheric TV.

It was essentially the simplest crystal receiver, with the 0-to-200 micro-ammeter in the circuit where the earphones normally go.

For amplification, Tesla-style resonant amplification, I connected a big coil with a parallel variable capacitor as a tank tuner between field-strength meter and ground. I had also tried it between meter and antenna but achieved greater effect in the ground circuit, which was suggestive. (If you connect your AM or shortwave receiver's antenna terminal to ground instead of to an aerial, you commit a Hertzian heresy, but how do you explain the improved reception?) As measured on my vacuum-tube voltmeter, 1.5 volts or more can be coaxed out of ground by tuning in the above fashion. Typical of such an elementary crystal set in the city. reception was dominated by one or another of two powerful local stations. I tuned the system to the strongest meter reading, which gave me 50-kilowatt KEX (Portland, Oregon) at 1190 kilocycles, whose transmitter was less than five miles away. The meter's needle swung to mid-range and held, twitching to the signal's modulation (which, surprisingly, was less than ten percent of its deflection).

Now one would expect that a 50 kW signal from only five miles away would be of steady intensity, but variations over a period of days could be as dramatic as 50 microamps. It was interesting to try to correlate variations with weather conditions, day and night, lunar cycles, etc., but none of these speculations was conclusive. What was conclusive was that nothing in conventional propagation theory accounted for what I was seeing.

Hertzian theory does allow for propagation at this relatively low frequency by means of the so-called ground wave; thus any variations in the alleged ionosphere would not be a factor, nor would it be anyway at this short distance.

So here is an instance of how the orthodoxy is empty. And here is an invitation to speculate anew. What is the true nature of the radio-conductive medium? I don't know. You don't know. We can only guess. Evidently the medium is rich in influences. The atmosphere, the earth (let's call it all the electrosphere) may be coursed by currents, not all electrical necessarily but also of other “unusual energies,” including perhaps those known to the dowser. These energies might exercise attenuating and even enhancing influences on the radio energies imposed by man. So let's hypothesize that the medium could be a veritable soup of churning energetic activity that can affect a signal. Let's appreciate our ignorance, be humble, and refrain from smug assertions, dear ARRL and its graduates.

By June 1919 when Hugo Gernsbach published Tesla's “The True Wireless” in his Electrical Experimenter, Tesla was well on his way to being rendered invisible by the media, and he must have been grateful for this opportunity to express himself publicly. In earlier years, the media had romanced Tesla to the public as the “electrical genius” who had invented the alternating-current system, and he had enjoyed great access to the press, but when Tesla reinvented his own system, after it had been established industrially as the official system, his voice had to be silenced.

By 1921 Tesla was unpublishable, officially at least. In the few years prior to that, the Experimenter published Tesla profusely. Tesla's publication of “The True Wireless” in the Experimenter would appear to have been granted grudgingly, though, considering the way in which the article was laid out by the magazine's graphic people. Clarity is sacrificed to “pack,” for what you read here in 11-point type over thirteen pages, the Experimenter published in 8-point over four. Because of this tight economy, and because of the limitations of metal-type layout in the letterpress era, the illustrations in the original are often placed remotely from the relevant text. Moreover, many of the original illustrations are tiny (even by High Voltage Press standards). All this makes the reading of the original a drag. I trust that my drudgeries in resetting and redesigning this work make your experience a more pleasant one.

Tesla, in this writing, aware that in respect to the establishment he had nothing to lose, indulges a candor that he admits he could not indulge previously “on the ground that such idle and far-fetched speculations would injure me in the opinion of conservative businessmen.”

Tesla's challenge to the radio theory he blames on Hertz comes from the same place as Tesla's challenge to the orthodoxy of electric power transmission. The same electrics are involved. Tesla's far-fetched, speculative wireless is based on the electrics which allow for the phenomenon of the single wire without return. Tesla is determined that this radical novelty be comprehended by his brain-washed readers and he resorts to illustrations using crude hydraulic analogs (Figures 4 - 6). If you have seen a hot Tesla coil in action, then you've been shown a more poetic example of Tesla's electrics in the corona, sparks, and streamers that leap from the terminal, eagerly seeking conduction in the ambient medium. The single-wire-without-return phenomenon is at the heart of Tesla's radio and wireless power.

Done Tesla's way, the power of radio is “unlimiled.” But, says Tesla, “The experts are blind to the possibilities." The True Wireless is Tesla's lament on this theme. The tone suggests the frustration of the inventor who has been standing by mutely over the years seeing his radio used but at the same time misused and the phenomenon systematically misexplained even to its practitioners.

No ionosphere. Not an aerial phenomenon. Antenna current irrelevant. Parallel antennas unnecessary. Mountains irrelevant. Short waves ineffective. What heresies! Where would the average ham be without these precepts? His license exam requires at least a rote grasp of the orthodoxy; his social milieu takes it for granted.

But the old dogma does not serve us says Tesla. It is the theory of an impotent radio. “The transmitter generates several systems of waves all of which, except one, are useless,” he has said elsewhere, suggesting that a conventional transmitter works only inadvertently. Evidently, the active element even in conventional “Hertzian” radio is Tesla's electric conduction, but this goes unacknowledged. The result is what he has called an “unfit apparatus” for the job. Tesla's radio is so potent that “transmission is absolutely unlimited as to terrestrial distance and the amount of energy,” which means energy sufficient not only for communications but for the lighting of cities and the driving of the machinery of industry.

This, says Tesla, is the true wireless.