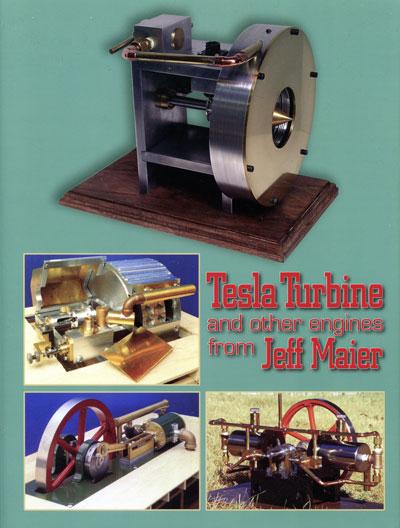 Tesla Turbine and other engines from Jeff Maier

by Jeff Maier and Clover McKinley

Nikola Tesla is best remembered as the inventor of the AC induction motor and the three-phase system of AC power generation and distribution that is universally used today. Tesla is also remembered for his experiments with high voltage and RF (radio frequency) apparatus; most people know what a Tesla coil is. Tesla also worked a lot with, and received many patents for, mechanical apparatus. One of these devices is the Tesla turbine. This machine has intrigued me ever since I first read about it, and I've wanted to build one for a long time. I was able to find material in biographies of Tesla that mentioned the turbine, and was able to get a general description of it, but found no solid details of how a true Tesla turbine should be built.

All conventional turbines have some sort of arrangement of blades. The Tesla turbine is unique in that it has no blades at all and works on different principles. Conventional turbines operate on a combination of expansion through sets of stationary and moving blades and impulse on the blades. Some turbines are pure impulse.

The Tesla turbine is a series of closely spaced smooth disks. The working fluid is expanded through a nozzle and is injected tangentially to the disks perpendicular to the axis of rotation. Any fluid, whether it's steam, compressed air, or combustion gasses, will adhere in a thin layer to a smooth surface as it passes over that surface. In the case of the Tesla turbine, the smooth surfaces are the disks comprising the rotor (hereinafter called the “runner”). The fluid, since it adheres to the disk surface, will tend to make the disk move. Since the disk is attached to a shaft, the fluid will cause the shaft to rotate. As the fluid gives up energy to the disk, it spirals in toward the center of the disk. The center of each disk has a hole in it, where the spent fluid is exhausted. Note that the fluid actually adheres to the disk, and does not impart its energy to the disk by friction. This is an important distinction, as a frictional means would not be a reversible process like adhesion is.