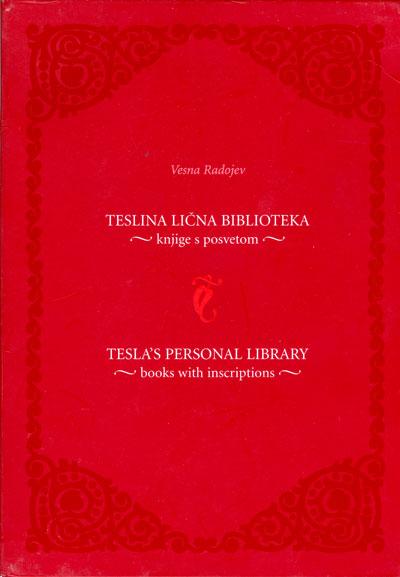 Gathering of books for the Museum's library started after Nikola Tesla's legacy had come from America and upon the establishment of the Nikola Tesla Museum. Besides personal belongings and archive material, part of the legacy was made up of books, magazines and newspaper clippings. As the years went by, the museum itself started forming its own library of purchased books through inter-library loan or donations. The books primarily deal with the life and work of Nikola Tesla and the fields close to his research work as well as that of secondary literature necessary for the work of the museum staff. This is why there are two segments of the library: the personal collection of Nikola Tesla and the museum collection, which has been continually supplemented and increased.

While the museum preserves and registers archive material belonging to Tesla's legacy in the archive department, the library deals with printed documents. As for the form of the documents, the library holds and registers monographs, series publications and newspaper clippings.

The personal collection segment of Nikola Tesla's library preserves, processes, and uses monographs, series publications and newspaper clippings that Tesla himself used in his work.

During the first collections processing that started in 1963, the inventory of series and monographs was partly done. Only in 2001, catalogs were established with the use of the “Biblio” computer program for libraries. This program was used to make a list of the monograph collection and a professional catalog with author and subject entries was created. Up to then, reference card catalogs were used, but were not prepared according to library standards.

The final inventory of the monographs collection is: 904 titles, 939 first copies and 232 duplicates, making total of 1,171 separate volumes. The contents of the collection are various. It consists of publications from the field of science (Maxwell, Einstein, Kelvin and many other lesser known authors) technology (first of all, numerous engineering reference books), medicine and stomatology (Tesla dealt with high frequency currents and their application in medicine and he liked to cure himself as well), mathematics tables, and the books from the field of literature, (Manzoni, Leopardi, Dučić, Rakić, Fėnėlon, Voltaire, Serbian folk poetry...) philosophy (Lao Tse, Marcus Aurelius); among the books there are encyclopedias and dictionaries, monolingual and bilingual, and the most beautiful and best one is Webster's New International Dictionary of the English Language, 2nd ed. unabridged, from 1941.

Regarding the type of publications, the library has numerous technical reference books, off prints even 84 of them, as well as 80 prospectus of various equipment manufacturers, - that are not only advertisements for they have technical characteristics of the products. Since this collection is relatively small, those publications have not been separated into a special group, but are cataloged within the main catalog of monographs.

From the books that are not monographs but are cataloged within this part of the personal collection, printed documentation regarding trials (litigation over patent priority) should be mentioned, whether they were courts of law or Patent Bureau of the U.S.A. Two additional books of bound Tesla patents have also been included in the catalog.

Most of the books are written in English (almost 70%), about 14% in Serbian, and other languages present are German, French, Italian and others. This distribution of languages brought about the use of Latin alphabet for catalog entries.

According to one of Tesla's original book lists from the 1920s that is preserved in the museum archive, the contents of the present personal collection differs a great deal from the contents documented in the list. Many books from the lists are missing from the present collection but there are new titles as well as new editions of some titles. After establishing the museum (according to the reference card catalog that is not detailed) fourteen titles were missing before the inventory and four more after that time. It would be interesting to know what happened with those books that were on Tesla's list - since it is obvious that Tesla preserved every publication he received, regardless of how interested in it he was. The books that he received as member of the Serbian Royal Academy and Yugoslav Academy of Science and Arts, with the pages that were not cut, showed that he was not interested in the subjects the books were dealing with. It is also interesting that not a single book of poems by Jovan Jovanović Zmaj was found in the collection (Tesla's favorite) or Goethe's Faust (which he was said to have known by heart). The collection does not have a single book by Mark Twain either, although Twain was Tesla's close friend. Hopefully, additional details will be obtained when the archive documents and texts have been completely worked and processed.